Outside the US Embassy in Greece stood a statue of President Truman, at least until 26 July, when a couple hundred protesters managed to pull the statue down. 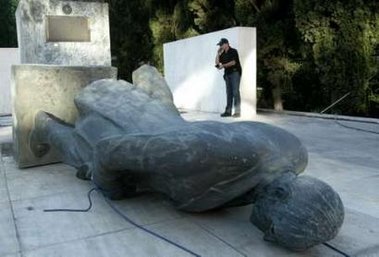 The Truman statue has been toppled at least four times since it was erected on a central Athens avenue in 1963. Greek- Americans financed the monument to commemorate Truman's support for the Greek government against communist insurgents in Greece's 1946-1949 civil war. Harry S. Truman was U.S. president from 1945 to 1953. - Bloomberg 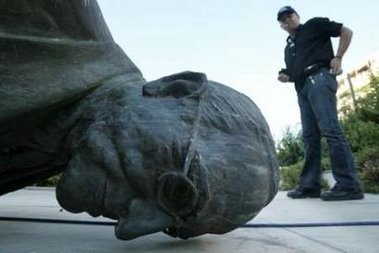 This is supposed to be an example of 'free speech.' It is sad and serves no point. It fact it is actually an insult since it was erected in thanks for a President who helped Greece in it's hour of need.
Imagine a protest in the US where the Greek Embassy is vandalized. The whole point of pulling down the statue was to publicize their protest. In this case they succeeded, to a point. Hopefully, the Embassy there was noting who was involved and has 'locked' them out of ever obtaining a visa to enter the US.

ATHENS, Greece -- Greek protesters toppled a statue of President Truman and clashed with police during demonstrations Tuesday against the fighting in Lebanon.

The ruckus began after 2,000 demonstrators, backed by Greece's largest trade unions and local anti-globalization groups, marched to the Israeli Embassy and also smashed nearby bank and storefront windows.

Several dozen youths broke away from the rally to confront riot police who had ringed the embassy. Police fire tear gas into the crowd and detained seven people. No one was injured. - Washington Post

Lets face it, there are many people who use these protests as an excuse to be violent. We have all heard the whole idiotic "proportionate response" complaint that the anti-Israel crowd had been screaming. Well how would these people explain that knocking down a statue is proportionate, especially since the US is not at war with Greece. Then where was the US response? What, no tear gas? No rubber bullets? (How about paintball guns?) Why do US Embassies still do nothing with potentially dangerous people right outside the gate? Image the outroar if the US targeted those attempting to pull the statue down with a firehose.
Something should be done. The simplest action would be to bring President Truman home. He has done too much for this country to allow idiots to disgrace his honor. It is the right thing to do since striking out at those attacking the statue is politically incorrect. Just remove the target of their aggression and put it somewhere that it will be appreciated..
While we are at it, General Macarthur's statue is still in harms way in Korea. See last August's post for more details. Peter Brookes has written a summary as well as he shares my position that it is time to bring the General back home:

This time, South Korea's anti-American crowd has gone too far.

Uncle Sam-bashing is, unfortunately, quite popular these days among South Korea's left, teachers and youth - burning the Stars and Stripes and massive anti-U.S. street protests are all too common.

But now South Korean radicals - many of them de facto North Korean pawns - are threatening to tear down the 15-foot tall statue of U.S. Gen. Douglas MacArthur at Inchon, the site of the intrepid landing that changed the course of the bloody Korean War.

With U.S.-South Korean relations already on the skids from disagreements over North Korea's nuclear program to the future of U.S. troop basing, it's a propitious time to bring our Old Soldier home and place him where he belongs - among other American heroes on the Mall in the nation's capital.

For the last six months, activists have gathered around MacArthur's statue above Inchon harbor for anti-American/anti-alliance hate-fests, including violent attempts to topple the monument. The latest rally was on Sept. 11, a date plainly chosen to sting Americans. - Heritage.org

What wonderful people. If only we could all live in a world as great as North Korea. Why don't these people just move to North Korea. There surely can't be a huge waiting list to do so. Of course, the US has not left. That must be the problem. Well that might be about to change.

Having exchanged views with the South Korean President and reviewed the situation with regard to the status of U.S. forces and the state of the alliance, I have concluded that enough time has passed for Seoul to be up-to-speed in terms of providing for its own defense. I support a transfer of wartime operational control of the forces of the Republic of Korea to their own command at the earliest possible moment. The appropriate time has finally arrived, after more than a half century of sacrifice by United States Armed Forces in Korea. The American people welcome Seoul's expressed desire to take charge of its own defense in wartime.

As a veteran of the Second World War who served under the command of General Douglas MacArthur in the Philippines, I felt it a great honor to be able to lay a wreath at the General's statue overlooking Inchon Harbor and so to pay tribute to his memory. However, this statue stands for more than just one man, great a man though he was. It stands for fidelity. In times of war and in times of peace, the American people have stood with the people of South Korea. In times of tension and in times of calm. In times of want and in times of plenty. This is the enduring message of Inchon. - Newswire

Blah, blah. These people are not interested in listening or even reviewing history. It is time to pull out. Time for those 18-14 year old South Korea kids to participate in protecting their own country. You don't see the North using soldiers from anywhere else. If the north is not a threat, then there is nothing to worry about.

With Greece, we should take back President Truman statue with a reminder to them that, Greece was part of the Marshall Plan and my uncle was on ships that not only shipped them food etc, but donkeys too! The Greeks needed them to push supplies over mountains. Also both Greece & Korea sign a agreement that you will never ask for USA help in the event of an attack. They will never do it and need to tell their people why the won't. The young ones won't know what fear/death is till it hits them. It's not the USA that's the problem.

US involvement in Greece was AGAINST the majority of the population. We saved them from THEMSELVES by installing a Nazi-leaning coup to protect them from their own socialist leanings.

In South Korea, we 'protected' them by installing and backing Syngman Rhee. It's appropriate, since in 06 Rumsfeld said America needs a new Syngman Rhee in Iraq.

MOST people around the world would be more than happy to do without our 'help', and they are expressing that all the time, outside our own pathetic ego-centric Superman paradigm.