Zimbabwe has been in the news for all sorts of bad reasons, most recently for the hyperinflation of its currency. Zimbabwe's decline really started when the Government started taking commercial farms from ('native') White landowners and distributed them in pieces to native blacks for subsistence farming. Thanks to satellite imagery, we can now see the damage that has been done to the country's agriculture industry as a result of this program.

Land reform begun in Zimbabwe in 2000 was supposed to redistribute land from predominantly white-owned commercial farms to much poorer black farmers who toiled on communal lands. Proponents argued that the redistribution was necessary because commercial farms occupied the most fertile lands, leaving only dry, dusty land for communal use. This rationale reflects confusion about cause and effect regarding land ownership and land quality. In the "Before" photo below, the dry communal lands on the left are sharply delineated from the green private farms dotted with lakes and ponds on the right--so sharply that soil quality and rainfall are unlikely to explain the difference. Now click the arrow to see what happened after land reform. The dams and irrigation systems on the private farms collapsed, making them look more like communal lands, to the detriment of all. - Center for Global Development (Click to read more.)

So not only did the blacks working on the farms lose their jobs when the land were seized, but thanks to poor planning, they are also losing the land itself as it begins it's transformation into desert. 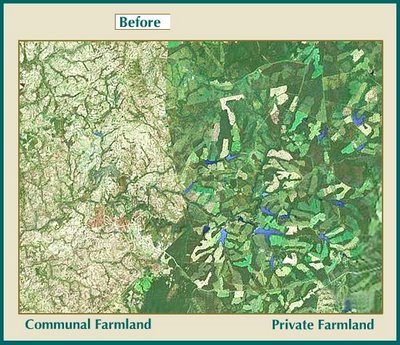 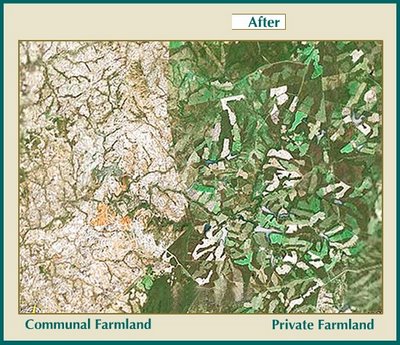 Notice how all the bodies of water are gone. This is essentially an internal matter for Zimbabwe. However, at some point the rest of us will have to pay for the criminal activity of the current Government there, while at the same time being on the receiving end of complaints that the destruction of the country was somehow really OUR FAULT and not the fault of the President of Zimbabwe, President Robert Mugabe. (As an aside, Zimbabwe has banned the movie "THE INTERPRETER" which is claimed based on Zimbabwe. See here.)

This is just one more failure of the International Community (the UN) to have any positive effect in countries governed by maniacs. And yes, I think we should interfere in cases like this when countries are on the path of self-destruction. If nothing is done, Zimbabwe will experience a civil war within the next year or two.

Zimbabwe used to be an exporter of food products. A bread basket of Africa. Sadly, it is now an importer of food aid. That's how Africa defines progress.

Scorched Earth in Zimbabwe: Before and After Satellite Photos - Center for Global Development