Welcome to the 21st edition of Maritime Monday.

This Weeks Photo:
Here is a photo of the Christening of the Gibraltar-Flag vessel MV ANDANTE owned by Briese Schiffahrts GmbH & Co. KG of Germany (homepage). It was christened in August 2005. 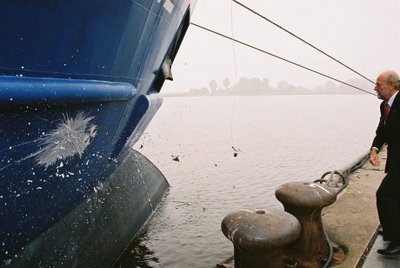 (Christening the Ship)
This weeks items:

MarEx Newsletter has coverage of the disturbing discovery of a suspected jihadist who managed to sign onto a US-Flag vessel as an ordinary sailor (an entry-level position).

Sailors, Mariners & Warriors League has the mystery of a US Navy nuclear sailor who has been held in the brig in secret for four months.

Diesel Duck at The Monitor has "Lifeboat Safety".

EagleSpeak has coverage of a death during the COUGAR ACE recovery mission.

Defense Tech has the disturbing story of Russia constructing nuclear plants, on barges. Sounds like a great idea, doesn't it....

Common Dreams has "Plague of Plastic Chokes the Seas".

The Stupid Shall Be Punished (Sub Blog) has "But my recruiter told me."

Lawyers, Gun$ and Money has a summary of the HMS DUKE OF YORK in "Sunday Battleship Blogging".

Columbia River Bar Pilots has a gallery of ocean going vessels that use their services as well as some rough weather bar crossing photos.

Waking Hereward has news of an internal UK fight between England and Scotland over mackerel in which the harvest has been claimed by Scotland for Scottish fishermen.

Divester has news of Vietnam planning to cut its fishing fleet nearly in half.

Mexico is about to get it's first WIMAX wireless system. It will be deployed in the Gulf of Mexico covering 11 oil rigs. WIMAXXED has the story.

DHS OIG – TWIC has significant security vulnerabilities - The Department of Homeland Security (DHS) Office of the Inspector General (OIG) released a heavily redacted version of its report on the Transportation Worker Identification Credential (TWIC). The report finds that significant security vulnerabilities existed relative to the TWIC prototype systems, documentation, and program management. Due to the number and significance of the weaknesses identified, TWIC prototype systems are vulnerable to various internal and external security threats. The security-related issues may threaten the confidentiality, integrity, and availability of sensitive TWIC data. Until remedied, the significant security weaknesses jeopardize the certification and accreditation of the systems prior to full implementation of the TWIC program. OIG-06-47 (August 4, 2006). - Dennis Bryant

The TWIC program has been a mess for years.