Alaska: All Your Taxes Are Belongs To Us

Note: This is written about PRE-Governor Palin who assumed the office of Governor in December, 2006. This post was written in August 2006 when Frank Murkowski was Governor. (Note added 4 Oct 2008)
If any state can lay claim to being the biggest money leech, it has to be Alaska. This is the state whose Senators manage to sucker the rest of us into paying for not one, but for two bridges to nowhere.
The only people who don't seem to pay taxes are the people who actually live there. Not only do they not pay state taxes, but the state rewards them with a piece of the oil revenue as a reward for not moving out of the state.
Despite receiving a fortune from oil revenue and tax money the rest of us sent to Washington, the residents of the state have now passed a ballot measure to tax any of us who actually bother to visit their state by cruise ship $50 each. That's $100 a couple. That's called gouging.
It doesn't end there either. They will also tax the cruise lines 33% on their gambling profits. Kind of rich isn't it.
Now don't kid yourself into thinking that anything good is going to be done with the money. They use Federal money for state programs, since they don't collect income tax. Worse, is that our taxes they do receive are completely wasted. Alaska can thank their two senators (the infamous Ted Stevens, Republican, and Daughter of the current Governor, Lisa Murkowski, Republican, appointed by the Governor) for their ability to bring pork back home.

One pork project that the Bush Administration cut, that Senator Murkowski has been whining about, is Alaska's Village Safe Water Program. (See more on that here: Alaska Screws over Rural Residents in Quest for Pork) It's not that the President has anything against Alaskans without running water, he has a problem with a program that the Government rates as "Ineffective." 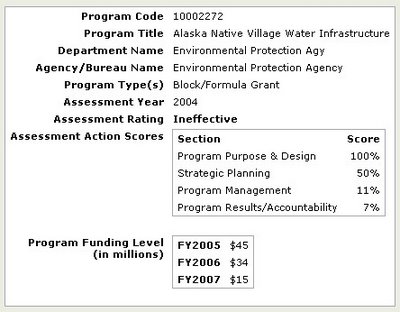 The program is so ineffective, that earlier this month, the city of Hooper Bay, Alaska burned to the ground for lack of water to fight the fire with. Despite the safe water program spending millions on Hooper Bay, there is still no running water. You would think that the program would now work overtime to bring running water to the town. Well yes, and no:

As for the new school, the state's Village Safe Water program is pitching in there, Cowart said. The school was under construction and scheduled to be completed in December. The state program is now running work crews around-the-clock to get the job done sooner, he said. - adn.com

So they are working around the clock to build a school. No mention about running water. Sounds like money is being siphoned out of this program to cover expenses that should be paid by the State of Alaska directly. This would be in line with Federal audit findings:

Q: Are funds (Federal and partners') obligated in a timely manner and spent for the intended purpose? NO

Q: Does the performance of this program compare favorably to other programs, including government, private, etc., with similar purpose and goals? NO

Explanation: This program does not compare favorably to other regionally-focused drinking water and wastewater programs. While Alaska projects present special problems not faced by other water infrastructure programs, this program appears to have inadequate program management, which hinders its ability to track performance and ensure results.

Read the rest of the evaluation here.

So what about Hooper Bay, why does it not have running water? Well take the following from the Spring 2006 Edition of Alaska's Village Voices:

Construction on the water and sewer project will begin this summer and, while it is officially a city project, it likely would not be happening now if Sea Lion (note: a company in the city) had not strongly thrown its support behind the city to help them overcome some bureaucratic hurdles thrown after state officials sought to disqualify the Hooper Bay project due to a perceived shortfall of water payments from village households. “It seems like outside entities had a challenge and wanted to put our village safe water on hold,” Naneng says.

overseeing is the $43 million water and sewer construction project that is expected to begin this summer, although Murran notes that the State has thrown up obstacles before. “When I started this job four years ago, the state put on a condition that they will not operate a water and sewer plant if 50 percent of the villagers have not been paying the $25 fee (for use of the washeteria).” This was a problem, Raphael explains, because the homes of the 1,133 Hooper Bay residents are spread out over a large area. Many people have small cash incomes and sometimes haul in their drinking water from other sources and, as a result, many households had fallen behind, bringing the number to less than 50 percent.

“So we got together and our village corporation was willing to subsidize the fees.” Sea Lion was also able to help the city convince the State that water and sewer fees paid by it, the school, and the upcoming sub-regional clinic should also be factored in. This brought the total to above 50 percent.

“Then the state brought it up to 75 percent.” That hurdle was met as well. “Hopefully, we will complete this water and sewer - unless they come up with another lulu,” Raphael says. Raphael estimates that the project will bring 20 jobs to the city during construction, with some laborer rotating through them in two week shifts. Once it is completed, three new full-time workers, in addition to those already employed at the washeteria, will need to be hired.

“Water and sewer will be a real benefit to the people of Hooper Bay,” Raphael says. “You won’t have all this raw sewage. It will help stop the spread of disease. We will have cleaner water, and won’t have the potential of contaminated water.” The projected fee will be $85 a month per household, and households will be required to be caught up on their recent $25 washeteria fees before they can be hooked up.

From this summary above, the Federal Government might as well just cut all the funding for Alaska's Safe Water Program because these Alaskan's are never going to get affordable running water. Really, why are we sending all this money to help the rural Alaskans when the State of Alaska makes the requirements impossible for people to actually receive the aid. Really, if they can't afford $25 a month now, how are they going to afford $85? Especially since they can get water elsewhere, just not out of a faucet. Considering the comments above, do you now see the following in a different light:

Residents in 5,000 homes in rural Alaska live without running water and sewage systems. Their bathrooms are often buckets that must be hauled to landfills or a sewage lagoon. For drinking water, people go to ponds to chip ice in the winter and collect rainwater in the summer. The Bush administration's budget proposes reduced funding for the state's Village Safe Water program by 75 percent. Ashley Gross of the Alaska Public Radio Network reports. - NPR

It's a wonder that Bush didn't kill the program entirely.

Talk about biting the hand that feeds them. Tourism has to be one of the biggest employers for the state. Sure Alaska is a big draw. My wife and I have wanted to go on a cruise there but have not as it's already damn expensive. From the East Coast you can probably expect to pay over $1,000 each for an Alaskan Cruise before all the 'extras.' Think of the alternative destinations that will now be more attractive once you factor in this additional expense.

First you have the Caribbean where most of the cruise passengers end up. Many taking multiple trips there, and none to Alaska. Then you have non-cruise options. I just bought tickets to Finland for $600 each. We will be staying with family and friends, but even if we didn't we can rent a fully furnished apartment for under $300 a week. Finland not your thing, well Iceland Air has all sorts of specials to Iceland and the rest of Europe for well under $1,000. This new tax is sure to put off some tourists from visiting. (Over at a cruise message board, many people expressed that they would go, but would be sure to curtail their shore-side spending in direct proportion to the tax.)

Oh yes, the purpose of the tax? It is to ensure that the cruise companies pay their fair share for 'using' Alaska's nature and the damage they do to it. Too bad they didn't bother to calculate the benefits the cruise industry contributes to their state. Funny thing is, this tax might actually reduce the 'damage' being done to the state by reducing the flow of tourists to Alaska, but at what price? (Less tourists, resulting in less ships, and less tourist dollars)
This new cruise tax is simply Taxation without Representation. I am not sure if this tax has a name or not and I could care less what they intend to call it or what they intend to do with the money (which is vague). Lets just call it what it really is, the Alaska Fuck You Tax.

P.S.
If I had to guess, I would say that it is Alaskan Senator Ted Stevens who has placed a 'Secret Hold' on a bill for open accountability of spending on Government Projects. After all, with the amount of Government money that they receive, and the heat they are already getting, it makes sense that they would not be interested in more 'openness.'(Just a guess.)

Note: This is written about PRE-Governor Palin who assumed the office of Governor in December, 2006. This post was written in August 2006 when Frank Murkowski was Governor. (Note added 4 Oct 2008)

(Title inspired by the Jawa Report)

Please limit comments to those that contribute to the discussion. (No spam!)