OK, my turn to explore the world of MSM photo fakery. I chose to take a look at some of the missile pictures taken in Lebanon. For starters we have this photo by AFP photographer Hassan Ammar: 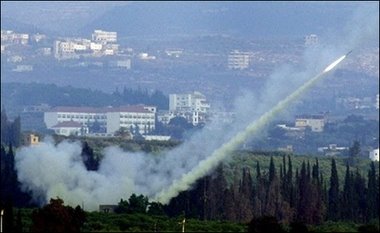 Hezbollah militants fire a missile from the southern Lebanese city of Tyre. US Secretary of State Condoleezza Rice has arrived in Beirut calling for an urgent ceasefire in the Lebanon conflict even as Israeli troops were locked in deadly combat with Hezbollah.(AFP/Hassan Ammar) - AFP Yahoo News

This is a great shot. The photo is clear and the missile itself is sharp and not just a blur. I would say that he managed a lucky shot. I would think that you would have had to plan ahead to catch a picture like that. Make sure that you have the right settings on the camera and if you are using a film camera, have the right speed film loaded to take this kind of picture. After all those missiles are quick. I would even think that you need to be expecting the missile and have your finger on the shutter. Even still you would need a good deal of luck (or someone to advise you of the attack earlier). In his case, his luck did not end here. You see, this was his second missile photo of the morning. This photo has a time of 0705AM on 24 July. The first photo was posted at 0614. 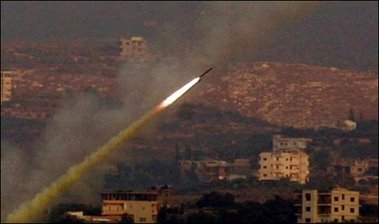 Hezbollah militants fire a missile from the southern Lebanese city of Tyre. US Secretary of State Condoleezza Rice has headed to the Middle East calling for an "urgent" ceasefire in the deadly conflict in Lebanon, where fierce fighting erupted as Israeli troops pushed deeper into the territory.(AFP/Hassan Ammar) - AFP Yahoo News

That is amazing. He managed to catch two missiles launching from apparently different locations. Well, in both photos it appears that the missile in the photo is not the first in the salvo, giving him a heads-up in order to take the picture. But wait, are these two separate photographs or just one? Look at what you get when you superimpose one over the other: (Click to enlarge) 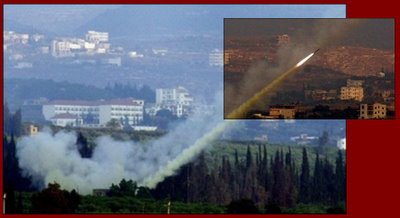 Wow, they appear to be parts of one and the same photo. Now, there is nothing in the photo postings that these are two separate launches. However, I wonder if the smaller picture was darkened to go with the earlier time of day for the posting of the photo. I can't tell if these were supposed to be taken on the 24th or the 23rd as AFP did not state the day that the photo(s) were taken.
Is this dishonest? By itself perhaps not. Then again, how were these photos marketed/sold to AFP? What story did the photographer send with these pictures? I naturally assumed that they were two separate events. It was only once I discovered how few live missile shots were actually out there and after I found this photo that I suspected that something was not right: 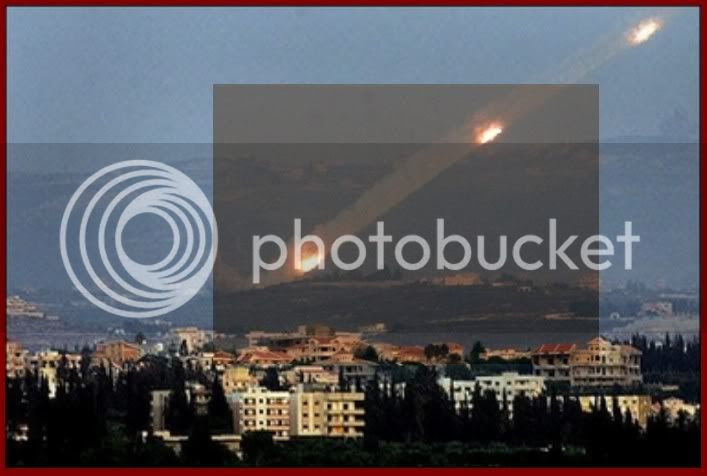 This is actually the following two photos superimposed, with the smaller one cropped slightly by me to the point of the smoke on the left and the building on the bottom right in order to better line up the two photos. 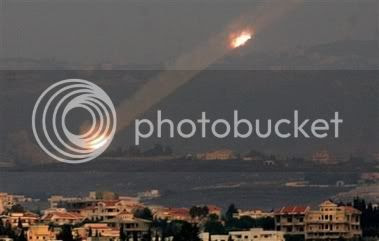 Rockets fired by Hezbollah guerrillas from an open area are seen in the sky as they head towards Israel close to ten kilometers (six miles) from the port city of Tyre southern Lebanon, Sunday, Aug. 6, 2006. Hezbollah guerrillas killed 12 soldiers at a meeting point for reservists going to Lebanon, and pounded the city of Haifa with a heavy barrage that crushed residential buildings and caused dozens of casualties, witnesses and hospital officials said. (AP Photo/Kevin Frayer) - AP Yahoo News (AP - Sun Aug 6, 4:05 PM ET) 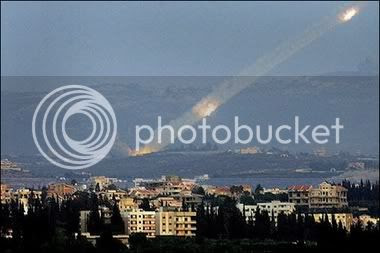 Katyusha rockets are fired from the outskirts of the southern Lebanese port city of Tyre into Israel. At least 15 Israelis were killed and dozens wounded by Hezbollah rocket fire as Israel faced its bloodiest day on the homefront since launching its offensive in Lebanon.(AFP/Samuel Aranda) - AFP Yahoo News (AFP - Mon Aug 7, 4:56 AM ET)

The lights of the missiles would indicate that the lower picture was taken first with the second photo following quickly behind. Did I mention that these two photos taken within a second of each other were taken by two different photographers? Just imagine that two photographers both manage to be in the same/right spot to get a picture of a missile attack with only seconds to react, that they manage to both react within a second (or two) of each other. It makes me wonder, did someone guide these two to this specific spot. If so, who? If they were brought there by Hezbollah, why was this not disclosed.
Not for anything, but the foreground in those last two photographs just doesn't look right. Unfortunately, the photos are too small for me to investigate that further.
No need to believe me, download the photos and play with them yourself. Then draw your own conclusions.
One more thing. I thought that UNIFIL peacekeepers were unarmed: 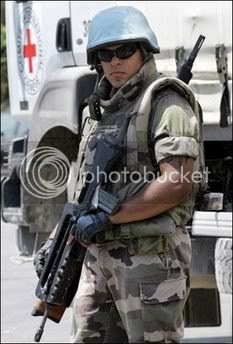 Does this guy look unarmed to you? Not only does he have the weapon he's holding, but there is another slung behind him.

Is this a breech of the UN UNIFIL mandate? (I don't think he cares.)

Reuters Fakery - Only the Beginning
Posted by Fred Fry at Tuesday, August 08, 2006

Interesting points about the rocket launches. However, here's something about those rocket launchers and cameras that might be useful to keep in mind.

To where to point the camera in these rocket launches, I'd suggest that after the first rocket is launched, your eyes and ears will point you towards the source, and since we're talking about katuyshas, where there's one launch, there's bound to be more. So you could simply point at the origin of the vapor trails, set your camera to the sports setting (multiple shots per second, and off you go). In no time, you could end up with a couple of usuable shots. Pick the best of the bunch, and submit to your photo editor for payment. With a couple hundred rockets being launched every day from a relatively small area all someone has to do is pick out a relatively high vantage point and wait for the rockets to start flying.

As for the UNIFIL soldier, the UNIFIL website provides that while there are several hundred unarmed observers, the UNIFIL contingent has about 2000 lightly armed soldiers as well. The bulk of those forces are not at the outposts that Hizbullah uses as cover, but at bases that the UNIFIL maintains in South Lebanon.

I persoanlly wouldn't care if I was the UNIFIL member pictured. As many UN people that have already been killed by friendly fire, and who knows what those Hezbollah nuts might do?

I'd be armed to the teeth, my friend. Wouldn't you?

Yes I would and I'm glad to see that this guy was. It was idiotic to have the 'observers' on the border unarmed. Good luck getting the UN to admit that.

Yes, I can see in the photos the smoke trails that these were not the first of the rockets to be launched. (I might not have made that clear in the post.)

I don't think it is too easy to actually catch the launching of these rockets. There are very few pictures out there of actual launchings. Or perhaps those types of photos do not further the Hezbollah agenda...

Your explanation would explain why there were two photographers up there that morning. They decided to wait it out together. But why that morning? Someone give them a head-up? And why were they basically standing on top of each other when they took the photos.

The guy with the rifle is french, so technically, he is unarmed.

The background doesn't look fake to me: it looks to me like the photo was taken with a very long lens, or perhaps cropped from a much larger photo. If you can only find thumbnails then it's probably because the original picture was cropped.

On the other hand, if you find a high-res version of the photo then it means that it was taken with a long lens pointed in exactly the right direction - which is rather suspicious.

Fred - there are two seperate UN missions: UNIFIL and UNTSO. The observers killed were from UNTSO which is why they were a mix of nationalities and unarmed. UNIFIL has battalions from different countries (Ghanaians and Indians for example currently IIRC) and they are armed. Their mandates are a bit different as well.

On the rockets - is it really that hard to get a photo of them? Hezbollah has been firing hundreds of the things virtually everyday. Presumably if you are hanging out in the South of Lebanon for a long enough with a camera you'll see them. I don't see what Hezb would have to gain from having these pics taken - all it shows is exactly what the Israelis claim: that they are firing from in or near civilian areas.

Interesting stuff. However, I'm sure others have already pointed out that the UNIFIL mandates require the UN troops to be defensively armed, including heavy machine-guns, mortars, anti-tank weapons, etc., as over the last thirty years they have been attacked by the PLO, Lebanese Christians, Syrians, Israelis, and various Lebanese Moslem and Communist factions in South Lebanon, resulting in many UN deaths & injuries. Only the traditional UN Observers (such as UNTSO, also in that area) are unarmed.
T. Koppel