UNITED NATIONS (Reuters) - Former Democratic presidential candidate John Kerry said on Thursday he was seriously thinking about another White House bid in 2008 and will decide before the year is out.

"I will make that decision toward the end of the year, but I'm thinking about it hard," Kerry said in response to a question at the Latin Economic Forum at the United Nations.

I wonder if he has been waiting to talk about running for President in 2008, but had to go to the UN to find a reporter willing to ask him if he's going to run for President since the American MSM is hoping that he'll go away.

I hope that Senator Kerry is joking. Surely he is aware that he lost by more than 60,000 votes in Ohio. According to the US National Archives, Senator Kerry lost Ohio by 118,599 votes:
OHIO 2004 Results 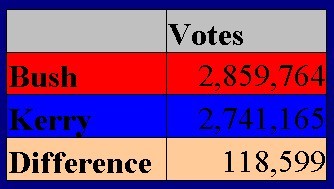 Was that a slip of the tongue or was this an intentional act of misrepresentation. If he said that he lost by 100,000 votes, that would be close enough, but he cut his loss in half. Then again, since he is giving this 'serious thought' then I suspect that he fully knows (to-the-vote) how much he lost by. That means that this must be the official team number. It is a good strategy for him. First get the word out that you lost by a much smaller margin than you really did. This would then make the 'Bush stole the election' easier to swallow, especially by your supporters who want to believe that their candidate really won.

Kerry has a much bigger problem. It appears that he thinks that he'll be running against President Bush again but that's not going to happen. That means that whoever wins the 2008 Democrat Presidential nomination, they will most likely have to run against a Republican nominee that is surely to be more popular than the 'polarizing' Bush. This brings me to question number one that I would love Kerry's handlers to answer:

Senator Kerry could not beat George Bush in a run for President, how on earth is he going to beat ANY Republican Candidate, who is sure to be much more well-liked than the Universally-hated Bush?

I suspect that the good Senator will be needing a hell of a lot more than 60,000 votes in Ohio. (Not to mention a couple million more in Florida.) But this is all academic, as Kerry will never get the nomination of his own party. If it were up to the Republican's, he would get the nomination in a heartbeat. Thankfully for the Democrats, it's not.

(Now what the hell was he doing asking people at the UN to help him find votes?)

Seems that Kerry is talking some more hot air. Instead of dissecting this idiot some more, I ask that you go to Environmental Republican who has already done it.

I agree though, if Kerry were on the Democratic ticket in '08, he'd be killed. I wish.

I suggest you check your math skills. According to you Kerry did not say anything about 60,000 MORE votes in Ohio; he said 60,000 votes in Ohio.

Don't bother posting something criticizing my tone of voice, anonymity, or grammar because I will not be returning to your "blog" (if you can really call it that).

Senator Kerry, is that you?

Please come back. I have idea what point you are trying to get across with that comment.