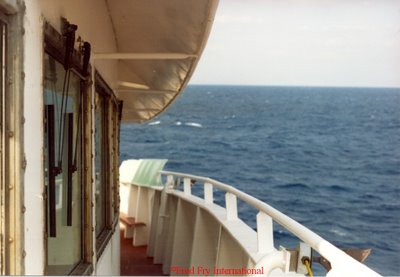 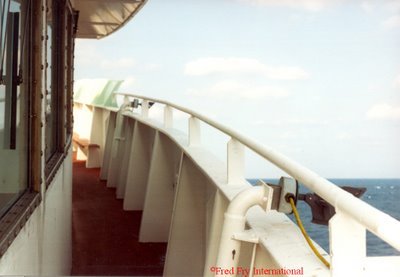 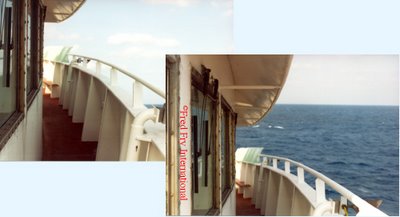 Pike Place Politics has coverage of 22 Chinese stowaways that were found inside a 40' container that arrived at the Port of Seattle. AubreyJ.org has more coverage here. Both bloggers ponder what else could have been in that container other than stowaways. You can read the the US Customs and Border Protection (CBP) Press release here. Let this be a lesson to everyone who is thinking of doing this; SHIP YOURSELF TO MEXICO, then just walk across the border. (And never, ever, go walking around the terminal unless your walking out.)

Several of the Chinese were initially spotted by private port security personnel wandering in a cargo area at around 1:00 a.m. today. The port personnel contacted the Department of Homeland Security and ICE agents and officers from U.S. Customs and Border Protection (CBP) responded.

EagleSpeak also has coverage of the 22 Chinese stowaways. (Including a pic of the inside of the actual container.)

You can also find a great chart marking the piracy situation off Somalia at EagleSpeak.

Last week I included posts about the US Navy donating Battleships to be converted into museums. Spank That Donkey points out that the US Marines would like to keep the Battleships USS WISCONSIN and USS IOWA in at least reserve status, ready to be called back to active duty in about 6 months time.

Spank That Donkey also notes the ending of over 155 years of the US Marines guarding the US Naval Academy and the crypt of John Paul Jones.

The Government of Estonia has revisited the M/S ESTONIA sinking and recently released a report which criticizes the official report. Itching for Eestimaa wonders if the conspiracy theories surrounding the sinking will eventually reach the level of the JFK theories. Sweden’s The Local paper has the story here. Hello Estonia has coverage of the Finnish Investigator’s reaction. Let’s just say that they are not happy.

I too believe there are flaws in the ESTONIA report. Take this:

2.13 Nobody saw the Light in the Garage from outside!
The Commission has stated that the ramp was pulled fully open at 01.15 hrs and that the generators stopped at 01.25 hrs. The lights were on in the garage well after 01.15 hrs (otherwise Treu and Co. could not have seen anything) and this light should have illuminated the sea outside the bow. Nobody saw it from outside.

You would have expected the persons on the bridge to see the light spilling out through the open ramp before hitting the first wave. It may be that the first wave smashed all light fittings in the garage, but the three persons in the ECR saw the ramp two minutes after the listing on the monitor and for that you need light. The three witnesses saw the light on in the garage after the listing, so you would expect the light to spill out on the ocean. But nobody saw the light from outside. The conclusion is that the ramp was never open. - Disaster Investigation

One of the official contentions is that the Bridge crew did not know that the bow had fallen off because they could not see it. As the comment above notes, there were other ways to know that there was a problem. You can't see your headlights either but you surely know when they go out at night!

Greenpeace in the UK has coverage of the arrest of an unlicensed fishing vessel that they conducted with local authorities. The unlicensed ship is from China and apparently was planning to hide the deception by packing the fish in boxes that bore the names of ships that were licensed to fish. Pretty damn sneaky.

Also, you can read this eye-opening entry in the Greenpeace 'Crew and Activist' weblog. Be sure to also check out the photos of the Chinese 'zombie' ships of West Africa.

Seeker Blog comments why harvesting only larger fish is a bad idea, and has a study to back it up.

The Guardian UK paper has this story about Dubai DP World hosting the US Navy in Dubai: Friends in Dubai angry as entry into America is halted

Whisprwave has coverage of the AFL-CIO sending a report to Congress claiming that Walmart is blocking efforts to secure US Ports. (Note: I think the AFL-CIO is simply bitter about Walmart fighting their attempts to organize their offices. If anything, Walmart is not lax in it’s logistics operations. Anyway, it is the Government that has screwed port security, not business.)

Bloomberg.com has coverage of some of the massive amount of legislation recently introduced in Congress concerning port security. “Congress Ready to Tighten Security, Add Detectors at U.S. Ports” Personally, I think it’s better to inspect the containers before loading them for the US. After all, what good is it to discover the nuke as its on its way out the gate in Baltimore when the intention might be to get it as far as the port then blow it.

Biometric Digest asks "Just who are all those more than 900,000 men doing the unloading and checking in U.S. seaports?" and points out the failure of the US Government to document them.

Note: I wonder how Democrats (and some Republicans) are going to be able to justify their calls to turn container ports into fortresses, searching everything going in and out, yet at the same time fighting efforts to secure our other borders.

Strategy Page has tips on how to spot a pirate.

Many thanks to carnival supporter Cannoneer #4 for passing on some of the recommendations above.

Ever wanted to sing a sea Chantey but didn't know the words? Folk Den has a whole 'Seafaring' category full of lyrics including the British version of 'Spanish Ladies.'

Weekly Maritime Reference:
This week we visit the term 'Short Sea Shipping' which has been a hot topic in Europe for years and now the US seems to be taking it more seriously:

Domestic short sea shipping is defined as a freight service operation carrying either containerized or trailered cargoes via coastal waters, lakes, and river systems of North and Central America, having at least one port of call in the United States. In particular are those services where the shipper has a true intermodal choice between moving units by water or using one of more land alternative (highway and/or rail) or, in some cases, air transportation. Types of vessels that are employed in domestic short sea shipping can be classified as the following: tug and barges (sea-going), tug and barges (river type), small ships, liquid bulk, dry bulk, break bulk, intermodal (container, roll-on/roll-off, lighter aboard ship), and rail-ferry. - MARAD

The EU also has a Short Sea Shipping website. Lots of detail here if you have the time and interest to try and dig through it all. If not, you can always take a look at this summary brochure. (PDF Document)

49 people injured - 13 in a serious condition near the city of Kagoshima on the southern island of Kyushu.

Goodness:
This sounds tragic, just as tragic as one our our subs accidentally surfacing into that Japanese ship about 5 years back... (near Hawaii)

Both of these accidents were accidents no doubt... but the whales did not have an embassy or ambassador to "demand reparations" from the Japanese, (who I hear have been fairly predatory in nature towards whales).