Kind of light this week with submissions, but that just means that this week's Maritime Monday is more about what I found interesting. Thanks to those who did submit items.

This Weeks Photo:
In the spirit of Maritime Monday being about all things Maritime, I figured that this week's photo should be a Mobile Offshore Drilling Unit, or MODU for short. This is a picture of a MODU I visited in Scotland. See that crane on deck. That's how you get onboard. 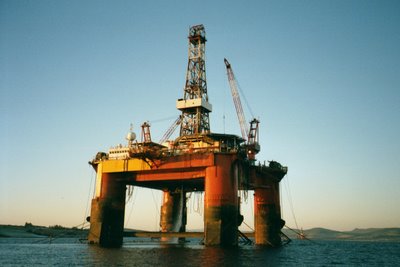 The International Organization of Masters, Mates & Pilots union has news that President Bush will be the first President to be a Graduation Speaker at the US Merchant Marine Academy. Graduation is in late June.

The Washington Post has the story of George Williams, an American found drifting on a raft of oil drums in the Skagerak Sea between Norway and Denmark. He claims to have been thrown off his ship, but will not give the name of the ship. Pretty strange. (Although strange things do happen on Merchant ships!)

DieselDuck at The Monitor has news about the BOW MARINER disaster/sinking off Virginia on 28 February 2004 with the Coast Guard placing a majority of the blame on the Captain.

The Monitor also has a photo collage of the CARNIVAL ECSTASY riding out Hurricane Rita. Be sure to click the photo to expand it!

EagleSpeak has a follow-up to the Egyptian Ferry disaster. Apparently the owner and 'corrupt' Government officials are to blame. Notice how quickly this story dropped from the headlines...

CSO Online has the Story about the Government's research into cargo tracking through the Operation Safe Commerce project. I would love to link to the report findings which were due a year ago, but as the story points out, no report has yet been released.

BBC News has coverage of the upcoming maiden voyage of Royal Caribbean's FREEDOM OF THE SEAS. This will be the world's largest passenger vessel. Cruise Reviews has the press release from Atlantis Charters announcing the first charter cruise for the vessel in January, 07. An all-gay (and lesbian) cruise.

Asian Maritime News has the story of seven Indian Seafarers currently facing murder charges in the UAE. Apparently the victim, another Indian seafarer, was beaten to death while the ship was at sea. The ship is Norwegian (International) Flag (NIS.)

Colton Company has news that the Panama Canal Authority is taking advantage of a backlog of ships looking to transit the Canal by auctioning a few transit slots each day. As their post suggests, read the Authority's terms for the auction.

Splendid Pictures Around the net has photos of the RMS QUEEN MARY 2 inside and out.

The Travel Bloggers has an update on Princess Cruise Line's attempts to avoid another balcony fire like the one that caused extensive damage to the STAR PRINCESS. I look forward to reading the accident report, especially the part that covers the ship's ability to fight a fire on the balconies. Was it that balcony fires had to be fought by dragging hoses through cabins? (I have to say, they have done a good job preventing photos of the damage getting out.)

AllAfrica.com news has the story of the USS CARR visiting (and patrolling) the Territorial waters of Liberia in West Africa. This was done with the consent of the new Liberian Government. The US Department of Defense has a press release covering the new Liberian President's trip out to the USS MOUNT WHITNEY in January to thank them for their presence in the region.

WattHead has coverage (Note: November 2005) about 'Offshore Wind Platforms' based on offshore oil platforms. Now why hasn't anyone thought about this before. (US DOE illustrated feasibility study PDF)

There is no shortage of posts about Japan's plans to legalize whaling.

My problem with the Japanese whaling issue has more to do with the fact that the Japanese Government has been illegally whaling for years, calling it 'research.' I hate liars and for their actions, the Japanese should be ashamed of their lying. If, the existing whale stocks can sustain whaling, and there seems to be evidence that this is true for Minkie whales, then one could argue that international agreements call for fishing/catching/whaling the maximum sustainable catch, even if they happen to be whales.

The Sea Shepherd Conservation Society has been maintaining an anti-whaling program. They have a video clip of their harassment of a Japanese 'research' vessel. Herald Premium Content suggests that anti-whaling nations review the aid that they are giving to the countries that Japan has bought spots onto the International Whaling Commission for, in essence buying their support. Ultima Thule says Goodbye to Moby Dick. Secular Blasphemy comments (scroll down) on the biased reporting in the UK's Independent about the matter.

Most of the whale-Blogging is the result of news coverage in the Independent Online with the stories "The great betrayal: Pro-hunting Japanese seize control of whaling commission" and "So why, exactly, is Tokyo so keen on whale hunting?". Not to pick on Japan too much, Norway and Iceland would also like to see the ban on whaling dropped. These countries should be careful for what they ask for. It might be that many others might be interested in catching whale if it becomes legalized. Don't think that you'll be able to take home the entire catch. As for me, 'Whale Sushi', yum!

The Robert Bond Papers (Canada) has "Offshore oil rigs and the terror threat".

On April 16, 1947, one of the worst harbor disasters in the United States commenced when the French freighter GRANDCAMP, loaded with a cargo of ammonium nitrate fertilizer, caught fire and exploded. The next day, the nearby ship HIGHFLYER exploded. In the then small town of Texas City (pop. approx. 15,000) over 500 people died, about 200 were never located, and many became homeless due to the fires. Most members of the local volunteer fire department were killed while responding to the fires and explosions. The reports of the US Coast Guard Marine Board, the local chapter of the International Association of Fire Fighters, and the National Board of Fire Underwriters are linked.

The Australian / FT Business has a story out of Hong Kong about the views of Hong Kong-based Hutchison Port Holdings on how the US (overboard port security) hardline is killing co-operation needed for port security. As it turns out, they scan every container that is shipped out of their terminal but nobody was looking at the data that they were gathering.

Finally, The Secret Life of Gary has the story about Pirates and Rochester, NY.

Here are some very expensive vessel ideas that may or may never see open water:

Fastship has been planning a fast container service between the US East Coast and Europe with door-to-door service in six to seven days. Service this fast would provide a much cheaper alternative to shipping cargo via air. According to the website, service will begin in 2008. This is if they can obtain the funding to build the terminals, and the ships. Not only will the vessels be fast, but loading and unloading will be done by putting the cargo on rails and just rolling the cargo on and off. I have my doubts, as do many others. Then again, there is no shortage of investor cash out there. Apparently this project has been an ongoing victim of a lack of funding.

Then there is the FREEDOM SHIP. If ever built, it would be by far the largest floating cruise vessel in the world, unable to enter most (if any) ports. Large enough to include a landing stip on it's main deck capable of handling corporate jets. Apparently this project has been an ongoing victim of a lack of funding.

What is probably the longest-running-yet-to-be-built supership project, the America World City / American Flagship Project has been around for over a decade, with no sign of when construction will ever start. Once again, if built, would be the largest passenger vessel, a complete floating city, somewhat more appealing than the much larger Freedom Ship. The ship would be built in the US, crewed by Americans and cruising between US ports. Goals called for a total of three vessels. Apparently this project is an ongoing victim of a lack of funding.

Weekly Maritime Reference:
The subject of this week is Free Surface Effect. Whether vessels stay upright or capsize is due to whether they are stable or not. One issue that effects stability is Free surface effect.

When a vessel with partially filled spaces heels over, the contents of the spaces will shift. The centre of gravity moves over to the side, making the vessel less stable. - Transport Canada

Take a look at this page at Transport Canada for diagrams and explanations how free surface effect effects the stability of vessels.

Here is another page with animation of free surface effect in action. (Free-marine.com)

Free Surface effect is not limited to liquids in tanks. Take the sad ending of the SS NORMANDIE:

On 9 February 1942, sparks from a welding torch ignited a stack of thousands of lifevests filled with kapok, a highly flammable material, that had been stored in the first class dining room. The woodwork had not yet been removed, and the fire spread rapidly. The ship had a very efficient fire protection system, but it had been disconnected during the conversion. All on board fled the ship.

As firefighters on shore and in fireboats poured water on the blaze, the ship developed a dangerous list to port. About 2:45 a.m. on 10 February, the Normandie capsized, crushing a fireboat. - Wikipedia

It was the weight of the water being thrown onto the decks of the vessel that caused the vessel to list and settle at the bottom of the berth on it's side.

More recently is the AL-SALAM BOCCACCIO '98 ferry disaster. Two of the more famous ferry disasters involving free surface effect are the M/S HERALD OF FREE ENTERPRISE and the M/S ESTONIA. Ferries are especially vulnerable to loss of stability due to free surface because of the wide open car decks. Sadly this is still a problem.