Once again the price of gas is on the rise and politicians are out for blood claiming that price gouging will not be tolerated and will be prosecuted. Well I have found a price gouger, but don't expect anyone to make them account for their actions as

the Price gouger is the State of Delaware.

The State of Delaware is not gouging you at the pump. No, they got you right on the highway, charging tolls going north and south on the Interstate I-95 corridor. Of that route, only 16 miles are in Delaware, but it is an expensive 16 miles.

Per Mile we have the following:

That's 28 cents per mile in tolls for Delaware. If New Jersey charged the same rate that Delaware does, it would cost $56 to make a round trip through NJ instead of the $9.90 it currently does.

So how does this compare to the cost of gas?

Take a look at the following table showing the gasoline cost per mile: 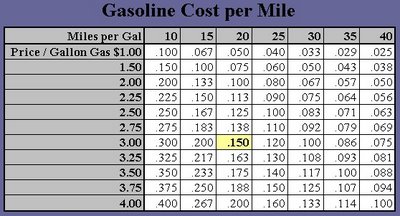 For a car getting a lousy gas mileage of 20 miles to the gallon (highway), it would cost 15 cents a mile for gas with gas costing $3 a gallon. For cars traveling through the State of Delaware up and down I-95, the tolls are at least twice as big an expense as gas, for that portion of the trip.

There is one important difference between the two expenses. The state cannot control the price of gas. It can however control the price of the tolls. As in many states, tolls are partly used for items completely unrelated to the road and bridges that the toll-payers are riding over, in many cases going to subsidize public transportation. (It costs $1 for me to ride the bus to work in VA.)

Congressman J. Randy Forbes of Virginia has a gas price primer on his Congressional website which includes the following graphic explaining the factors determining the price of gas: 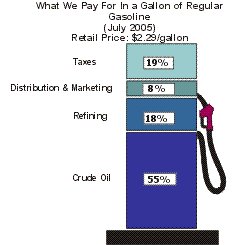 So over half of the cost of gas is related to the price of crude oil, which has been shooting through the roof. The last time I checked, the price of crude oil was controlled more by OPEC than ExxonMobil. Since Crude oil is a record prices, doesn't it make sense that gasoline would be expensive?

Blaming gas companies is just a lame, especially ExxonMobil which is trying to get as much oil onto the market as possible. Some people are even claiming that they have to go to the pawnshop to get extra money for gas. We have all seen these people interviewed on the news claiming that the price of gas is killing them, as they stand next to their NEW SUV. Exactly WHO created the financial difficulties in these households?

Just imagine what the price of gas would be if it was the Government that provided gasoline to America? As far as providing relief, how about reducing the property tax on cars? How about lowering tolls? How about lowering the tax on gasoline? How about allowing oil companies build new refineries? How about not treating oil companies like criminals in California with so many rules and prohibitions that it is nearly impossible to move oil into the state for consumers? How about making better use of oil and reducing demand by better using coal and nuclear?

Take this from Senator Biden:

Biden and 15 fellow Democrats, including Senate Minority Leader Harry Reid, have sent a letter to the President calling on him to support the bill. It would give states new powers to prosecute anyone who takes advantage of short supplies of gas to overcharge for it. - WBOC

The Senator is not bothering to point out that in the last price run-up after hurricane Katrina there were very few gougers in the market. This is essentially a non-issue. This is a classic case of pandering to voters. Fine, the Senator is planning to run for President so this is to be expected. So he should have some idea about what to do about the high price of oil. Why wait until he becomes President to implement it. Why not let everyone in on the secret and ride the credit right into the White House. I suspect that he has nothing. One thing I can guess, he has not problem gouging drivers that have little choice but to drive through his little state and every time we do, we are all reminded of what the whole country could be like if Biden wins the Presidency.