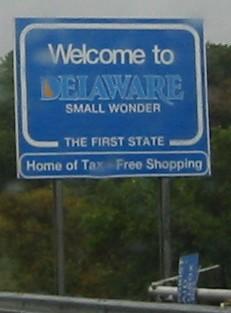 Senator Joseph Biden, Democrat from Delaware, announced in June that he was planning on seeking the Presidential nomination for the Democrat Party for 2008.

Biden has a unique problem against his bid for the nomination. He is from the state of Delaware, and every single person driving up and down I-95 is well familiar with the Delaware stretch of I-95. The state likes to tout that it is the home of "Tax Free Shopping" but drivers know it better for it's high tolls. $3 going north and $6 returning south. That is $9 for a round trip. ($3 is for crossing the bridges from New Jersey) That is pretty expensive for about 15 miles each way. The round trip works out to about 30 cents a mile. In addition to paying the tolls, drivers are often subjected to traffic backups extending halfway through the state. We have a policy of never stopping in Delaware. However, now with the baby, we sometimes need to stop to leave behind a dirty diaper.

Tolls are a regressive tax. That means the poorer you are, the higher percentage of your income you must pay in taxes. These taxes hurt the poor and those on fixed incomes, such as the elderly. Many poor and elderly use I95. The elderly especially as they drive too and from Florida.

Sure, Senator Biden is not the one who is responsible for the tolls, but he is part of the state 'operation' that takes advantage of others to meet the expenses of their state. At some point, he will be asked about Delaware's toll system and if he thinks its fair to those driving through the state.
Senator Biden will have a second problem, being compared with the Democrat Candidate for 2004, John Kerry. Not just a personal comparison, but a comparison of each Senator's home state. Also, lets not forget the 'swing voters' and the Independents like myself. Why would we vote for Joe?: 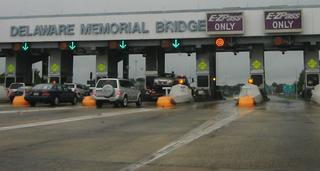