Thanks to all those who submitted blog posts and news articles for this week's edition of Maritime Monday.

This Weeks Photo:
Everyone is asking what exactly is being shipped inside all those cargo containers. The short answer is anything and everything. A nuke in a box is the ultimate dangerous cargo, yet there are many containers that contain dangerous cargo, declared and otherwise. 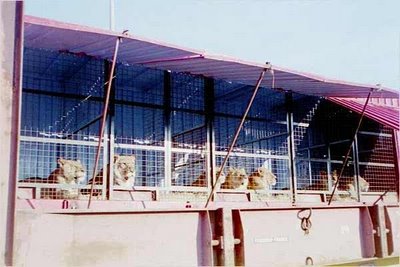 Deep Dive reminds us of the submarine USS Thresher disaster in 1963.

Maritime Ignorants, Beware! Compares two book reviews of "The Outlaw Sea." One by Newsweek and the other by Fairplay International Shipping Weekly as an example of Newsweek's ignorance of the Maritime Industry. (No shortage of that lately.)

Photoreflect has a photo of the impressive entrance to the International Maritime Organization (IMO) in London. While impressive, he calls it 'wasted money.' (But a drop in the UN bucket of UN Waste.)

The Heritage Foundation explains why throwing money at inspecting every shipping container will not improve Homeland Security. They also propose some ideas on how to spend the money if Congress is serious about spending all this cash for cargo security.

Christopher Dare appears to be posting to his blog, In the Merchant Navy, from his ship. His latest post describes the voyage from Singapore to the Suez Canal. The vessel he was on was the 18th vessel in the convoy going through the Suez Canal and does not mention anything about the passage. I suspect that all the Egyptians were hassling the American ships at the head of the convoy for cigarettes, alcohol and anything not nailed down.

Delta Bunny has a great picture of the Liberty Ship JEREMIAH O'BRIAN passing by the California city of Rio Vista.

My Barbados Blog has news that the Barbados Trinidad Fishing Dispute has been resolved. This was done through a tribunal under the United Nations Convention on the Law of the Sea (UNCLOS) and managed to produce a result where "both parties see this decision as a victory." Amazingly enough, the dispute was over the right Barbados fishermen to catch flying fish off the coast of Tobago. (Now lets see if the decision works in practice.)

Law, Society and Sports comments on the legal aspects in getting rid of the French Aircraft Carrier CLEMENCEAU and the legal arguments of the issue.

The BBC has great video of the recent sinking in Tokyo Harbor. "Ship Sinks Live on Japanese TV." Update: I forgot to add that EagleSpeak has more on this story.

Do fundo do mar has an update on the 4 US Ghost Fleet ships rusting in the UK. They were sent there to be broken up for scrap, but that plan ran into problems due to concerns about hazardous materials.

The Northwest Passage in Northern Canada is sure to see more interest from the Maritime Community in the coming years if the ice recedes turning it into a shortcut for cargo vessels and oil tankers. Take a look at Wikipedia for a summary about the passage and it's history. The Renegade Times gives an overview about the upcoming dispute. As a defensive measure, Canada has dubbed the passage as "Canadian Internal Waters." The story is covered in the Marex Newsletter.

Be has more on the Northwest Passage including an interesting $7 investment that might payback millions. This story is derived from Spiegel's "Profiteering from the Arctic Thaw ."

The Yankee Sailor provides us with a lesson in Navy Officer Ranks.

Defense Industry Daily covers the problem of Naval Shipbuilding as each new class is ever more expensive and as a result orders are ever smaller, creating a 'death Spiral.'

Ocnus.net has a story about China's 'Malacca Dilemma.' You see, a great portion of China's oil imports travel through the Malacca Straits. The dilemma (for China) is that it would not take much to stop China's oil flow through the strait, and the Chinese know it.

The UK Marine Accident Investigation Branch (MAIB) issued the report of its investigation into the grounding of a general cargo vessel (the MV LERRIX) off the Darss peninsular in the Baltic Sea on 10 October 2005. The master was on watch, but was extremely fatigued and fell asleep. He had allowed the lookout to go below. The watch alarm was inoperative. The master was using a portable GPS connected to a personal laptop computer, running a pirated navigation program. The program, though, had not been updated since 1999 and its alarm functions were also inoperative. Report No. 14/2006 (PDF). Investigation homepage here. (Note: Per the report: Falling asleep while on watch = 'Involuntary napping')

e-cargonews Asia has a story about the investigation into what caused the explosion on the HYUNDAI FORTUNE. (An explosion powerful enough to throw containers from the stern right over the bridge.)

ABC News 'Primetime' has been investigating the Cruise Industry and has this story: "Former Ship Security Officer Tells How Crimes Get 'Lost at Sea"

Bahama Journal brings us this story of how the International Council of Cruise Lines (ICCL) smelling blood in the water concerning the issue of crime on cruise ships (and the potential to scare away cruisers) is calling for the United States and the Bahamas to sign a bilateral agreement allowing US authorities to 'take action' onboard Bahamian-flagged vessels. The current situation:

The Bahamian Foreign Affairs official confirmed this, and explained that the only way U.S. authorities may now act in the event of an incident aboard a ship flying the Bahamian flag is if that ship is in U.S. waters, or at the invitation of the Bahamian authorities.

Most people are not aware that when they board a cruise vessel in Florida or wherever, it is as if they are in the country whose flag flies on the stern. However, there is an easy solution to this problem that the ICCL is attempting to solve. REFLAG THE VESSELS to the US. No bilateral agreement required.

Thanks to Cannoneer #4 for submitting this great story describing container cargo operations "From sea to land (and back again): unloading and reloading a cargo ship." Keep in mind that Norfolk is rather small and the vessel in the story, MAJESTIC MAERSK, probably is more accustomed to four cranes working on it instead of only two as in the story. (Photo of the vessel here)

Last week I covered the smuggling of 22 Chinese persons in a shipping container. As it so happens, CBP got the name of the ship wrong. It was not the MV ROTTERDAM, but instead the CSCL ROTTERDAM, operated by China Shipping. Wasn't Congress just concerned that a Dubai Company would somehow manage to smuggle terrorists or WMD into the Country? Now we have Chinese being smuggled into the US on a Ship owned by the Chinese Government. (Insert your own comment here.)

Finally, we have A Geezer's Corner sharing "Musings about Submarine Coffee."

US Customs and Border Protection has a Fact Sheet concerning the securing of US Ports. You can read about the Container Security Initiative (CSI) which is the program that stations US Customs officers IN FOREIGN PORTS to inspect cargo being shipped to US Ports before the cargo is loaded to a vessel. They even have a 4 minute video about port security where you can watch Customs officers climbing into containers. There is even a small Cargo and Seaport photo gallery.

Weekly Maritime Reference:
The subject of this week is the 'Rules of the Road' or more appropriately, the Navigation Rules. 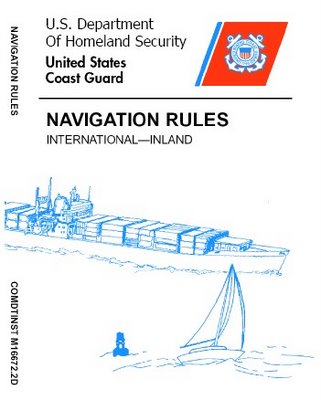 Pleasure boaters are probably most familiar with the 'Law of Gross Tonnage.' While not exactly a rule, it is a good rule to live by. All of the rules are important, and it is important not only to know the rules, but also to understand them. Take Rule 2 for example:

RULE 2 Responsibility
(a) Nothing in these Rules shall exonerate any vessel, or the owner, master or crew thereof, from the consequences of any neglect to comply with these Rules or of the neglect of any precaution which may be required by the ordinary practice of seamen, or by the special circumstances of the case.

(b) In construing and complying with these Rules due regard shall be had to all dangers of navigation and collision and to any special circumstances, including the limitations of the vessels involved, which may make a departure from these Rules necessary to avoid immediate danger.

There is not much that I can add, other than if you are out on the water, then you need to know the rules. Even if it is a rowboat or jet ski. At least knowing the Rules will help you identify when others are not following them.

If you are looking for more information on the Law of Gross Tonnage, take a look at this summary by the US Coast Guard Auxiliary.

Update: Thanks to Instapundit for the link!

(Next time take ten seconds to find the relevant post of mine to leave your moonbat comments. I won't delete them if you can follow that simple rule.)

On reflagging the cruise ships as U.S. vessels....

.... isn't that prohibited under the Jones Act? The hulls would have had to have been laid in the U.S. to qualify, if I'm not mistaken.

All the more reason to revitalize a strong U.S. shipbuilding industry.

This is a late submission, as we just discovered this excellent carnival.

".... isn't that prohibited under the Jones Act? The hulls would have had to have been laid in the U.S. to qualify, if I'm not mistaken."

I need to investigate further, but I belive a deal was made permitting Foreign built cruise vessels to be in the US domestic trade if the Cruise lines agreed to replace them with US-built vessels. (Re: Hawaii cruise market.)

The Jones Act restrictions were eased for a while after Hurricane Katrina.

As for the vessels sailing out of Florida, they can reflag, but it's not so easy, and very expensive. For starters, the majority of the crew and staff would need to be replaced with Americans.

This will most likely be covered in a future edition!