There is lots of press going into this holiday weekend about how a couple of retired generals are calling for Rumsfeld to retire. Looking at his Wikipedia bio, you can already check out who is saying what, thanks to the quick editing by those who dislike him (missing are comments by generals supporting him.) Some of the generals are even claiming that he is intimidating.

Intimidating? Coming from a general? Are you kidding me? What kind of Generals are we talking about? Sounds like a child. We are apparently not talking about Patton-types.
Now let's take a look at the job of the Secretary of Defense:

Rumsfeld is in charge of the Military. He is the boss. Have you ever had an intimidating boss? Even if Rumsfeld is intimidating, it is not like he is dealing with children. He is dealing with US Army and Marine Corp Generals with years of experience in the military. These are people that know how to handle themselves in stressful and demanding situations. And we are supposed to believe that they are being intimidated by a man in his seventies?
President Bush has come out strongly in defense of Mr. Rumsfeld. Now lets take a look at another of the Secretary of Defence's duties:

The term National Command Authority (NCA) is used in United States military and government circles to refer to the ultimate lawful source of military orders. The term refers to the President of the United States and the Secretary of Defense.

Only the NCA can order the use of nuclear weapons, including the Single Integrated Operational Plan (SIOP). Neither individual, by himself, can order that strategic nuclear weapons be used against any country or region. If the NCA determines that a nuclear strike is necessary, they must jointly inform the Chairman of the Joint Chiefs of Staff, who in turn will direct a general officer on duty in the National Military Command Center (NMCC) at the Pentagon to execute the SIOP. - Wikipedia

So President Bush needs Mr. Rumsfeld to give the ok to nuke Iran. Perhaps that's why the President likes having him around, knowing that 'Rummy' will give the ok and then be sure that it's really done right.

That's sure to give the moonbats even more nightmares.

There is one other thing that bothers me in all of this. Rumsfeld has already offered his resignation to Bush twice, over a year ago. So those who think that Rumsfeld needs to go need to be real men and address their complaints to the President explaining why Rumsfeld should be fired. Rumsfeld has already done what you are asking him to do. His resignation has been sitting on the Preident's desk, for a while now. 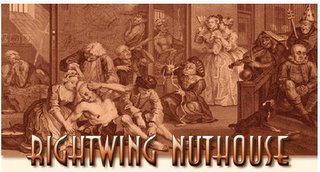 Be Sure to visit the Carnival of the Clueless!