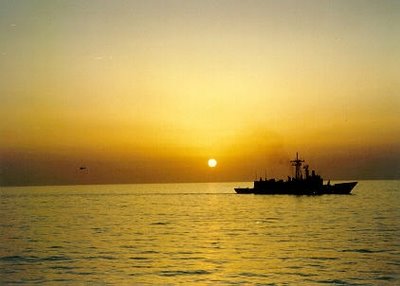 River of Fireflies writes in "i am! a man! of the sea!" about his search to find out how to get a job on a merchant ship.

The Yankee Sailor fills us in on "USS McCampbell Collides With Tanker in Gulf" (NOTE: Warships normally travel twice as fast and are constantly changing course.)

The Jawa Report comments on Iran's test of a Torpedo that travels faster than 200 miles/hour.

American Crusader comments about the ACLU filing a discrimination suit against the Coast Guard because it required a Muslim to remove his (religious) head cap for his license photo, which he refused. The Coast Guard has recently issued the license but the ACLU is going to sue anyway. Read the inaccurate ACLU press release here. (NOTE: Muslim Countries REQUIRE the removal of head coverings for photos, especially drivers licenses.)

Moon of Alabama in his post "TEU Monsters" has coverage and pictures of the COSCO GUANGZHOU, currently described as the world's 'biggest' container vessel.

The California Office has a post about "California's Offshore Oil Drilling Issues." I have heard a number of stories from friends working on the West (left) Coast on tankers about how idiotic California is in treating oil tankers and oil shipments in general.

An Anonymous contributor sent in the story of yet another hijacking off of Somalia. Eaglespeak has further info as well as a post pointing to the latest ONI (Office of Naval Intelligence) Worldwide Threats to Shipping Report. I get the report via email every week and it always contains a surprising amount of activity. Each report normally ends with a summary of what Greenpeace activists have been up to in the ports. (29 March report here.)

Secular Blasphemy reminds us of the anniversary of the Falklands War.

The International Labour Organization (ILO) has a Database on reported incidents of abandonment of seafarers here.

Cannoneer #4 submitted a number of items including the following:

A story in Spiegel about a research trip that managed to record record-breaking 'Monster waves' which they point out should not be confused with freak waves.

The US Navy intends to donate the Battleship USS WISCONSIN to the city of Norfolk, VA. I suspect that this donation will go better than the Navy's attempt to donate the USS IOWA to San Francisco. Gay Patriot has coverage of San Francisco's refusal to be host so such a historic vessel. One vessel that has managed to find a home in San Francisco is the SS JEREMIAH O'BRIAN. See a photo essay of that vessel here.

Cargo shippers have finally added their two cents about all of the proposed security legislation and how it will disrupt the flow of cargo. (Scanning each container will add about $125/container.) See my post here listing many of the bills submitted in both halves of Congress.

The Times UK has story covering the concerns of global businessmen in the wake of the failed DP World port deal.

Surprising to me, US Shipyards are full, and will be for at least in the near future.

Newsweek plans to intdroduce Containerization to it's readers in their 10-17 April issue.

Finally, I predicted the demise of a UN Convention concerning Seafarer Identification due to fallout over the DP World Dubai Port Deal.

Take a look at a map charting the recent positions of the vessels operated by Oldendorff Carriers. Click on a vessel to see the name and ccordinates.

Take a look at the view from the GRAND PRINCESS shipcam. From there you can select other Princess vessel shipcams. 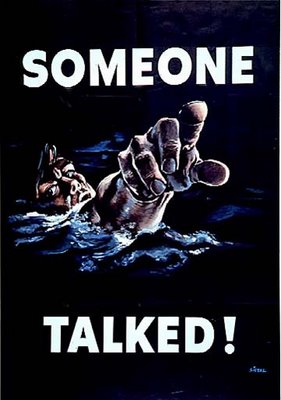