Most of America's offshore area is currently off limits to offshore oil drilling. It is simply not on the market. Everyone knows about ANWAR and that critics of ANWAR claim that drilling there will not make any difference. Well sure, not by itself, but there are many other areas that are currently off-limits to drilling. Now ANWAR is not offshore but on land in Northern Alaska which almost none of us will ever visit.

Take a look at this map. Currently, the US Government permits offshore oil exploration in the red areas: 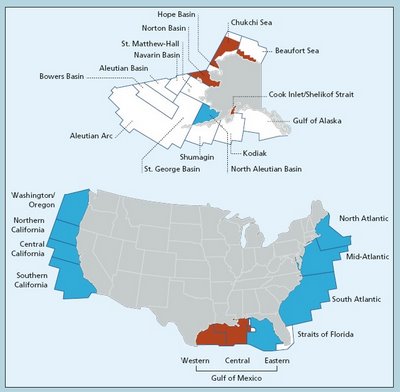 I thought the Government wanted to reduce foreign oil reliance? They sure have a funny way of going about it.

We have the following updates about politics and gas prices:

First, there is the Prince of Qatar:

Qatari Energy Minister Abdullah Bin Hamad Al Attiyah said the price of oil would drop by $15 should politicians end their expressions of concern over a halt in supplies.

Al Attiyah said the record oil prices of more than $75 per barrel was the result of fears and speculation within the market.

In other words, shut up.

Then there is the Washington Post which has a great articles about the cars taht our Congressmen and women drive:

"Since George Bush and Dick Cheney took over as president and vice president, gas prices have doubled!" charged Sen. Barbara Boxer (D-Calif.), standing at an Exxon station on Capitol Hill where regular unleaded hit $3.10. "They are too cozy with the oil industry."

She then hopped in a waiting Chrysler LHS (18 mpg) -- even though her Senate office was only a block away.

America may be addicted to oil, as President Bush puts it. But America is in the denial phase of this addiction -- as evidenced by the behavior of its lawmakers. They have proposed all kinds of solutions to high gas prices: taxes on oil companies, domestic oil drilling and releasing petroleum reserves. But they ignore the obvious: that Americans drive too much in too-big cars. - Washington Post

There is much more. Read about who is driving what in the rest of the story.

Rightwing Nuthouse has a dead-on parody of this whole idiotic situation.

Meantime, the Demons had a better idea (politically speaking, that is). If the Pibble party could pander to the people then the Demons could up the ante. “Let’s tax the excess profits on turnip juice,” they cried triumphantly. This had the advantage of playing to the ignorance of the people of Unis about how turnips are grown and refined while making them sound like they’re “doing something about the problem.”

Of course, all the scheming and planning by the Pibbles and the Demons did not produce one additional drop of turnip juice. So the price remained high. And the people? - RWNH

Read the whole thing. It's great!

Going a Short Way to Make a Point - Washington Post
Qatar: Price of oil would drop $15 if politicians shut up - World Tribune

I think that if you will reread your last two posts, you may have a clue WHY immigration debate has become such a hands-off issue for this adminstration. First, Pemex has grossly mishandled their assets in Mexico. There's graft and malfeasance and all of the general flotsam that you get when you do business in that country. It needs a major infrastructure and management overhaul and Mexico, for all of it's machismo posturing, hasn't got the people nor the ability nor the backbone to do what needs to be done. Let some Texas Wildcatters in there with the technology and a free rein, and you will have oil flowing up to the US in a matter of months, not years, months. Add ot that the continuing debate over international waters, with Texas and Mexico getting into each other's hair regularly. As a joint venture, this could bring a much closer, stable oil supply, lowering the price and making the middle East and Venezuela less important as vendors and help stabilize and grow the native Mexican markets so that their people don't have to become economic refugees. It's a win-win scenario unless the Environmentalist Terrorists get in the game and believe me they ARE watching this closely. As for US resources, I grew up in Odessa in the Permian Basin during the last oil boom and bust. I have always heard that the price of crude oil got so low in the 60"s that only a huge change would permit the reopening. I wonder what the price point is for exploration out there? The finals issue is that since the Movie/Environmental Commerical that stopped nuclear plants from being builts is what is holding us back from development. If we can't build nuclear, can't drill domestically and hydrogen is NOT the answer that everyone wants to believe (did you ever see the film of the Hinderberg?)then what the heck are we supposed to do? I like the idea from Honda of the car with it's on power generator that you can leave plugged in to power the home...but I bet that gets hushed up in a hurry too. Wow, what happened to do the greatest good for the greatest number?