Welcome to Maritime Monday. a weekly roundup of the professional Maritime and offshore oil industry with a little Navy and Coast Guard thrown in to keep things interesting.

This Weeks Photos:
Below is news about the SS UNITED STATES. So here are pictures from my visit to take a look at the vessel. We actually drove through Philly just to see this ship. 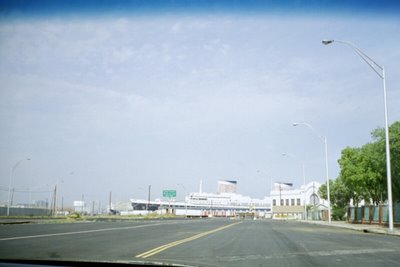 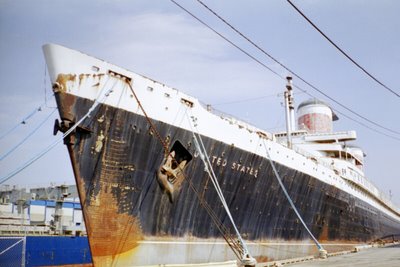 The Monitor has posted excerpts from the Egyptian ferry AL SALAM BOCCACCIO 98's 'black box'. As it pointed out, the passengers were never given word to go to abandon ship stations. 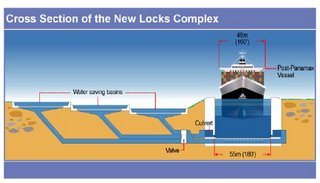 Sailors, Mariners & Warriors League has follow-up information on the American found floating on a couple oil drums between Denmark and Norway.

EagleSpeak has the story of a gasoline tanker kicked out of Port Canaveral, Florida. Normally, when the Coast Guard finds problems on a vessel it gets arrested and cannot sail until the problems are fixed. So to get kicked out of port is a real feat. Reading this brings back 'fond' memories of my time aboard a Mobil Oil gasoline tanker going between Texas and Florida. (At least we were safe!)

EagleSpeak also has news of the upcoming goodwill tour of the hospital ship USNS MERCY. The MERCY is one of two supertankers the Navy converted into hospital ships. Each ship has twelve operating rooms. Each operating room can handle two (separate) operations on the same patient as war wounded often suffer from multiple wounds. I was lucky enough to get a tour of this fine ship in 1995. (MERCY site here. Sister ship USNS COMFORT site here.)

Kinshasa on the Potomic has clear evidence (not that any is needed) that the Congressional outrage over the Dubai Port deal was nothing more than political pandering as another corporate purchase by a Dubai company is being ignored or explained away by the very same congressmen who were so concerned a couple of months back. While Congress has forgotten, the after effects are still rippling around the world.

The AFL-CIO weblog is expressing concerns that the background checks of those working in and needing access to ports will be unfairly targeted. The initial checks will not include a criminal background check. That will come later. The Government has yet to figure out how bad a criminal record you can have and still gain access to port facilities. Well the union has a suggestion in that area:

“We would like to have the checks limited to crimes that might have something to do with the possibility of you committing terrorism, not just any felony,” he says. Again, that’s why there needs to be an appeals process, Stallone says. “You shouldn’t lose your job for a youthful indiscretion.” He also warns that racism could enter the background-check process, since people of color are disproportionately convicted of felonies. - AFL-CIO

It will be fun to watch how this unfolds, as we are all about to learn just how many murders, robbers and other career criminals work in our ports.

Islam Online has the story of Amjad Hussain, who has been appointed Rear Admiral in the UK Navy. This is newsworthy because he is the first muslim to hold the position in the UK Navy. (Admiral Hussain is proof that it is possible to live and succeed in the UK as a muslim and be part of society. There are also numerous examples in the US too.)

The US NAVY has news that the decommissioned aircraft carrier ex-ORISKANY (CV/CVA 34) will become the largest ship intentionally sunk as an artificial reef in mid-May. It's destination is the bottom of the Gulf of Mexico.

UK – MAIB Safety Bulletin: The UK Marine Accident Investigation Branch (MAIB) issued a safety bulletin in connection with its investigation of the recent fire on the cruise ship STAR PRINCESS. The fire was on an external balcony and resulted in the death of one passenger due to smoke inhalation. Another 13 passengers were treated for the effects of smoke. The investigation continues, but areas for Improvement of the protection of external balconies have been identified. Among other things, operators of cruise ships are advised to: (1) provide increased vigilance to external balconies; (2) review crew training and response procedures; and (3) review advice provided to passengers and crew. These issues will be referred to the IMO on an expedited basis. Safety Bulletin 1/2006 (PDF) The US Coast Guard issued a Press Release stating its strong endorsement of the action taken by the MAIB and the cruise industry in this regard. (4/27/06).

The safety bulletin and the USCG statement point out the seriousness in the fire hazard that the external balconies present. I am surprised that it went undetected for so long. I know that there has been a long-time concern about the potential threat open internal spaces (the 'Main Street') in permitting fires to spread quickly inside cruise vessels, allowing fires to spread to multiple fire zones.

The following photos in the bulletin are a clear reminder of how serious this fire was: 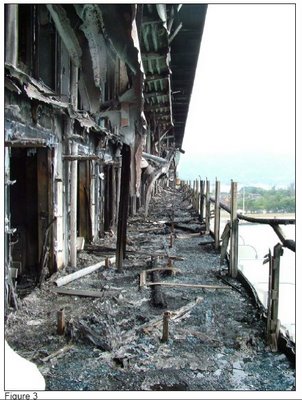 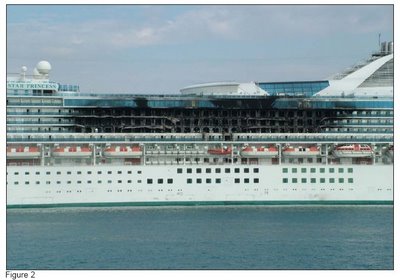 Finally, Spank That Donkey has an accurate guess of how today's media would have covered the Doolittle Raid on Tokyo during WWII. (Not exactly something they should be proud of!) The question I have is, how would the blogs have covered it?

Hollywood is doing a remake of the Poseidon Adventure.

Surely, this is the last thing that the cruise industry needs at the moment.

Also, an upcoming documentary will focus on the history of the SS UNITED STATES.

The website is here, and you can view a trailer on this page. They hope to have the film ready by December. I look forward to watching it.

Yo can also checkout the SS UNITED STATES Foundation and this Site.

Perhaps I should have included this vessel in last weeks great ship projects that have yet to see water. After all, there have been a couple of attempts to bring this ship back into service. My understanding is that it is currently owned by Norwegian Cruise Lines with the idea of renovating the vessel. I am not holding my breath.

Weekly Maritime Reference:
This week I would like to point out the historical website "American Merchant Marine at War"

Dedicated to the Mariners who died in service of their country during all Wars, including Revolutionary War, World War II, Korea, Vietnam; and their U.S. Naval Armed Guard shipmates

This site is a treasure-trove of information about the Merchant Marine's contribution during wartime. To get an idea of the danger of serving in the Merchant Marine during WWII, read the story of the tanker T. C. McCOBB and of the crews attempts to get back home once they were rescued.

The Sinking of the Esso Tanker T. C. McCobb

There is much more on ther site.