Welcome to this week's Maritime Monday.

This Weeks Photos:
Here are two photos I have taken of the ferry FINNJET. This was a couple of years back in the winter on the Helsinki-Tallinn route. The vessel is currently on charter as a college dorm for LSU at Baton Rouge. The school needed housing for students as a result of hurricane Katrina. You can read more about the ship here and here. If you are really interested in the vessel, you can purchase it as it is for sale. 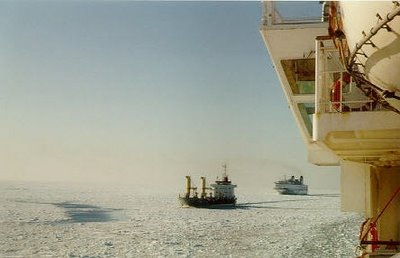 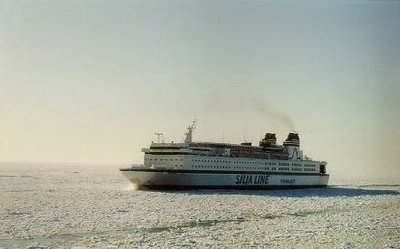 The Florida Sun-Sentinel has the story of Carnival Cruise Lines settling a lawsuit concerning unpaid overtime for a little over 6 million.

Findlaw has news that the Captain of the ZIM MEXICO III, Wolfgang Schroder, is being sued by the family of the victim in the crane collapse in Mobile, Alabama. The crane collapsed as a result of the ship striking it. The Captain has been arrested. (USCG photo of the accident scene)

Austin Bay summarizes the Iranian threat to shipping going through the Strait of Hormuz.

Consul-At-Arms has the story of a 20 foot boat found off Barbados by fishermen with 11 bodies in it. The theory is that the boat originated somewhere in Africa and drifted across the Atlantic.

The Marex Newsletter has an update on the ARAL WIND that was kicked out of port. It has now received permission to return, as it has corrected the safety issues.

The Monitor has news of the sinking of the ALEXANDROS T, a bulk carrier, off South Africa. The following link opens a PDF summary graphic page on the issue of "Improving the Safety of Bulk Carriers." 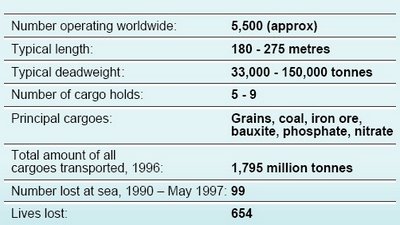 Cargolaw has more on this sinking and notes:

They were so close to safety -- all stepping onto life rafts -- 27 crew were taken away by this vessel. The end came in just one moment. There is no way to explain risks which the public can't understand. The movement of your baby carriages, stereo receivers, automobiles & frying pans -- is a very dangerous business. - Cargolaw

EagleSpeak has news of a fire onboard the Cruise ship CALYPSO in the English Channel.

Lloydslist has news of the flash fire on the VLCC SUVA that killed four workers. The fire was in an empty cargo tank (which apparently was not gas-free prior to doing welding.)

Impact of Technology on Working Environment has the story of a new floating port, the M/V GOAN PRIDE. "Floating ports are ships specially designed to load and unload cargoes."

The Heritage Foundation explains why 100% container cargo scanning is 'wasteful' and "would cost billions of dollars and drown authorities in useless information."

Sorry, no Navy or Coast Guard items this week. Doesn't mean that there was nothing noteworthy, just that I did not hear about it.

Perhaps someone can point me in the direction of an explanation about what happened to SEABED Mining? Years back this was on the cover of Popular Mechanics/Science and unlike stuff like flying cars, this seemed like a no-brainer. So why aren't we mining the seabed?

Everyone knows about containers and containerships. But what about LASH vessels?

Weekly Maritime Reference:
The subject of this week is Load Lines. In short:

A mark on a vessel’s side indicating the maximum depth to which it may be safely immersed when loaded with cargo. This depth is variable and depends on the waters of operation, time of year, and type of cargo; e.g. winter, North Atlantic, timber will have a special depth. Laws regulate the amount of cargo a vessel can carry and still maintain enough reserve buoyancy and a low enough center of gravity to ensure its safety in adverse weather and dangerous seas. - AMUSF

The circle is also known as the Plimsoll Mark.
Historical background leading to the adoption of the Load Lines convention - IMO

Great post. This is my first time here, but I'll be coming back, at least every Monday.

Thanks for the mention.

I've linked to you here: http://consul-at-arms.blogspot.com/2007/05/re-maritime-monday.html