This Weeks Photo:
The GLOMAR EXPLORER in Suisun Bay, California as part of the 'Ghost Fleet' in 1996. Unlike other vessels in the fleet, this vessel was moored by itself as special permission was required in order to board her. In 1997 she left the ghost fleet and was refitted as a drillship. 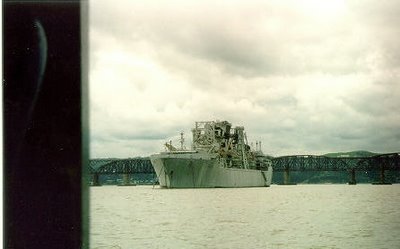 The Department of Homeland Security has released the proposed rule covering the issuance of the Transportation Worker Identification Credential (TWIC) card. It is in PDF format and 277 pages long. Here is an excerpt from page 58: (full document here.)

33 CFR 104.105
Coast Guard proposes amending § 104.105 to exempt foreign vessels from the TWIC requirements. Currently foreign vessels entering U.S. ports that carry a valid International Ship and Port Facility (ISPS) certificate are deemed to be in compliance with part 104, except for §§ 104.240, 104.255, 104.292, and 104.295. However, there are a small number of foreign vessels who are not required to comply with the International Convention for Safety of Life at Sea (SOLAS) or with the ISPS Code, and therefore must submit security plans in accordance with this part. Without the proposed language, these vessels would be required to comply with the TWIC provisions. The crew of these vessels would primarily consist of foreign mariners. While not explicitly exempt from the TWIC requirements by the language of 46 U.S.C. 70105, the particular situation of foreign mariners makes it impractical to issue this population TWICs, and it has been determined that it is inappropriate to this rulemaking. Thus, the small number of foreign vessels who would otherwise be required to comply with part 104, as well as all other foreign vessels, have been exempted from complying with the TWIC provisions of this part since none of their crew would hold a TWIC. Nothing in this proposed exemption should affect the existing requirements that owners or operators have procedures in place for allowing seafarers to traverse facilities for the purpose of completing crew changes or taking shore leave.

EagleSpeak has news of a shipbuilding boom in Vietnam, of all places.

The UK's Maritime and Coastguard Agency posted a press release concerning a 15,000 British Pound fine given to a racing sailboat captain for sailing the wrong way up a Traffic Separation scheme. Remember to follow the rules! Not following them can be extremely costly.

The Canadian Sentinel comments that Canada's mess of a submarine program should be blamed on the liberals in Government that bought the used subs from the UK.

The International Maritime Organization of the United Nations Has released the latest edition of IMO News Magazine. Unlike other IMO publications, this one is available at no charge on their website.

NIST (National Institute of Standards and Technology) has this graphic on the different types of offshore oil platforms. 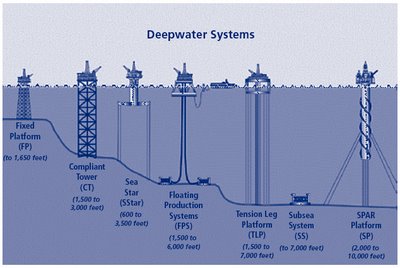 The article this appears in covers 'Risers':

The use of lighter-weight composite production risers (CPRs) will reduce platform weight together with floatation and tensioning requirements and overcome one of the greatest limiting factors in offshore oil production, that is, increasing riser loads that floating platforms have to support in increasing water depths. However, the cost of CPRs has been significantly higher than steel risers because prior manufacturing techniques have not been optimized and production levels have not achieved economies of scale. When CPR cost disadvantages are overcome, platform lifecycle costs will be reduced, and additional crude oil production from deepwater Gulf of Mexico petroleum reserves will be realized (Johnson 2000).

Since you cannot put the oil rig on the ocean floor, you have to bring the hole they are drilling up from the seabed to the rig. As a benefit, the start of your hole is nice clean (pre-drilled) pipe.

I mentioned Offshore wind farms in a previous issue. Turns out these farms might be closer than you think. Practical Environmentalist has the story of a Gulf of Mexico wind project expected off of Texas.

In YET ANOTHER example of how Louisiana is attempting to take advantage of the Hurricane Katrina disaster, Senator Mary Landrieu has decided to blackmail the Federal Government by placing a hold on Dirk Kempthorne's nomination as interior secretary. What does she want?

"The people of Louisiana have been providing America's energy since the 1940s and we are happy to continue, but we cannot do so under these unfair conditions," Landrieu said Wednesday. "We must receive our fair share of revenue so that we can fully protect America's wetlands and the national infrastructure they serve."

What does the Senator consider 'fair?' "half of offshore oil and gas royalties." Thanks to 43rd State Blues for the post. I guess they are getting tired of inventing pork projects to get the money. We are all concerned about hostile foreign Governments supplying our oil and gas, but what about hostile domestic Governments?

Maxed Out Mama also has coverage of the Louisiana offshore oil grab. This time by State Governor Kathleen Blanco. At issue is the demand to collect a portion of the Federal royalties on oil pumped out of the Gulf of Mexico further than 3 miles offshore. The State's boundary is 3 miles out. I am surprised to learn that they already do receive royalties from oil pumped further than three miles offshore.

The Monitor has coverage of angry passengers on Celebrity Cruises' SUMMIT. The vessel is having problems with it's POD propulsion. More coverage at the Seattle Times, which includes this quote:

According to one of the crew members, reached by a ship-to-shore line, many of the people on board were enjoying complimentary drinks Friday and did not seem concerned any longer about the missed port calls.

Lets hope they don't get too drunk that they can't remember the trip! Don't know what POD propulsion is? See the summary below.

I am a little confused. People pay to go on a cruise, and they are complaining/outraged that they are getting more time at sea? Some feel that they are being held hostage or that they are on a prison ship. I should feel sorry for them, but these problems are common in the shipping world. Just where do you think you are going on vacation?

The story above reminds me of a great quote from a Captain of a Crab boat on the show Deadliest Catch.

"It's like being in jail, with a chance of drowning."

Taking a cruise is nothing like going to sea on a cargo ship or fishing vessel, but you still are going to sea, on a ship.

Speaking of risks, Divester has the story of diver Timothy Hogan who is suing the Coast Guard because it took a couple of hours to come to his rescue for a dive accident. (The rescue chopper got lost.) I wonder how much the Coast Guard billed him for the rescue?

Divester also have this interesting question; Who buys private submarines? Short answer, Arabs in the Middle East. Why do I find this unsettling?

Chron.com has news that the first FPSO might be stationed in the Gulf of Mexico. Don't know what a FPSO is? Take a look here.

The Port of Helsinki has a webcam covering the South Harbor where the main passenger terminals are located. Keep in mind that there is a 7 hour time difference between Helsinki and the US East Coast. If you are looking at the right time, you will see a bunch of orange tents in the foreground where you can purchase some fresh fish and bread, or sit and have a good munkki (donut) and coffee.

Lloydslist has news (subscription) that Iran may already be suffering from it's saber rattling as it's shipping companies need billions to renew and expand their fleets and they may have a hard time finding funding outside Iran as long as they keep on their current nuclear path.

Be sure to check out this interactive webpage that lets you explore the different parts of a modern containership. Clicking on a part of the ship will bring up a photo(s) of the area. 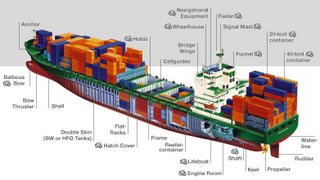 Weekly Maritime Reference:
The subject of this week is POD Propulsion. First atke a look at this PDF summary of traditional ship propulsion. Basically, they look like this.

In the diagram above, the rubber is missing.

In POD Propulsion, the propeller and the rudder are combined into one unit that can be rotated. This permits the propeller wash to be pointed in any direction instead of having the rudder direct the force. This eliminates the need for stern thrusters. Here is a photo of a Rolls-Royce Mermaid installation:

As you can see, a good portion of the machinery is now outside the hull reducing the space required in the Engine Room. As with any new technology, there have been some problems with this system, as was noted above.