Welcome to the National Maritime Day edition of Maritime Monday. 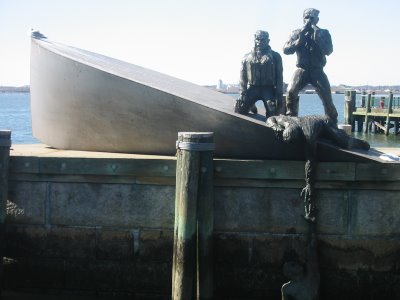 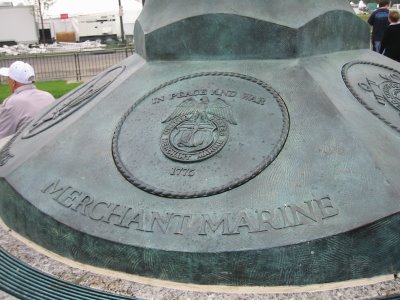 For starters, today, Monday the 22nd day of May, 2006 is National Maritime Day. The White House website has the President's Proclamation here. Eagle Speak has more details on the Merchant Marine during wartime. The US Maritime Administration has a "Short History on National Maritime Day" here. 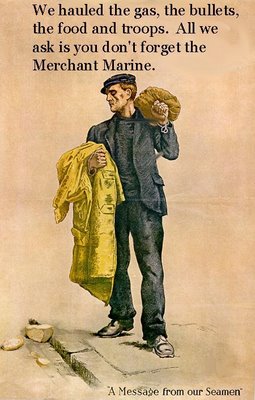 REUTERS has the story of the Captain of Celebrity Cruise's MERCURY who was removed from the vessel by the US Coast Guard in Seattle, Washington for failing an alcohol breath test. Check out Free Republic for reader comments on this story. See the USCG Press Release here.

The US Coast Guard has suspended its search for a passenger of the MARINER OF THE SEAS (Royal Caribbean) that is suspected of falling overboard. The Coast Guard was notified about 8 hours after he was reported missing by his friends. He is 'suspected' of falling overboard because they have video footage of him falling over the side around 2 a.m. according to Breitbart. It is unclear at what time the tape was reviewed, but taking into account that it took them 8 hours before reporting him missing to the Coast Guard, I suspect they did so at the time they reviewed that part of the security tape.

Eagle Speak also has an update on the man found adrift between Denmark and Norway. Turns out he was not an American after all. (However, he was damn lucky!)

The Navy Newsstand has the story of the decommissioned aircraft carrier ORISKANY sunk on 17 May to become an artificial reef off Florida. See Google photos here.

The Scandinavian Shipping Gazette has an editorial Titled "Wide World, Narrow Minds" providing an example of "what happens when conventional economic theory is applied to a complex business. " Especially, when it is one of your country's largest industries. (I remember hearing a lecture by a Finnish Economist explaining that the State subsidies that supported shipping should be done away with. I asked what was going to happen to those with industry specific skills. The reply was an annoying "the State will allocate funds to retrain them." More likely just pay unemployment.)

The Finnish Gambit has news of Royal Caribbean ordering a gigantic cruise ship from Aker Yards in Finland. How big you might ask:

"Taking a huge leap of 43 per cent in size from the new record breaking "Freedom of the Seas" to be delivered for Royal Caribbean from Aker Yards in April, the new giant of the cruise market will be 360 meters (1,181 feet) long, 47 meters wide, 65 m high above waterline and accommodate 5,400 passengers."

You can see a profile image of the planned "Project Genesis" vessel on the shipbuilder's site Aker Yards.

Sailors, Mariners & Warriors League has the story of a sailor dying after a brawl with another sailor at sea. What is news-worthy is that this didn't happen on any-old cargo vessel, but on Cunard Line's QUEEN MARY 2.

Senate hearing on TWIC program - On May 16, a hearing on the Transportation Worker Identification Credential (TWIC) program was conducted by the Senate Committee on Commerce, Science, and Transportation. Chairman Ted Stevens (R-AK) expressed concern that the program was significantly behind schedule. Deputy Secretary Michael Jackson, Department of Homeland Security, testified concerning the Coast Guard’s recent initiative on acceptable maritime credentials; proposed initiation of the TWIC process; and proposed changes to the merchant mariner credential. Mr. George P. Cummings, Port of Los Angeles, outlined elements considered critical to the TWIC program, including use of best available technology and reasonable costs to stakeholders. Ms. Lisa B. Himber, Maritime Exchange for the Delaware River and Bay, explained ways in which the TWIC process got off track and requirements to get it back on track. Mr. Larry L. Willis, AFL-CIO, expressed concern about the proposed disqualifying offenses, the waiver process, and the cost of obtaining a TWIC. (5/16/06).

Ms. Himber's testimony was the most eye-opening (The ALF-CIO's testimony was missing from the webcast.) as she notes that there were problems with the program and not all of them were explained to her. She also mentioned that the biometric aspect of the IDs was not tested in their experiment. I was surprised to learn that, although the way the program is set up, each port can decide which biometric they will use. So testing one will not be enough. The ALF-CIO's written statement is no shocker in that their main concern is that common criminals who present no terrorist threat will be denied TWIC credentials and by default lose their jobs.

Philly.com has the news that Unions are complaining that Aker Philadelphia Shipyard is using too much foreign material for Jones Act (see explanation below) tankers that they are constructing.

Is Maritime Monday too American or even too Finnish? Well, we are all victims of our own experiences. With that in mind, you are encouraged to submit maritime-related posts either by submitting via the submission instructions linked below or by posting a link to the story in the comments of this post.

Hapag Lloyd has a matching game on their site.

Weekly Maritime Reference:
The subject of this week is the United States Jones Act. It covers cabotage trade.

CABOTAGE 1. national shipping: trade, shipping, or navigation that takes place in coastal waters within the boundaries of a single country - MSN Encarta

In it's simplest form, to move any cargo (on the water) from one US port to another US port, the vessel must be:

- Built in the United States.
- Owned by a US entity. (a person or corporation)
- Crewed by Americans.

Of course most of the US can also be serviced by truck, rail and pipeline, but Hawaii, Alaska, Guam, and Puerto Rico are supplied mainly by ship, so any cargo originating in the US must travel on US-Flag Jones act vessels. Not all US flagged vessels can carry Jones Act cargo as they have been built overseas. Those vessels can carry cargo to and from the US and can travel between US ports as long as cargo loaded in one US port is not discharged in another.

The Jones Act is an Act of Congress, which governs the liability of vessel operators & marine employers for the work-related injury or death of an employee. It is a federal cause of action, meaning that the United States Congress intended for all seamen's injuries throughout the nation to be guided by the same liability standards. Although the Jones Act protects seamen, it is not the same as workers' compensation. It does not require payment regardless of fault. In order for a worker to recover under the Jones Act, a worker must prove some negligence or fault on the part of the vessel's owners, operators, officers, and/or fellow employees or by reason of any defect in the vessel, its gear, tackle, or equipment. The Jones Act provides an injured seaman a remedy against his or her employers for injuries arising from negligent acts of the employer or co-workers during the course of employment on a vessel. This means that the employer must do something unreasonable or fail to perform a reasonable act that would have prevented injury in order for the seaman to win his claim Claims brought under the Jones Act can also raise claims against a vessel's owner that a vessel was unseaworthy. - Cargolaw

The Jones act has it's supporters, most notably US Shipyards and American shipping companies. There are also it's detractors; US areas supplied mainly by Jones Act vessels, and American farmers.