I am completely confused with this verdict. The US has been pushing for China to float the Yuan. Now the Treasury Department finds no manipulation. How can that be?

The Treasury, which has repeatedly said it wants China to loosen its grip over the value of the yuan, chose yesterday to avoid a direct confrontation. While China hasn't made enough progress, it isn't deliberately seeking an unfair trade advantage with its currency policies, the Treasury said in its semiannual report on the practices of U.S. trade partners. - Bloomberg 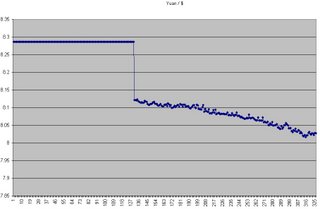 The drop in the rate was in July 2005 when China relaxed the exchange rate.

Preeg estimates that the value of the yuan, a denomination of the renminbi, is being deliberately held at 40 percent less than its fair market value against the dollar, giving Chinese goods a competitive advantage.

John Engler, the president of the National Association of Manufacturers, said the administration had missed a chance to drain support from the legislation targeting China.

``A citation for currency manipulation would have put China on notice that the U.S. government is serious about this,'' said Engler, whose Washington-based organization is the largest U.S. group lobbying on behalf of factory owners, in a statement. ``Economic history shows that severe currency misalignments, if not dealt with, could increase the dangers of protectionism.''

Yesterday's report covers the second half of 2005. Three weeks into that period, China ended a decade-old peg to the dollar, revalued the yuan by 2.1 percent against the dollar and said it would allow the currency to fluctuate by as much as 0.3 percent a day. The yuan has climbed 1.3 percent since. - Bloomberg 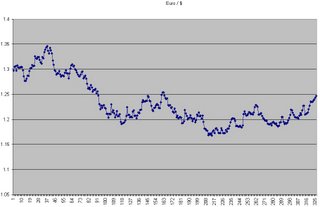 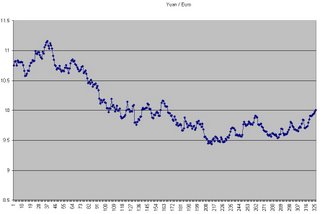 Can you see a link between the two last charts? It looks like the Yuan-Euro rate is directly linked to the Dollar-Euro rate. This might have serious consequences for Euro Countries, especially if the value of the Dollar drops and the Yuan follows it down. This would mean that Americans would still be able to afford cheap Chinese products, while at the same time, American-Made products would become cheaper t foreigners, increasing exports. That's great, because we will need the increased income to afford $5 a gallon gas as the price of oil will go through the roof.

Come to think of it, let the Chinese continue to fix the exchange rate. It only means that they will have to keep buying US Treasury notes.