So Fred Thompson has placed third in Iowa, which I think is pretty damn good for a person labeled 'lazy' by the press. For a lazy guy, he managed to tie with John McCain who has done anything but run a lazy campaign.
I think Fred should do better in the upcoming states simply because the winner of Iowa, Mike Huckabee, will not be able to play the 'God card' as effectively as he did in Iowa. It might even harm him if he gets pegged as a religious candidate, which I think he will if he has not already. (As apposed to him being harmed by his lousy record, which for some reason is not getting any press-play and won't until the general election, if he gets that far.)
The person who I think will benefit the most will be Fred Thompson. With that said, I answered Fred's funding plea with a second $25 donation, thus breaking my 'Never Donate to politicians' rule for the second time. Fred is looking for $540,000 by next Friday. So far he is off to a good start. Here is the total from 10:18 A.M., the time when I made my donation: 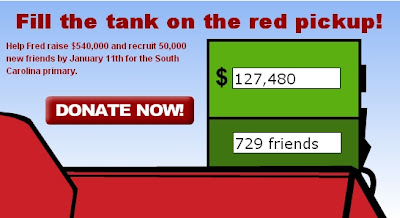 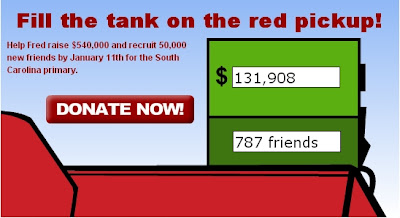 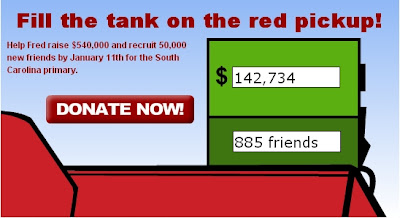 ($142,734 raised by 1318)
In three hours this morning, Fred received over $15,000 in donations from 156 people who gave an average $98 each. That's not bad for a Saturday afternoon and it is encouraging to me to see other 'small people' like myself supporting Fred. So go here and signup to become a Friend of Fred (to get on the email list) or click on the images above to go to his homepage where you can donate money, learn how to donate time, buy some swag, or simply become a 'friend', which Costs Nothing.
Previous:

as you can also see, i too am "lazy." why use capital letters and grammar etc when one can avoid it? personally i don't consider this lazy--i consider this reassigning my energies to where they are more needed. :)