I first submitted my resignation request in April of 2007. I received a confirmation a couple of months later that my discharge was 'in process'. Then about a month ago, I received a nasty-gram advising that I was not 'current' in the Reserve Program and either needed to (a.) Get back into good standing with the Navy, (b.) Resign or (c.) Do nothing and be transferred to the inactive reserves. The first choice was no longer an option for me as my continued participation in the program required a valid US Coast Guard License and mine had since expired. So I submitted a second resignation request and just received confirmation that I have been Honorably Discharged from the United States Navy. 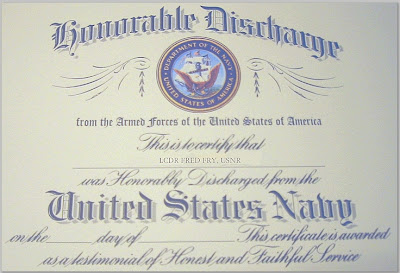 So ends a relatively short Navy career. I started my training in the summer of 1990 and was commissioned an Ensign in 1994. I think the most notable accomplishment of my Navy 'Career' was obtaining my STCW 95 training to allow me to upgrade my (STCW 78) Third Mate License. It might not sound like much, but it was for me. Oddly enough, I never served on a Navy ship. I did go 'overseas' to Panama to participate in a large training operation. That was very interesting and fun, especially considering that I was working with those who were running the operation. My last active duty assignment was in a 'Crisis Command Center' in Washington, DC during Operation Iraqi Freedom tracking ships and cargo around the globe.

As with everyone else, I have had my fair share of difficulties with Navy administration. It took the Navy two years before they realized that I was not in their main (DEERS) database. I was in Panama at the time attempting to get a new ID card, which they refused to issue because I was not in the system. Things got worse when my unit told them that I was not one of theirs. Eventually that got sorted out when the Chief requested that they check again as I was standing in front of him, with orders that they had issued. Then there was the task of getting a 'five-year physical'. It was at that time that I learned that I failed my commissioning physical.

I have been awarded no medals, not even 'National Defense' which as one friend told me, everyone gets. Yes they do, but someone has to award it to you when you qualify, which never happened in my case. I don't like the idea of having to chase people down to give me an 'award'. No matter. As long as I don't have aspirations to run for President, then it's not an issue.

Ever since I was a child I had wanted to be in the Navy. Strange enough it was having my own children that killed off any illusion I had of continuing as an active Reserve Officer. That's a shame as I always looked forward to going on active duty.

[Note: This is by no means a full summary of my involvement with and contributions to the Navy. So feel free NOT to pass judgement unless your another Merchant Marine Reservist. It's also good to keep in mind that opportunities were much fewer and far between both in the Navy and Merchant Marine in '94, when I got out of school.]

having met you i can honestly say you are an awesome person, worthy of much admiration. i just loved this: 'So feel free NOT to pass judgement unless your another Merchant Marine Reservist.' AMEN.

As a 24+ year vet, both active and reserve, Go Navy! Sorry some of it sucked for you sir. But, Merchant Marine is tough too. Had some friends go that route.

I'm right behind you as a Coast Guard reservist currently not in a drilling status. By March I either need to start drilling or retire. Always said I'd stay a reservist as long as they'd have me and as long as it was fun. I stopped drilling last March; first thing of note: I didn't miss it. The money, sure, but not the IDT itself.

On to bigger and better things, and you too.

And if you think Navy personnel can screw things up, the Coast Guard is just as bad. We may be smaller, but we suck at the personnel nitty gritty.

You know what you did or didn't do. I've come to believe that's really the only thing that matters.

Thanks much for the comments!

Ahhh, DEERS. It continues to amaze me that we sent men to the moon four decades ago but we still cannot get DEERS to figure out when individuals go from active to reserve and vice versa.

Instead of making the world safe for democracy, we should make the country safe from bureaucracy!!

You reminded me that I was never able to get the Navy to accept the fact that I got married in 2002. I tried to update my 'Page 2' and while it was update it contained the comment "NO PROOF OF MARRIAGE SUBMITTED". Of course I did submit proof, but since I was married overseas, they never bothered to read the paperwork that was issued from over there.

Nice certificate, suitable for framing. But did you get a DD-214 with accurate info entered on it, like you awards (National Defense medal) and your qualifications? If not your veteran status isn't clear and you may lose eligibility for VA benifit. Follow up and get familiar with the VA web page!!
USN 20yrs, Merchant Mariner 12 yrs