Did I miss something? Did I ignore your part of the world? Then feel free to add stories that I missed in the comments. Feel free to comment in general as well.

From our main offices in Bergen and Oslo, Norway, and our other locations in London, Houston and Perth, Wavefield Inseis has a global reach, with activities in the Americas, Europe, Africa, the Middle East and Asia.

Equipped for success
Wavefield Inseis ASA was founded by a number of the most experienced people in the geophysical industry in order to provide a high quality range of services aimed at increasing the exploration success of its clients and to assist them in maximising production from their existing reservoirs.

All of the founders of the company, and all key staff, have a common recent history and know the strengths that a dedicated, highly flexible and responsive team can bring to any project. Not only in conventional towed streamer surveys, but also with complex projects that involve feasibility studies, front-end engineering and bespoke equipment design and processes - projects such as permanent seismic array installation, deep water OBC surveys, and one-off shallow water and source vessel rigging.

Services
Our range of proprietary and non-exclusive Multi-client services includes long offset 2D, high capacity 3D, 4D, Multi-azimuth and Wide-azimuth data acquired with highly specified vessels and the latest seismic equipment. We are also a full service permanent 4D acquisition provider and will, through a number of strategic alliances, bring new technologies to market to further accelerate and de-risk the replenishment of our clients' reserves. - Website 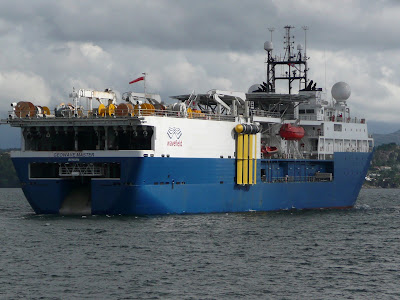 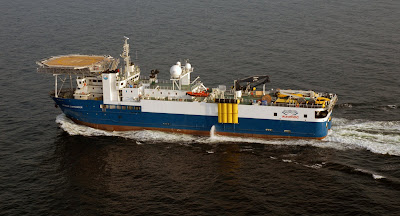 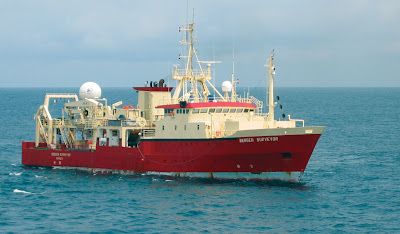 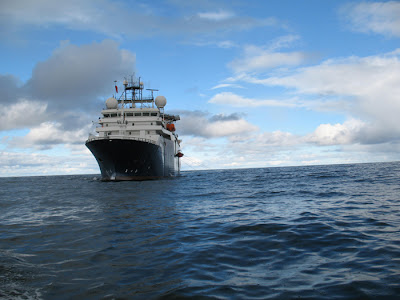 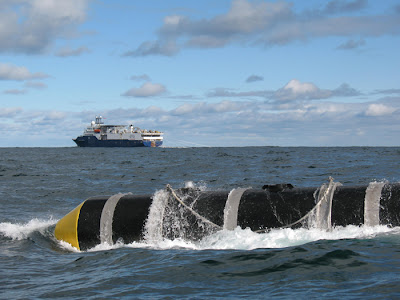 You can view the fleet here.

You can also see photos of the inside of the GEOWAVE MASTER taken by 'Colin' and posted to Picasa here including this one of the server space: 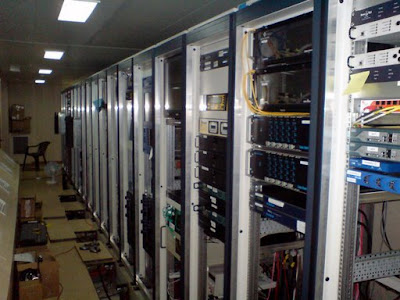 You could say that the data collected is the cargo.

I receive an Honorable Discharge from the US Navy.

Eagle Speak has "Capturing real live pirates and how they whine" covering the capture of two Sea Shepherd pirates by a Japanese whaling vessel. (Eagle Speak promises to publish his weekly series Sunday Ship History later today, so check out his homepage for updates. You should be doing that anyway, since he covers maritime issues all week long.)

Seems that I am not the only one to notice that shipping has been taking a real beating so far this year. Robin Storm posts about it in "January 2008 A Interesting Start to the Maritime New Year!"

Chaotic Synaptic Activity has for his weekly series Monday Maritime Matters the WWII contributions of the Manitowoc Shipbuilding Company located on the Great Lakes, covering the problems they faced from building submarines with no previous experience to the long journey to get them to the open sea once completed.

gCaptain has the amazing post "Windoc Incident - Story Behind YouTube’s Most Chilling Video". You saw the video, now get the story.

gCaptain also has the news of a contest to name Royal Caribbean's first Genesis-Class cruiseship, which when launched will by far be the world's largest.

Tugster has no less than five posts full of photos covering the PEKING Drydocking. He even managed to get aboard during the return voyage to South Street Seaport. So go to his homepage and scroll through the related posts.

Sea * Fever has more on the PEKING in "The return of the (Pe)King". He also has posted the 'second part of Irving Johnson’s amazing video Round the Horn on Peking'. The first part he posted here. This is a video of extremes. Not only is there some truly classic crazy sailing footage, but it also seems to draw out the extremes in men and women. The men who really enjoy watching it and the women who see it as boring.

The Horse's Mouth has photos of the ICE PRINCE sinking in a post titled "See You Later Alligator." The crew managed to safely abandon ship well before she went down.

SAILORS, MARINERS & WARRIORS LEAGUE has this week's must read for anyone who either wants to attempt a solo Atlantic crossing or anyone who doesn't think that boat insurance is important in "Sailor Sends Mayday To His Local Bar". Actually, just go and read it. This story has a little something for everyone, especially if you think your having a bad day. It is Monday, isn't it?

The Jones Act is simply a huge can of worms. It spans the full spectrum of manning, building, registration and a host of other variables. Thanks, in part, to the U.S. Maritime Administration, we are on the cusp of placing U.S. maritime cadets on board foreign-flag tonnage in a planned -- and substantial -- fashion, which hopefully will eventually follow with the wholesale manning of foreign-flag tonnage with U.S. professionals. This type of promising development, opening up worldwide opportunities for U.S. mariners, also opens up another Pandora’s box. I’m not aware, as of yet, that anyone has fully looked at the implications of U.S. nationals on foreign ships, and what their "Jones Act" rights might be under these conditions, down the road.

Cargo Law has a photo collection of the reefer container stack disaster on the JEPPESON MAERSK.

It is estimated that on average a container ship emits around 40 times less CO2 than a large freight aircraft and over three times less than a heavy truck. Container shipping is also estimated to be two and a half times more energy efficient than rail and 7 times more so than road. - CSIS 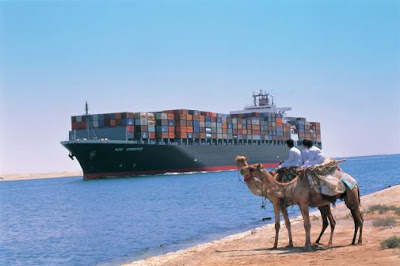 The BBC looks back at the MSC NAPOLI grounding with an update on the looting and looters.

Marine Buzz has "Sea Launch Successfully Launches Thuraya 3 Satellite" including video of the launch and "Australian Kayakers Successfully Paddled across the Tasman Sea". It took them 62 days.

Auto Unleashed has "370 BMWs damaged in cargo ship incident". The story includes photos of the victims: 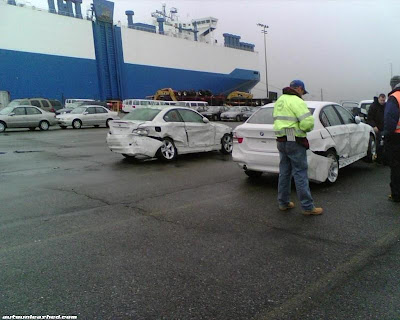 AutoBlog names the ship as the M/V COURAGE. The damage was due to the ship 'tipping'. No mention of the cause, but surely it is stability-related. No mention of any injuries which is somewhat amazing considering that the accident most likely happened after the longshoremen removed the lashing straps and before they were discharged.

The US Navy appears to not be the only ones having problems with their shipbuilding Program. EndofEmpire - The Independent Eye has problems for Russian Navy Shipbuilding.

A couple of the pleasure sailor bloggers (and the like) have been running an ongoing theme of 'Fish on Fridays'. Never Sea Land has decided to put all the other sites to shame with a gallery of over 200 photos. Seems to be safe for work. Then again, that assumes that the people in charge are rational and that your not sitting there for an hour checking out the photos. If you are confronted with charges that you were looking at NSFW content, just point out they are the ones who are very sick for even thinking that.

Nepunus Lex covers the attempt to rid the US Naval Academy of one of some tradition involving plebes climbing the 'Herndon Monument' in an attempt to make the Academy safer and more P.C.

Gizmodo has images and story of "NYC Installing Gigantic 120-Foot Waterfalls Under the Brooklyn Bridge, in the East River"

Freaque Waves has "Aloha, Huge waves roar!". Those rough seas have resulted in a number of canceled sailings for the Hawaii Superferry.

Mad Mariner covers "Boating at Night Brings Intensifies the Dangers and Challenges. Preparation is the Key."

CDR Salamander is searching for an UNCLASIFIED Powerpoint on the National Security Frigate authored and being passed around by Northrop Grumman. So go and help him out if you have a copy.

The Private Islands Blog has "The King of Mann".

In a real-life reprisal of the circumstances of the movie, and American discovered he was heir to the long dormant title of "King of Mann". This is the title of the former monarchs of the Isle of Man, a British possession in the Irish Sea. - Link to the rest of the story

I included this photo found on Never Sea Land for the enjoyment of you electrical engineers out there: 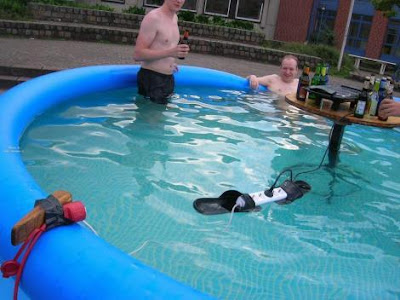 The plugs look Finnish. But the beer bottles suggest some other location in Europe.

Canada – longshore workers must apply for security clearances - The Federal Court of Appeal of Canada issued an order denying a motion by a longshore workers’ union for a stay from the regulation requiring maritime workers in Canada to apply for security clearances. The court ruled that, for a stay to be granted, applicants must show: (1) that there is a serious question to be tried; (2) that irreparable harm will be suffered by the applicants if the stay is not granted; and (3) that the balance of inconvenience favors granting of a stay. The court found that this was a serious question, but that any harm that might be suffered was not irreparable and that the important public interests involved outweighed any inconvenience to the applicants. The application for a stay from the requirement of these workers to apply for a security clearance under the Marine Transportation Security Clearance Program (MTSCP) was denied. Note: this Canadian program is similar to the US Transportation Worker Identification Credential (TWIC) program. International Longshore and Warehouse Union, Local 517 v. The Attorney General of Canada, 2008 FCA 3 (1/7/08). - Dennis Bryant Holland & Knight homepage (Used with Permission)

Operators turn backs on Nigeria - ONNE 15 January – AP Møller-Maersk is stopping all its ship calls to Onne, south of Port Harcourt, because of the continued violence and insecurity in the region, while French operator Bourbon has halted all activity in the Bonny River area for similar reasons. Maersk, which runs supply vessels and container ships into Onne, was quoted by Reuters yesterday as saying that no Maersk ship will visit the port until security is “demonstrably re-established”. Bourbon’s fast support and invervention vessel Bourbon Leda, under charter to Shell, was among a convoy attacked on the Bonny River by gunmen on 9 January, and two of its crew injured. The company says on its website that it has put upgraded security procedures in place and, along with other (un-named) oil operators, has “decided to suspend all activity in this area until further notice”. In Port Harcourt last night, a policeman was killed and two others seriously injured after escorting a Nigerian Ports Authority official home. Unknown persons tossed an explosive into the police car, press agencies report. Elsewhere in Rivers State, another offshore supply vessel was attacked by suspected militants yesterday, according to Afriquenligne. No further details were reported. - Fairplay Homepage (Used with Permission)

Who the fuck are U?

What a strange question from someone who is posting as anonymous. (With IP address 62.97.226.230 and sitting in Norway.)