We Provide 100% finance for shipping, aircraft or real estate projects.

Our business partners benefit from our limited partnership financing model which we, as an expe-rienced financial services provider, have been successfully utilising for the past 31 years. The ad-vantage for our business partners is the cost-efficient and fast procurement of the entire capital needed to finance their shipping, real estate or aircraft projects without placing a burden on their own liquidity, which can therefore be used for other corporate purposes.

A further advantage of this financing model is that we provide access to virtually unlimited equity capital. For instance, in 2006 alone, equity capital amounting to approx. € 9.3 billion was raised in Germany in the diverse sectors. Moreover we are able to respond rapidly and flexibly to individual financing requirements or needs. We achieve this by being reliable, by assuming risks on behalf of our business partners and by offering customised financing solutions based on our expertise and many years of experience. For example, we can align fixed charter rates with selected timelines and provide finance as off-balance-sheet financing without the restrictions usually imposed by banks.

They do this by managing closed-end funds as you can read here. So, if you have some cash to put aside, you can buy a piece of a new shipbuilding. 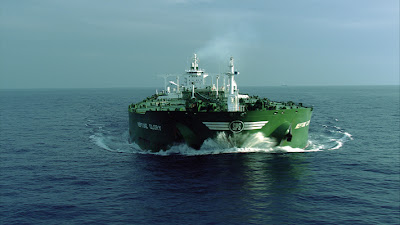 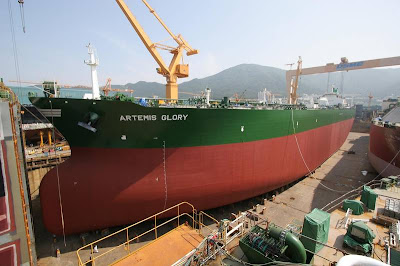 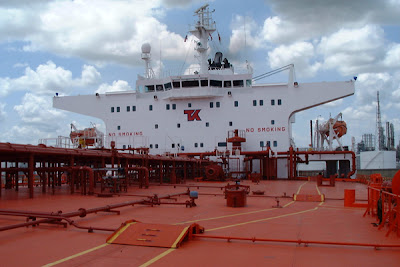 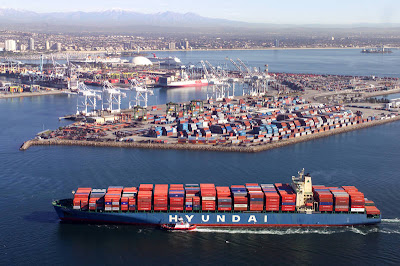 You can find more photos at their photo gallery here.

Also be sure to check outlast week's edition of Eagle Speak's weekly series "Sunday Ship History*: Skyhooked". This week's edition does not appear to be up yet.

Chaotic Synaptic Activity has for his weekly series Monday Maritime Matters which covers "the story of LTjg Fogg and his floating legacy."

Lloyd's List Newsroom Blog has "The Perils of Just in Time"

BBC News has photos and video of washed up timber cargo from the ICE PRINCE that sank last week. 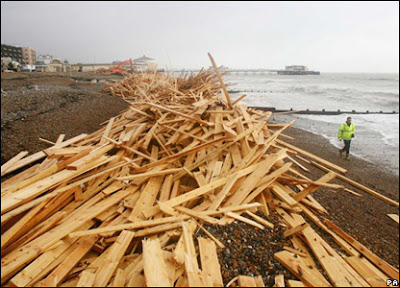 Malta Media has news that cargo bound for Greece might be discharged in Malta due to Greek port closures as a result of a strike.

When the chemical tanker Bow Mariner exploded off the coast of Virginia,USA, on February 28, 2004, 21 of its crew of 27 died. It was a tragedy born of incompetence,ignorance, intolerance and fraud. Many of the crew died because a vital piece of life preserving equipment was considered unnecessary and none had training in cold water survival.

The Astute Bloggers has the UN's admission that the estimate by their Global Warming panel that sea levels will rise 20 feet due to melting ice sheets is a huge error and that the real estimate is more like 2.5 inches. Go read the post which documents that the 'error' was most likely a deliberate fraud.

The US Coast Guard has a summary of enhanced LORAN, eLORAN. LORAN live on.

Robin Storm has "Waterspouts and Ships!"

The Financial Times puts a reporter on the containership APL PEARL for an 11 day voyage from Asia to Europe. The story includes a photo slide show. (Click the photo to see more) 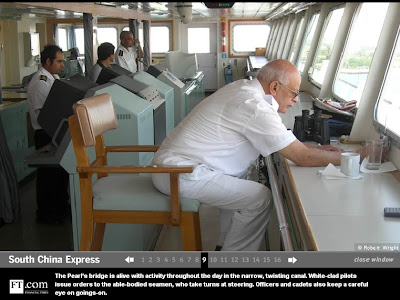 Tims Times has a photo of a lifeboat drill where the crew raised the lifeboat's mainsail. The last ship I was on had sheath-screw davits and not gravity davits, but even that lifeboat had an engine. Depending on your situation, you might wish for a sail, such as when you run out of diesel. But then you need an open boat for sail. It is all about tradeoffs.

BitterEnd has "Exxon Valdez Appeal to be heard Feb 27, 2007" and points out the catch-all rule.

Mental floss has "7 Super-Sized (And Somewhat Insane) Soviet Projects" three of which are maritime-related:

Marine Link has an update on the NEW FLAME salvage operations.

The Sydney Morning Herald visits a fish market in Tokyo and notes that 'Japan eats 30 per cent of the world's fresh fish' and wonders how long the global fish supply can sustain that type of consumption.

World Resources Institute has "Immigration Linked to Degraded Ecosystem". Illegal immigration that is.

According to the Times article, fish populations in Senegal and from other parts of the region were once abundant enough to support livelihoods. But now, families find they are barely scraping by. Major fish stocks are dwindling because of fishing by local boats as well as international fleets, including from the European Union, China, and Russia. This crash in natural resources is encouraging northwest African nationals to attempt migration to more abundant societies. In 2007, about 31,000 Africans attempted to flee to the Canary Islands, which serve as a gateway to Europe. Of these, 6,000 disappeared or died.

And what is the European Union going to do about it? Blame the US maybe?

Well, Conservatives in the European Parliament are pointing the finger when it comes to the fisheries mess in "50th birthday of 'disastrous' Common Fisheries Policy"

Fisheries Spokesman for the Conservatives in the European Parliament, Struan Stevenson MEP, labelled the policy "disastrous", as he and colleagues continue their campaign to end the disgraceful by-catch and discards problem, which is a key consequence of the TAC (Total Allowable Catch) restrictions and quotas regime of the CFP. Up to a million tonnes of healthy fish - simply undersized, immature or out of quota - are thrown dead over the side of fishing boats in European waters every year.

Maybe they can solve the by-catch discards problem by selling it all to the Japanese.

The Jawa Report has lots of video "Teh Brutal: U.S. Navy SEAL Training". They have the whole series posted. If you haven't seen it, you should, if your interested in how they build SEALS.

The Sydney Morning Herald also has the seizure of the Australian Customs enforcement vessel TRITON by some members of the civilian crew as part of a wage dispute.

Cruise Bruise has "Passengers Angered By Deliberate Path Into Cyclone - P & O Cruises Pacific Star - January 20, 2008" Maybe P&O is targeting the wrong passengers. They need the ones who complain when port calls are canceled due to bad weather.

Shipping Times (UK) has "Unions discuss FOC shipping with Irish ministers - ITF presses for collaboration over access to vessels..." noting that 'the number of seafarers who disappear without a trace – some 1,500 annually.'

Life at Sea has "The Deep Blue Monsters"

UK – MSC NAPOLI update - The UK Maritime and Coastguard Agency (MCA) issued a press notice stating that the accommodation block on the stern of the wreck of the MSC NAPOLI has been removed. The only remaining major part of the wreck is the underlying stern section, which is listing 30 degrees to starboard. Discussions are underway to decide the timetable and method for its removal, which is expected to commence in April. In the meantime, a 500 meter total exclusion zone remains in effect. (1/18/08). - Dennis Bryant Holland & Knight homepage (Used with Permission)

DOT – wounded warriors to serve at USMMA - The Department of Transportation issued a news release stating that the US Merchant Marine Academy (USMMA) at Kings Point, New York will be opened to US Navy and Marine Corps veterans recovering from combat injuries. Participating veterans will be eligible for light duty assignments such as classroom instruction and mentoring. (1/24/08). - Dennis Bryant Holland & Knight homepage (Used with Permission)

Flu outbreak leaves chickens at sea - QATAR 22 January – Hundreds of thousands of dollars’ worth of chicken and poultry products are stranded on ships in the Arabian Sea after a bird flu outbreak, according to local reports. Qatar in the Persian Gulf and Oman on the Arabian Sea have banned Indian poultry imports after the incidence of avian flu in West Bengal, according to Middle Eastern media. The two states' ports have now denied entry to ships in transit with poultry product cargoes such as eggs. The MidEast states are primary importers of Indian poultry products and imposed the ban on the advice of veterinary experts. Poultry products from Iran have also been banned, although no reason has been given. Commodity Online says that about 4% of India's daily egg production – about six million eggs a day – are exported to the Middle East and Africa. Alternative export destinations are being sought in Kyrgyzstan, Albania, Afghanistan, South Africa, Sierra Leone and Angola. - Fairplay Homepage (Used with Permission)

Previous Editions:
Here or click on the label below 'MaritimeMonday'.
.
Posted by Fred Fry at Monday, January 28, 2008