This Weeks Photos:
This weeks photos comes from the shipyard of Lloyd Werft in Germany. This is a series of photos covering the lengthening of the refrigerated cargo ship CALA PALMA. 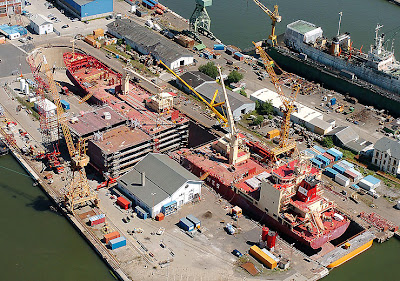 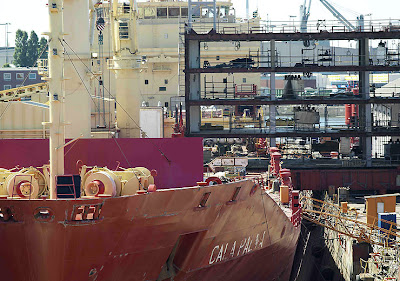 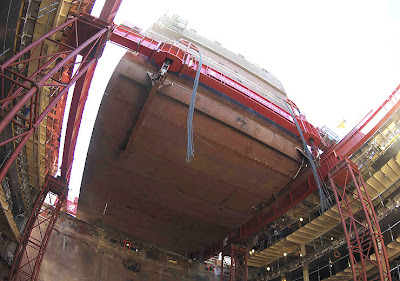 A Very Impressive move but not even newsworthy these days 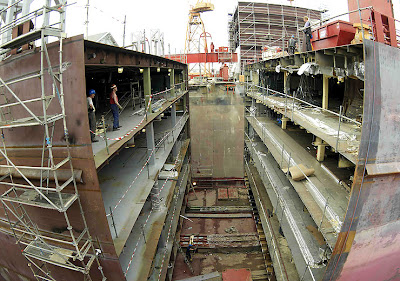 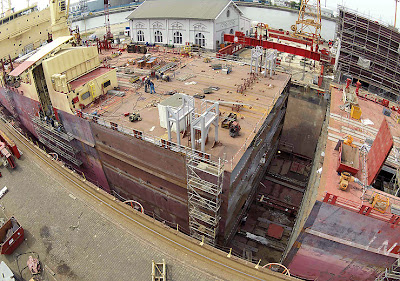 Hopefully, all the pieces line up

How's that for recycling? Surely it's good for the environment too as for about the same emissions, you now can carry much more cargo. It's almost like getting a new ship, without the wait.

The photos were found here.

Eagle Speak has "Container security = Pot bust". Just because your cargo isn't going to the US, doesn't mean that Customs won't want to look at it. Unfortunately for the shipping companies, that can mean lots of restows (moving containers not destined for that port) to dig out the box they are interested in out for examination.

Chaotic Synaptic Activity has his weekly series Monday Maritime Matters which last week documented the story of Medal of Honor recipient LCDR Jackson Pharris, USN who survived the attack on Pearl Harbor to continue to serve in the Navy and be injured again. Even his medal has story attached to it.

gCaptain has photos and story of LNG DREAM TANKER, the most colorful tanker in the world, thanks to children in Japan who designed the images.

The December, 2007 Edition of MarineLog is online: 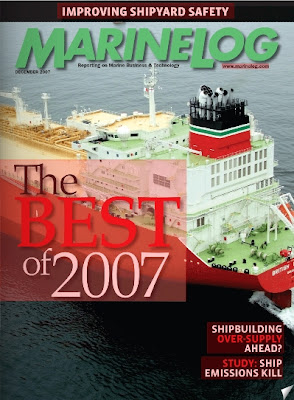 (Click the image to open the magazine)
As it says on the cover, this issue contains their list of notable ships for 2007.

Back in Maritime Monday 68, I included this:

BarcePundit has news that ocean levels are not raising as global warmists proclaim. Be sure to click through to the interview with the world's leading sea-level scientist for an explanation why sea levels appear to be rising in certain areas and why there is the bias to blame global warming. (How much do all these new ships being launched contribute to a rise in sea levels?) - Maritime Monday 68

Now Barcepundit points to a story in the Telegraph (UK) indicating that perhaps this claim is finally getting some traction: "IPCC Falsifies Sea Level Data" (As found here on Barcepundit)

Go read the original story for explanations including one case of using data from a location known to be sinking into the sea, so of course the high-time mark keeps edging up the island. It is called fraud and it is a UN body that it trying to pass it off as fact.

The Devil's Kitchen also notes that despite news to the contrary, there is actually more sea ice on the planet than normal. Why? Because it was freezing faster in the Antarctic than it was melting in the Arctic. (Not for anything, but if the ocean become less salty due to melting glaciers, wouldn't that result in more sea ice as the freezing point of sea water is lowered due to reduced salinity?)

Wikipedia has a list of 'Maritime Incidents' that happened in 2007. (It is by no means a complete list, but a good start.)

Want to earn more than $100,000 for six months’ work each year? The catch? Going to sea as an officer aboard oil tankers, supply ships and cargo vessels — at home or abroad. You’ve also got to spend three years in school and a little time working your way up the merchant marine ladder. - Telegraph

Nobody is going to give you a high-paying salary without some sort of effort on your part. The nice thing about shipping is that you can rise to these sorts of salary levels for what you don't do. For 'deckies' that means - Don't run aground, Don't fall asleep. Don't piss off the Captain, Don't spill, Don't hit anything...

Star Bulletin covers the all-female deck officer crew of the MATSON NAVIGATOR as it arrived in Hawaii. No mention of who (or what gender) the Third Officer was.

Bitter End provides a sad tale of what appears to be a case of claimed salvage turned to greed.

Tims Times covers the grounding of the containership LT CORTESIA in the English Channel.

The Monitor covers recent serious problems with the BC Ferries MV NORTHERN ADVENTURE that resulted in a dead ship and stranded passengers.

Messing About in Ships now has five podcasts posted for your listening pleasure.

Opinion Journal has "Why We're in the Gulf - The world would be a much more dangerous place without America as a policeman."

While U.S. import needs are projected to grow significantly, U.S. dependence on Persian Gulf energy is not, thanks largely to expected production increases in the Western Hemisphere and sub-Saharan Africa. U.S. energy imports from the Persian Gulf are expected to remain below 20% of total consumption. The oil market, of course, is global, and if something were to happen to the Middle Eastern supplies, prices would rise world-wide, and the U.S. economy would be seriously disrupted. But domestic supply is not the key to American interest in the Gulf.

Go read to see what is.

MarEx Newsletter has a list of global oil transport chokepoints.

Vista Pinas has a summary on the "Philippine Merchant Marine Academy"

Lower Hudson Online covers a collision between a car and a Metro North passenger train in New York, which the driver blamed on his GPS for instructing him to turn onto the tracks. Amazingly, he lived.

Hellenic Shipping News has "Iran is building 28 oil tankers" in Iran of all places.

ma'ona, living in Hawaii, is in the middle of trying to go a week living off of only food produced in the State, after discovering that over 90% of all food there is imported leaving the state with just a week's worth of food at any moment. Click on his links for a day-by-day rundown of the challenges he is facing. This is a great read for anyone who wholly believes the 'think globally, act locally' meme. Because at its simplest level, it makes no sense to try and do everything in every place. (Yet I constantly check where every item I look at in a store comes from, hoping that it is made in the US.) Maybe there needs to be a new thinking for the betterment of the planet; namely, Global is Local.

SAILORS, MARINERS & WARRIORS LEAGUE has the interesting shipwreck story in "Lost Boat Crew Rescued After 3 Months". It is a big planet and there is no guarantee that help will be near, or even know that you're in trouble.

Maritime Accident Casebook has "Article/Program Of Note: The Ship Whispers"

Shirlaw News Group covers accuracy problems with charts for Arctic waters, some of which have not been updated for over a century.

Piglipstick notes the second interdiction within a month of a cocaine-carrying sub off Columbia.

Environmental Graffiti covers Norway's problem in switching to powering its offshore Oil industry with 'greener' power from ashore in an attempt to reduce the country's carbon footprint. (What, no wind or wave power?)


You Tube has a video covering the problems of the US Merchant Marine just after WWII by looking back at the problems faced after WWI.

NASA – NAOMS information release - The National Aeronautics and Space Administration (NASA) released raw data from its National Aviation Operational Monitoring Service (NAOMS) survey. The survey of pilots and others in the aviation industry was conducted on an anonymous basis to learn of near-misses and other safety incidents (including equipment failures, unruly passengers, and trouble communicating with the tower). The survey revealed that safety incidents in the aviation sector occur much more frequently than had been assumed. NASA initially tried to withhold the survey results. When that failed, it made this release of raw data, which is almost unusable. Subsequent reports are to be made available analyzing the data. Why, you may ask, is an aviation safety study included in this maritime newsletter? The answer is that the aviation sector and its regulators are significantly more focused on safety than are the maritime sector and its regulators. When there is an aviation casualty, the search starts for the cause and how to prevent a recurrence. When there is a maritime casualty, the search often starts for someone to blame and possibly prosecute. The aviation sector has had a no-blame near-miss reporting system for decades. The US Department of Justice has consistently blocked efforts to establish a similar system for the maritime sector. Now is a good time to re-examine this issue and focus on fixing the system, rather than finding a scapegoat for preventable (but unprevented) maritime casualties. (12/31/07). - Dennis Bryant Holland & Knight homepage (Used with Permission)

Two Koreas discuss yard tie-ups - SEOUL 02 January – Shipbuilding co-operation between North and South Korea is set to take off this quarter with a survey of possible sites for setting up facilities in the North. At a meeting last week the two sides have identified Anbyeon in the east and Nampo in the west as possible sites for block-making factories. Modernisation of the North’s Youngnam ship repair yard with capital and technology being sourced from the South is also under consideration. South Korean yard majors Hyundai Heavy, Daewoo and Samsung are keen to invest in the North where costs are said to be significantly lower. Meanwhile, Hyundai Heavy Industries, which has also chalked out a massive yard expansion plan at home, has targeted more orders and higher turnover from completions in 2008. HHI is aiming for a turnover of W18 trillion ($19bn) against W15 trillion in 2007 when total orders clinched were worth $27Bn. It began the New Year with the delivery of a 10,000teu ship to China’s Cosco. - Fairplay Homepage (Used with Permission)

Previous Editions:
Here or click on the label below 'MaritimeMonday'.
.
Posted by Fred Fry at Monday, January 07, 2008

Thanks for the reference, Fred Fry!

Thanks and the same to you!