This Weeks Photos:
Here are some photos of the fleet of Ethiopian Shipping Lines S.C.:

Ethiopian Shipping Lines S.C. is the only company involved in sea freight activity in the country. The company, in its long sea transportation service manage to build a reputation of reliability, efficiency and good service. It gives a liner service in North Continent and Mediterranean route, Far East route, Arabian Gulf route and Indian Sub Continent route. It also gives a Cross Trade service mostly from Europe to Red sea and Gulf ports. - Link 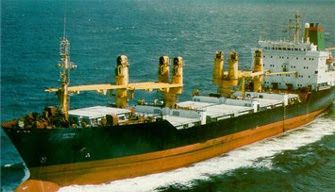 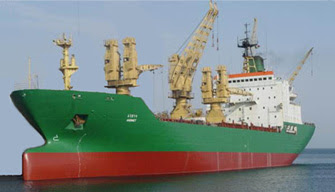 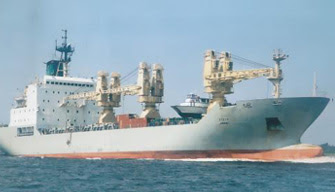 More of their ships can be viewed here.

Eagle Speak takes on the conspiracy theorists who are shouting 'Gulf of Tonkin' over the US Navy's encounter with the Iranians in "What is your course and speed?". I have to say that I have been laughing for days already over allegations that this was some sort of setup by the US Government to goad Iran into a war with the US. First, if that is so, then why did they fail to set the plan in motion by sinking one of the Iranian boats? Also, if the US wanted an incident, why then didn't they just seed the area with some mines that could be traced back to Iran? That is a much simpler operation and would only require the assistance of one or two 'insiders' with the transiting ships being none-the-wiser until sailing into one. They would not even have to target a Navy ship, as striking a tanker would be as or even more effective than taunting a Navy ship. As for going after their oil, I would think the route taken with Libya produces much better results. These people aren't stupid you know....

Chaotic Synaptic Activity has for his weekly series Monday Maritime Matters the distinguished career of US Navy Rear Admiral Julius A. Furer.

gCaptain has a story related to the US-Iran encounter: "The Filipino Monkey Strikes Again (and again and again…)". (It's all fun and games until a destroyer shoots you out of the water.)

New York City's South Street Seaport is home to the classic Four-masted barque PEKING except for the moment as it has left its home for a spell in the drydock. Tugster has the photos.

New York Newsday has the story of escape in "U.S. Merchant Marine cadet escapes Kenya riots" which includes a graphic video interview of Midshipman Kelvin Oteyo Orioki who is originally from Kenya.

Tims Times covers a recent lifeboat accident on the MSC INDIA that cost the lives of two of the crew.

PinoyPress has "To Address Shortage of Maritime Officers, Industry Turns to PR" as natives see a career as a seafarer as being 'wimpy.' Seeing how many seafarers die each year I wonder what that is in comparison to...

BitterEnd has the story on the risk to our electronic society, including the GPS Network from increasing solar activity in "Is it the end of the world as we know it? Maybe"

BitterEnd also has prison time for a Brit who made a fake distress call to the UK Coast Guard.

Lloyd's List Newsroom Blog discusses the merits of slowing down ships for the environment and the implications for their customers, especially those who are operating just-in-time supply chains.

The Astute Bloggers comments on the recent Iranian harassment of US Navy vessels in the Gulf noting that this is what you get when you follow a policy of appeasement. Seeing that the lower tagline for this blog has long been 'Appeasement is for suckers', I tend to agree with the comment.

EU Referendum has an update on Europe's GPS System, confirming their earlier prediction that the EU had greatly underestimated the system's cost in "Galileo costs to "skyrocket" - shock!"

South Shields Daily Photo has "Waiting for a lady", the lady being the HMS ILLUSTRIOUS.

Macsmind has "Huffington Post needs to Post an Immediate Apology to the US Navy" as the moonbats over there seem to think the US Navy invented the encounter with the Iranian speedboats.

Maritime Compass has details of an opening for an Acting Curator of History at the Intrepid Sea, Air & Space Museum.

Free Money Finance has "Top 10 Overpaid Jobs". US West Coast Longshoremen come in at number 8 and that will not surprise anyone in the industry.

OCRA Marine covers the Suez Canal toll hike as Egypt attempts to take advantage of the growth of shipping due to booms in India and China. The Suez is Egypt's third biggest source of income. Go read which are the first two.

The Yankee Sailor has "Grim News on Shipbuilding". US Navy shipbuilding that is.

Also, CDR Salamander continues to make the case against the US Navy shipbuilding Program in "Shipbuilding graphs"

Subtopia has a history of "Floating Prisons, and Other Miniature Prefabricated Islands of Carceral Territoriality" (Found via Marshallastor)

thenewfederalist.eu has "Arctic Oil and the Law of the Seize"

Steeljaw Scribe has more bad news for Russia's military export industry in "Six Test Firings = Zero Hits: Indian Navy Refuses Sub Delivery". One would hope that India will eventually get the message that you can't build a dependable modern military on the cheap.

Robin Storm has "Air-drop in effort to free trawler from ice". The Air Drop was courtesy of the US Air Force which flew to the Antarctic where the fishing vessel ran into trouble. Just one more ship in trouble in the Antarctic. Move along, nothing to see here.

CBS News Program, 60 Minutes, documents how Bluefin Tuna are being hunted to extinction in the Mediterranean Sea. The program notes that it is illegal to use spotter planes to hunt the tuna, but there is no enforcement to prevent their use. Europe might talk loud about saving the planet, yet they are pretty silent as their own waters are picked clean of fish. You can find the story and full video program here.

Marine Buzz has "Marine Robots use Intelligence of Fish to Navigate at Sea" which explains how fish navigate, and Marine Buzz also has photos of the "World’s First Underwater Sculpture Park"

YouTube member Mikeypuff posted an example of how Longshoremen take loving care of your car when you ship it overseas. (I have driven a Porsche, once. It was in the middle of the Atlantic on a car carrier.)

Non-coverage waived by ignoring reports of unseaworthiness - The US Court of Appeals for the Fifth Circuit ruled that an insurer waived its right to not cover the losses arises from a marine casualty when it ignored reports that the vessel was unseaworthy prior to commencing the voyage. In the instant case, a jack-up barge sank in the Gulf of Mexico while attempting to jack-up at an offshore facility. Plaintiff underwriters provided both Hull & Machinery coverage and Protection & Indemnity coverage. Defendant financial company had a mortgage on the barge. The financial company was a loss payee under the Hull policy and an insured under the P&I policy. Immediately after the casualty, the underwriter received several reports stating that the sinking was caused by the failure of the jacking gear on one of legs of the barge and that the barge owner was aware of the failure prior to commencement of the voyage. Under the policy, such knowledge on the part of the insured constituted a breach of the warranty of seaworthiness and obviated the obligation of the underwriter to defend and indemnify for the loss. In part because there was a pending personal injury claim, the underwriter elected to proceed with its coverage and it paid claims submitted by the barge owner and the financial company. Later, the instant suit was brought against the financial company seeking recovery of part of the amount paid. The court held that payment of the claim without issuing a reservation-of-rights letter or taking other appropriate action constituted a waiver of the underwriter’s rights for breach of the warranty of seaworthiness. North American Specialty Insurance Co. v. Debis Financial Services, Inc., No. 06-30955 (5th Cir., October 25, 2007). Note: This decision was originally issued as an unpublished decision. It was reissued on January 10, 2008 as a published decision, with no obvious changes. - Dennis Bryant Holland & Knight homepage (Used with Permission)

Fog slows China’s power supply - SHANGHAI 11 January – Fog continues to hinder all traffic in the Yangtze delta. Several hundred vessels are out at sea, waiting for the fog to clear so they can enter the ports. With visibility below 100m on some stretches, the fleet of ageing barges that sail without navigational equipment is not allowed to leave port – which has led to a major problem for the city’s coal-burning power plants. To ensure supply, the Marine Safety Administration has given priority clearance to coal transport, opening special channels, whether there is fog or not. The fog has been blanketing large parts of China, both coastal and inland, with visibility sometimes below 50m for long periods. Since last week, ferries have repeatedly been ordered to shore, while most flights to and from both Shanghai’s and Nanjing’s airports have been delayed. Highways have seen a multitude of bloody pile-ups, forcing authorities to shut them to avoid further accidents. Air quality is rapidly deteriorating because of the continuing fog. - Fairplay Homepage (Used with Permission)