This Weeks Photos:
This week brings a couple photos of Beluga Shipping:

The Beluga Group, with its headquarters in Bremen, Germany, operates world-wide as a specialist for project and heavy-lift cargo.

Our fleet of multipurpose heavy-lift project carriers is fully available to our customers for complex challenges in the marine transportation field. Our special-purpose vessels are young and state-of-the-art, and are distinctive for their powerful cranes, their flexibility due to adjustable tweendecks and their high service speed.

We offer you 100% reliability, safety and quality in transporting your sensitive freight, 365 days a year, and a highly qualified team at your side to provide maximum 24/7 service in every conceivable regard - because there is one thing we want more than anything else: 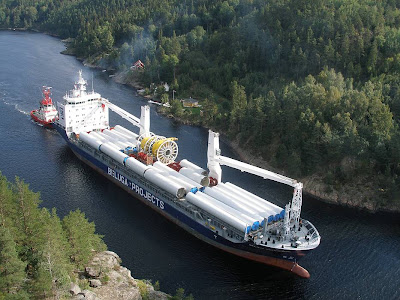 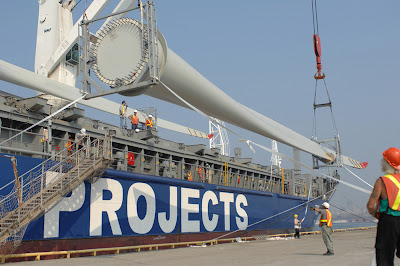 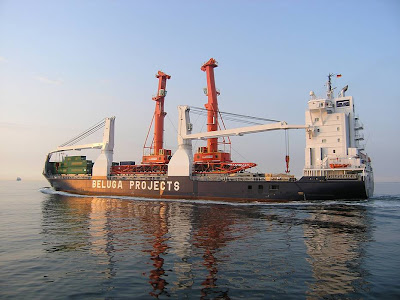 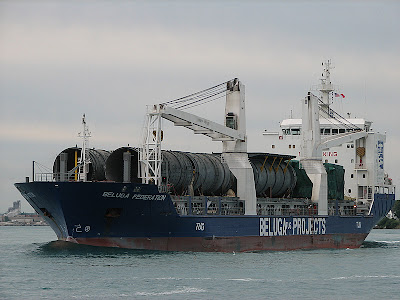 SAILORS, MARINERS & WARRIORS LEAGUE has a story on the first black US Marines.

Chaotic Synaptic Activity also Honors the Maritime World with a weekly series in his Monday Maritime Matters. Last week he covered the Story of Medal of Honor recipient Master Sergeant Roy Benavidez who was also honored by the US Navy which named the USNS BENAVIDEZ (T-AKR 306) after him. So go read the story. Where is the movie on this guy?

The BBC has a peek into the world of Maritime Search and Rescue in "Rescue aided from 8,000 miles away"

The BBC also has "In pictures: Antarctic ship rescue" which includes the photo below: 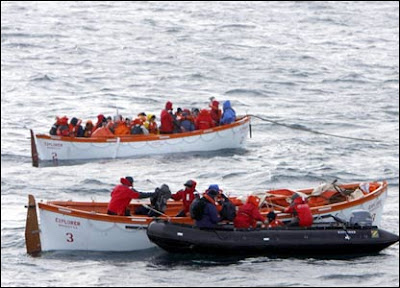 The BBC also has photos taken by passengers from previous voyages.

ABC News also has photos including this one: 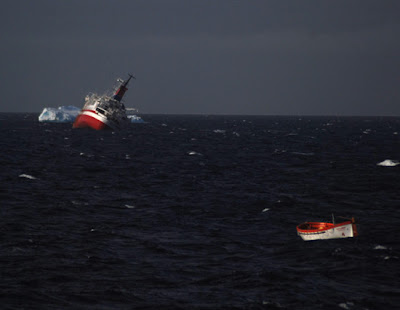 The NY Times also has some interesting photos of the sinking, including this one: 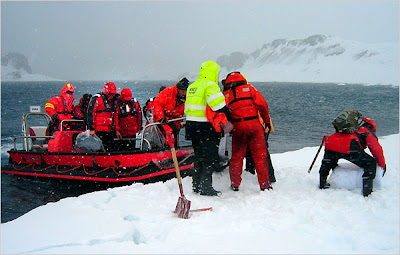 Rescued passengers of the Explorer arriving on King George Island, Antarctica. Even its captain and chief officer, who had stayed to operate the bilge pumps in the hope of salvation, had long ago evacuated when the Chilean Navy said the little red ship had gone down. - NY Times

Go and see what became of the liferafts. (Theoretically, the crew would have pulled them up onto the ice, or at least tried...)

No fears for those looking to follow in their wake, in thinking that the opportunity is now lost. The large cruiseship STAR PRINCESS is heading off to Antarctica in January. But be warned, the ship is not Ice-classed (Class: +100A1). At least the EXPLORER was ice-classed. (Class:

1A1 ICE-A(for max draught 4.20 m) Passenger Ship). Oddly enough, the NATIONAL GEOGRAPHIC ENDEAVOUR that came to the rescue is being presented as a research vessel. It is actually a cruise ship, and is even older than the EXPLORER.

Some people might be shocked that the ship would have sunk from what was reported to be a 'fist-sized' hole. Well, the smallest hole will sink any size ship, given enough time and access to enough of the ship. Now this hole might have resulted in rapid flooding, depending on how far under the waterline it was located. Here is a flow chart for holes according to depth underwater. 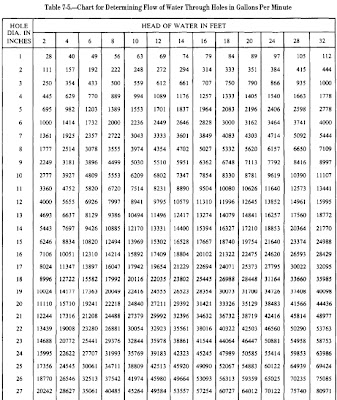 The other issue is watertight integrity between compartments. If only one compartment was holed, then I would suspect that the ship would have stayed afloat, provided that the listing was not too great. Seeing that it was about 90 minutes after being holed that the order to abandon ship was given, I would suspect that they managed to check the watertight integrity of the compartments. However, once the order was given to abandon ship, the available manpower to fight the flooding was surely quickly diminished as those most able to keep the ship afloat would also be those most needed to man the lifeboats. (Just my opinion, what actually happened is a story for the Captain to tell.)

Sea * Fever covers another sinking, this one the intentional sinking of the TEXAS CLIPPER in order that she can spend the rest of her days serving as an artificial reef.

Robin Storm has the development of improved radars that can see monster waves, giving ships some time to react. 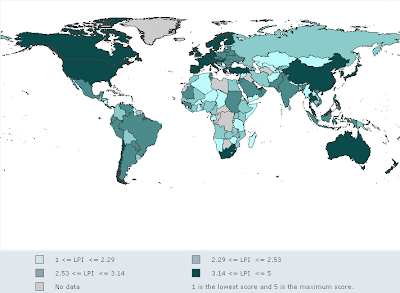 ABHABER.EU has an agreement between Greece and Turkey concerning illegal immigrants caught at sea.

Maritime Accident Casebook has news of opportunistic use for wine barrels that were in a container washed ashore from the MSC NAPOLI.

Bitter End expresses concern at how the US Coast Guard is rapidly decommissioning many aids to navigation, in effect losing a very dependable backup system for the day (if ever) GPS fails us.

I cover the possible sale of Point No Point Lighthouse offshore of Maryland. It however, will remain an active Aid to Navigation (unlike those mentioned in the Bitter End story) and the buyer will have to permit access to the light as needed. (How is that for efficiency. They used to pay lighthouse keepers. Now you get to pay for the honor, and you don't even get to touch the light. Or maybe they will leave you a spare bulb?)

What is a dead sailor worth? According to a story covered by The Monitor, $300. Go read it for the details.

There is lots of concern in the US (by some) that illegal aliens should not fear arrest for coming forward to the police to alert them about other crimes taking place and reporting when they are a victim of crime. I think that is a horrible idea. Why mention it here? Just go to Alaska Report and see what happened to Captain Jim Frary and the crew of his fishing vessel when he reported his vessel to be in distress. This is just one more example of criminalization of the seafarer. (In all fairness, he probably should have been arrested. However, they used the fact that he was a convicted criminal to search for anything they can charge them with.)

Molten Eagle covers the latest US-China incident in which the USS KITTY HAWK was denied a Thanksgiving port call in China-controlled Hong Kong.

Springbored's Springboard might have an explanation why the KITTY HAWK was denied entry into Hong Kong. Seems that the blame can be pinned on San Francisco Mayor Gavin Newsom.

Never Sea Land has an image that might be helpful in solving the mermaid problem. (Never heard of it before, but then again I never gave the issue any thought.)

Kiwi as Sea gets some time ashore in Santa Cruz, and shockingly acts like a sailor. He even gets to play the ever-popular sailor game 'I can see the ship, but I can't get to it!' Go and read it to see what I mean. Feel free to comment below your experiences, if you have ever played this game.

Tugster proves that you can make a post out of most anything, including 'Tillers'.

THE PRIVATE ISLANDS BLOG has the sale of New York's East River's South Brother Island (the last privately held island in the river) to the City of New York.

EU Observer has an update on the Norway - EU Salmon War. They also have news of the approval of public funds to save the EU's GPS Program 'Galileo', earmarking more than they do for farm aid, which is a first.

Telegraph (UK) has the crazy story concerning UK fishing vessels throwing back many times the amount of fish they catch in order to stay under their EU quotas. The rub is that the fish are already dead by the time they are 'released'. Surely this is probably happening all over the EU, in order to 'save the fish'.

UberReview has the cool story "Build Your Own Island from Plastic Bottles, The Ultimate DIY Project". Really, cool project.

National Geographic's 23 November photo of the day is a manatee: 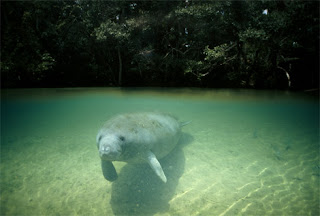 The INTREPID Sea, Air & Space Museum is giving away 10 tickets to ride the ship across NY Harbor when it returns to its berth late next year:

RIDE ABOARD INTREPID DURING HER RETURN TRIP - Enter yourself for a chance to win a trip for you and a guest aboard Intrepid as she sails back to Pier 86 in Manhattan. All entries must be completed by February 28th, 2008. Must be 18 years or older to enter. Ten (10) entrants will be selected and notified via email and phone. Estimated date of Intrepid’s return trip is September 26th, 2008. - Homepage

CBP – Hawaiian coastwise cruises - The US Customs and Border Protection (CBP) proposes new criteria to be used to determine whether non-coastwise-qualified vessels are in violation of the Passenger Vessel Services Act when engaging in cruise itineraries in which passengers board at a US port, the vessel calls at several Hawaiian ports, and then the vessel proceeds to a foreign port for a brief period before returning the passengers to the original US port of embarkation. The proposed criteria would find such voyages to be violative of the Act unless: (1) the stop in the foreign port lasts at least 48 hours; (2) the amount of time at the foreign port is more than 50% of the total time at the US ports of call; and (3) the passengers are permitted to go ashore temporarily at the foreign port. Comments on the proposal should be submitted by December 21. 72 Fed. Reg. 65487 (November 21, 2007). - Dennis Bryant Holland & Knight homepage (Used with Permission)

EU threat to Croatian yards - ZAGREB 20 November – The Croatian shipbuilding industry is under threat of significant change because of the high level of subsidy it receives, according to a Bloomberg report. Subsidies, currently amounting to 2.6bn kuna ($517M), are a key issue in Croatia’s entry talks to join the European Union. Shipbuilding is an important industry in Croatia and the country boasts at least 10 sizeable yards of which six are state-owned – and of the latter only the Uljanik yard is operating without subsidy. Croatia is the world’s sixth largest shipbuilder employing 11,000 people. There are fears that yards will have to close if Croatia is successful in its entry negotiations. Earlier this month the European Commission said that Croatia needed to make substantial efforts to restructure its shipbuilding industry. With an election due on November 25, this is a very topical issue. The prime minister, Ivo Sanader, is delaying any decision on the yards until after the vote. His party aims to make each shipyard viable without subsidy and his main competing party has similar ideas, but such action only suggests major lay-offs, which would make unemployment – already 14.1% – the highest in the EU. - Fairplay Homepage (Used with Permission)

Thanks, and yes, where is the movie?