This Weeks Photos:
BC Ferries first 'Super C-Class' vessel, the COASTAL RENAISSANCE, is currently transiting from it's shipyard in Germany to its new home in Canada's Pacific Northwest.

In early 2008, we will welcome the Coastal Renaissance, the first of our three new Super C-class ships, to the Departure Bay - Horseshoe Bay route. By mid 2008, the Coastal Inspiration and Coastal Celebration will have joined the fleet and will operate between Tsawwassen - Duke Point and Tsawwassen - Swartz Bay, respectively.

When completed, the three Super Cs will be the largest double-ended ferries in the world, featuring two passenger decks providing an unprecedented travel experience for BC Ferries customers. Passengers will find more space, more comfortable seating and better viewing areas onboard the Coastal Renaissance, Coastal Inspiration and Coastal Celebration, as well as many enhanced food and retail services. - BC Ferries 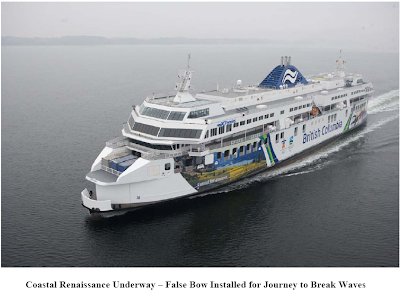 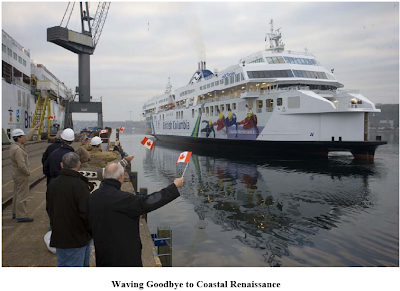 BC Ferries Newest - the COASTAL RENAISSANCE
This was the vessel that first made international headlines over claims that the propeller markings were too similar to nazi swastikas. They were changed. See Canada.com for the story.

Here is the official BC Ferries page covering their newbuildings. At least two more are being constructed.

H/T to Bitter End who alerted me to this item via his post "New BC Ferry , "Coastal Renaissance"" So go read it and find a link to ever more photos including of the christening. Seems that everyone was in attendance at the ceremony in Germany, including Native Americans and Mounties!

Eagle Speak has "J. Peter Pham: Responding to Piracy and Other African Maritime Security Challenges". Also be sure to check out his great weekly series "Sunday Ship History: The Original LCSs"

I cover Hawaii Superferry's reopening of it's ticket sales. Service is expected to restart on 1 December.

Ocean Navigator Online has some evidence on why solo sailing races are a bad idea in "Sailing Hallucinations". Nothing like yelling for your imaginary sailing partner to relieve you at the helm!

SAILORS, MARINERS & WARRIORS LEAGUE has the totally bizarre story "Russian Frogman Claims He Killed Real Life British 'James Bond' Placing Mine On Khruschev's Ship in UK Waters". Reading the story will only make you more confused. Than again, given the suspicious circumstances of the death of UK diver Commander Lionel 'Buster' Crabb, I guess the story is possible. This of course is what happens when Government's refuse to tell the story, others will just invent one to their liking.

Cargo Law has photos of a partial collapse of a container crane in Port Kwanyang, South Korea.

Robin Storm has a great summary of recent storm action including photos of the Black Sea / Sea of Azov disasters.

gCaptain has "A Viking Ship Redesigned for Modern Use"

gCaptain also has "The Best Knives for the Pro-Mariner" just in case your wondering to get your favorite sailor. I prefer Myerchin knives as well as Gerber just to have something in my pocket. Then again, despite having a gazillion knives, I have never had a Spyderco which seems to be a favorite. Gerber also makes a great alternative to the 'Leatherman'. So go to gCaptain and add your two cents.

Aftenposten covers Norway's declaration of victory in its salmon war against the EU.

Bitter End has "Editorial: It's time to revamp the Washington State DOT"

American Shipper has the story of possible imports to the mainland US of some fruit grown in Hawaii, provided it's irradiated.

Bellona has the conviction of Igor Senin, former deputy mayor of the closed military city of Zaozersk in Russia’s northern Murmansk Region, who confessed to planning to bomb an oil tanker. (Note: yes, Russia still has cities closed to outsiders. At least 42 of them.)

Gateway Pundit has "Peace Protesters Get Unruly-- Then Get Maced"

Protesting is one thing. Blockading roads is another. Here is a suggestion, stay away from the ports. There are no decision makers there. You just risk getting hurt. Not for anything, but eventually, one of those trucks is not going to stop and he just might get away with it using the defense "I was afraid that they were going to pull me from the truck and kill me."
---------------------------------

Marine Buzz has news of the US Navy sending the amphibious assault ships, USS ESSEX and USS KEARSARGEARE to Bangladesh as part of the cyclone relief effort.

Maritime Compass notes that yes, they used to flog sailors, and often.

Never Sea Land has "Japan might kill world’s only white whale". Japan is off to kill about a 1,000 whales, including 50 endangered humpbacks, all in the name of 'science'.

Tugster wonders if you can guess what was the 'first life' of the 127 year old workboat CHARLOTTE.

Many blogs announced the appearance of the HMS-SOMERSET-CO blog, but have you checked it out lately?

Engadget has "Welsh village under attack by GPS-blind drivers" 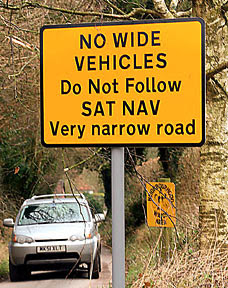 Marketplace.Org has an audio series asking "Is the Consumer Economy Sustainable?" which of course includes shipping and port productivity.

Marex Newsletter covers the recent patent award to Trailer Bridge and Malcom P. McLean (the father of container transport) for the truly imaginative and simplified loading and discharge of 53 foot containers.

San Francisco – update on spill response - The US Coast Guard issued a press release updating the status of the response to the recent oil spill in San Francisco Bay. Now that the vast majority of recoverable oil has been removed from the water, efforts are being concentrated on the shorelines. A second press release links various photographs. A third press release provides background information on the Unified Command process. The National Oceanic and Atmospheric Administration (NOAA) issued a news release summarizing its efforts in support of the spill response in San Francisco Bay. The Office of the Governor of California issued a statement saying that the state has launched its own investigation into the causes of the oil spill. (11/15/07). - Dennis Bryant Holland & Knight homepage (Used with Permission)

International row over dead master - TAIPEI 14 November – Taiwan has questioned Indonesia's account of how the master of a Taiwanese fishing vessel died. Pi Chen Hsu, master of the Sheng Eng 168, died along with three of his crew after a fracas with Indonesian deckhands on 8 November. The Guam-bound vessel had reportedly left Tong Kang harbour when the Indonesian Navy received a report of piracy in its eastern province of West Papua. According to the Indonesians, a fight broke out over complaints of harassment of the Indonesian deckhands, which ended when the captain jumped overboard. Earlier reports that the deaths occurred after the Navy arrived have now been discounted. “The case is not that simple [and] it is strange,” declared Phoebe Yeh, a Taiwanese foreign affairs spokeswoman, speaking to Fairplay today. The story became more confused when the Taipei Times reported the recovery of the captain’s body on board the vessel, which is lying untouched in the Indonesian port of Jayapura to preserve evidence. The missing seamen, who were identified as Jou Hwang Jerlin, Sheu Ching Wen, Jou Hwang Ke Mong, are relatives. - Fairplay Homepage (Used with Permission)

Greens block palm oil shipments - JAKARTA 16 November – Greenpeace environmentalists are blocking a shipment of palm oil in protest at CO2 emissions from the crop’s cultivation and export. Indonesian farmers unwittingly release millions of tonnes of carbon dioxide by burning peat, which negates the environmental benefits of developing palm-based biodiesel fuel as a renewable source of energy. The stand-off is reportedly taking place at Dumai port in Sumatra where the 40,293dwt tanker Westama is being prevented from sailing out by Greenpeace vessel Rainbow Warrior, the movement’s website says. Greenpeace officials were unavailable for comment, though the organisation claims that the Westama is carrying 30,000 tonnes of palm oil. It is believed the Rainbow Warrior is believed positioned in such a way as to prevent tugs from assisting the tanker. Palm oil, which is edible or used as cooking oil, is widely acknowledged to have acidic properties. Unlike Malaysia which buries its felled palm trees to act as fertiliser substitutes, Indonesia burns them. The smog causes health problems across Southeast Asia and is a hazard to navigation on one of the world's major shipping lanes. - Fairplay Homepage (Used with Permission)

Previous Editions:
Here or click on the label below 'MaritimeMonday'.
.
Posted by Fred Fry at Monday, November 19, 2007

seems the link to the DenDen salvage is not working.

as always, thanks for linking to our blog.