Project Valour-IT, in memory of SFC William V. Ziegenfuss, helps provide voice-controlled and adaptive laptop computers to wounded Soldiers, Sailors, Airmen and Marines recovering from hand wounds and other severe injuries at major military medical centers. Operating laptops by speaking into a microphone or using other adaptive technologies, our wounded heroes are able to send and receive messages from friends and loved ones, surf the 'Net, and communicate with buddies still in the field. The experience of MAJ Charles “Chuck” Ziegenfuss, a partner in the project who suffered serious hand wounds while serving in Iraq, illustrates how important these laptops can be to a wounded service member's recovery. - website

Every cent raised for Project Valour-IT goes directly to the purchase and shipment of laptops for severely wounded service members. As of October 2007, Valour-IT has distributed over 1500 laptops to severely wounded Soldiers, Sailors, Airmen and Marines across the country. - website

Christmas Season is coming. Here is a great way to be a 'Secret Santa'!

The activities of Royal Arctic cover a number of subsidiaries and divisions. Approximately 650 people are employed in the organisation. The parent company is Royal Arctic Line Ltd, which is owned by the Home Rule Government of Greenland.

Royal Arctic Line offers a liner service (year around) all year round every week between Greenland and the rest of the world via Aalborg, Denmark, as well as shipments to Greenlandic towns.

Forwarding activities such as air transport, combined air–ship transport and consolidation are carried out by Royal Arctic Spedition. Royal Arctic Liner agency represents Royal Arctic Line in Denmark where in excess of 85,000 consignments are booked and co-ordinated per year. ACO (Arctic Container Operation) is responsible for the practical handling of the goods that are to be sent to or from Greenland via Aalborg in Denmark. - Website

Their photo gallery can be found here. 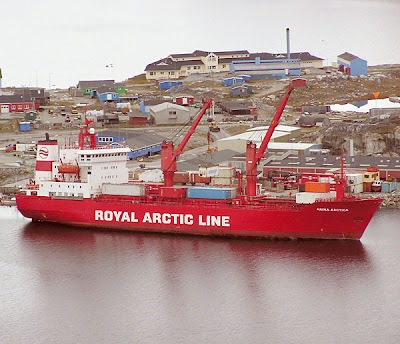 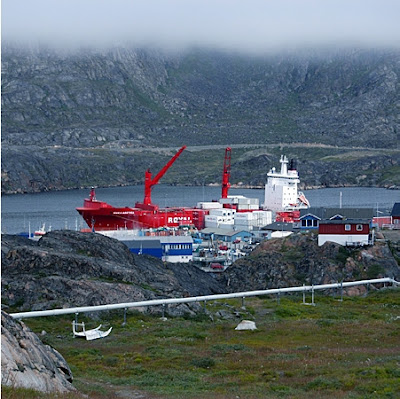 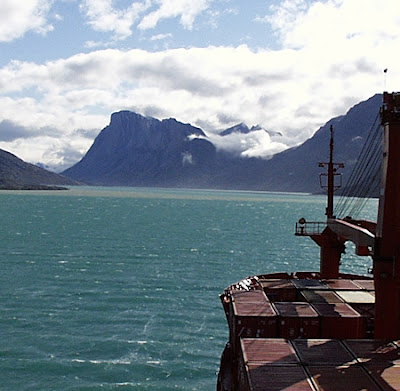 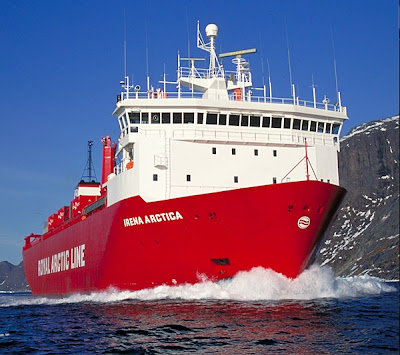 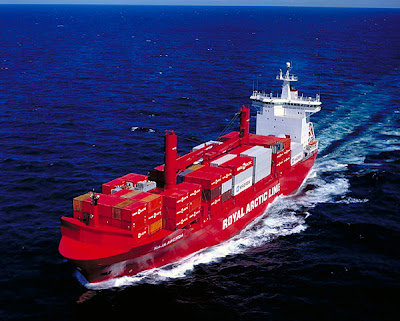 Eagle Speak has pirates in his sights in "Update: Navy ships v Somali pirates" and "Somalia: More on release of S. Korean boats" with each linking to earlier reports on both issues.

Also, be sure to check out his weekly series "Sunday Ship History: Degaussing Ships"

Scandinavian Shipping Gazette has this week's must read, as they have the story of the hijacking of the DANICA WHITE in Somali waters as told by the ship's captain, Captain Bent Mikkelsen. (Oddly enough, this makes two Captains for this vessel who have been detained, the other being Captain Villy Larson, who was jailed by the US Coast Guard. This was covered in Maritime Monday 50)

Spiegel has "HOSTILE SHORES - Greece Casting off Asylum Seekers" which includes allegations of torture by the Greece Coast Guard. (Found at EU Referendum: "I thought only Americans did nasty things")

Hindustan Times covers the discovery of 8 Indians who paid to be smuggled from India to England, only to end up (after a long journey) in a container destined for Sweden. Their journey is not over as they were deported, but not to India. Go read the story to find out where. No, not England either.

gCaptain asks "Was the titanic sunk by a small key?"

gCaptain also has "10 Things to remember if you’re shipwrecked"

Maritime Accident Casebook has the accident report for the lifeboat accident on the STENA BRITANNICA.

The Times Online covers the claim that Odyssey Marine Exploration exaggerated the value of their salvage claim.

The October issue of Marine Log is available online: 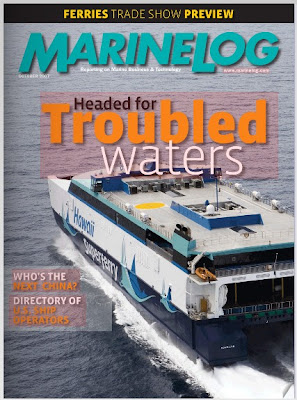 Robin Storm has an update on the USUMACINTA rig accident which includes video of some offshore oil rig mishaps.

MarEx Newsletter has more reader feedback in "Mariners Weigh In Again: "Neglect of Mariners" Op-Ed Draws Reaction". Every once in a while I wonder if letting my license lapse was a good idea. Then it is reminders like this that confirm that it probably was.

SAILORS, MARINERS & WARRIORS LEAGUE has an update on the Cruiseship SEA DIAMOND sinking in "Cruise Company Blames Map For Greece Ship Sinking" (By the way, they are called charts.) Apparently there is some dispute about the accusation, which I would think would be a simply matter of fact. Is the chart accurate, yes or no?

Gulf News has an update on the missing ship REEF AZANIA, which went missing in June, in "Cargo ship officially declared lost"

Kiwi at Sea joins another ship and has a revelation: "I realise all my previous ships were crap". The previous post mentioned "James Cook" So I guess he has joined the RSS JAMES COOK which is less than a year old.

Tugster has photos of an assortment of tugs around New York Harbor.

Uber Review has and $8 million No Man’s Land Fort 'Island' for sale. Looks really cool. I want it. Just can't locate where I left those missing millions. It is much cooler than SEALAND, but this island falls under UK law which SEALAND does not.

Maritime Compass has a job posting for the Maritime Center in Norfolk, VA: "Position:EDUCATION DIRECTOR/EDUCATION MANAGER"

Mr. Boat Blog has video of fire-fighting planes loading up at a lake. I then found this video of another plane shooting down a narrow channel. Talk about a hazard to navigation!

the horse's mouth recognizes the start of crab season.

Never Sea Land has video of a sailboat going up against a cruiseship.

Senate Foreign Relations Committee approves UNCLOS - The Senate Committee on Foreign Relations conducted a business meeting at which, among other things, consideration was given to the United Nations Convention on the Law of the Sea (UNCLOS). Committee Chair Joseph Biden (D-DE) commenced the meeting by expressing his strong support for adoption of the Convention. As noted in a press release by Senator Richard Lugar (R-IN), adoption of the Convention was recommended by a vote of 17 in favor with four opposed. The measure now goes to the floor for consideration by the entire Senate. The United States remains the only major maritime nation not party to this 25-year old treaty and thus has no seat at the table as important issues such as seabed claims more than 200 miles offshore are discussed. The treaty may have room for improvement, but it is difficult for the United States to effect change if it is not a party. (10/31/07). - Dennis Bryant Holland & Knight homepage (Used with Permission)

You can thank the Soviet Union for most of the disagreeable parts of the treaty. Funny enough, Russia would have to pay tax to the UN if they ever capitalize on their Artic land grab thanks to this treaty. Good luck collecting on that bill.

'World war on talent' predicted - NEW ORLEANS 30 October – Labour shortages in the global shipping industry have spread to the engineering, procurement and construction sectors as a “World War for Talent” has erupted. That disquieting news was discussed yesterday at the Journal of Commerce’s annual BreakBulk conference in New Orleans. Grant Wattman, logistics director with CH2M Hill, told a packed session that by 2012 there will be a demand in the US job market for 18M college graduates and that need will fall 6M short. He added that the traditional US strategy of turning to immigrants to fill the void can no longer be counted on as India, China and other traditional sources for skilled workers are keeping most college graduates at home as economies there flourish. Former MarAd boss William Schubert, who is now president of International Trade & Transportation, warned that “our industry needs to do more to attract, train and retain skilled employees.” Thomas Cullins, materials management director at Fluor, pointed to the economic downturn of the early 1980s when many entry level college grads were fired as the beginning of the crisis. “Those people would have been today’s managers.” They noted that the first of the Baby Boom generation will begin retiring at 62 years of age in January. - Fairplay Homepage (Used with Permission)

APL debuts 53-footers on Pacific - SINGAPORE 31 October – APL will begin using specially designed 53-foot containers on its South China-to-LA run in a ‘major refinement’ to its transpacific service. APL said that the first reinforced ‘ocean capable’ 53-footers will be delivered next week. The 53-foot box size has become a mainstay of truck and rail transport in the US, requiring cargo to be transferred from 20, 40 and 45-foot containers at West Coast ports. According to APL, “53-foot boxes haven’t been strong enough to endure ocean transport”, so in the past, there have only been sporadic moves of such hardware on the transpacific (generally involving repositioning of new containers from Asia to the US). The new, specially built boxes have undergone pilot tests with retail customers and “successful trials led to the decision to order the big boxes for immediate use with select customers”. APL maintained that its plan “has the potential to make a significant difference to the economics of the transpacific trade”. Shippers will be offered better ‘cube economics’ and can eliminate transloading expenses; supply-chain congestion can be reduced by cutting moves (two 53-footers carry the same volume as three 40-footers), and emissions can be lowered via reductions in transloading and truck moves. “The 53-foot ocean container is a significant refinement,” asserted APL chief executive Ron Widdows. “It can’t come soon enough.” - Fairplay Homepage (Used with Permission)

Previous Editions:
Here or click on the label below 'MaritimeMonday'.
.
Posted by Fred Fry at Monday, November 05, 2007

Would you consider lending a hand to your Navy/Coast Guard bloogers? If you'd like to join the fund raising for ValOUR-IT to provide money to supply wounded troops with laptops with voice recognition software, we sure could use some help...but more importantly, the troops could use the help.

Thanks for the message. I added the link and then tested it by making a donation.

Definitely a worthy cause!

Thanks so much for this. This is a great wrap-up.