This Weeks Photo:
The attention is always on the biggest. However, those big monsters will only get the cargo into megaports, which is fine if you located near one. However, for everyone else, the cargo needs to be transshipped. This is when the small feeder ships (and barges) come into play.

Here is a photo of the Mann Lines operated container vessel BARBARA: 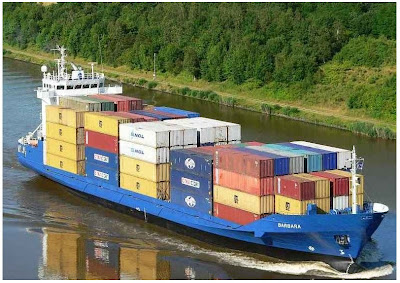 ITF softens FOC stance - SINGAPORE 24 July – The ITF has apparently softened its stand against the flags of convenience system. “Just because the vessel is registered in Panama or Liberia does not mean that it is a substandard vessel,” the federation's maritime co-ordinator Stephen Cotton told the Singapore Organisation of Seamen yesterday. “I know I will be unpopular, but our policies will have to be in line with the fact that the world is changing,” Cotton told Fairplay.
The ITF, which represents more than 4.5M workers in 148 countries, is reviewing its FOC campaign, which was launched in 1948. During this period ITF has vociferously demanded the elimination of the FOC system and has demanded a regulatory framework for the shipping industry. There remain fundamental objections to the FOC system, which is said to provide a means of avoiding labour regulation in the country of ownership. Issues such as low wages, long hours and unsafe working conditions for seafarers employed on FOC ships are still cause for concern, Cotton said. - Fairplay Homepage (Used with Permission)

Eagle Speak has the mysterious disappearance of the M/V INFINITY MARINE I which has been missing for over three weeks off Somalia.

American Shipper has International Shipholding Corp's announcement that it will be canceling it's Forest Line's Lighter Aboard Ship (LASH) vessel service. According to the story, this end the era of LASH transport as no other shipping lines operate LASH vessels.

Gates of Vienna has "The Danica White: Eight Weeks and Counting". This is from a week ago. It is now 9 weeks and counting. There has been no new developments over the last week, as far as we know.

Two accidents covered at gCaptain. First, there is the cargo vessel VICTUS demolishing a holiday house when it runs aground in the Netherlands. Then, there is the amazing collision in the Gulf of Japan between the bulk carrier M/V ALPHA ACTION and the containership M/V WAN HAI 307. Photos at each of the posts.

Maritime Accident Casebook has the story of the loss of the bulk carrier COOP VENTURE in a typhoon in Japan.

Sailors, Mariners & Warriors League has the discovery of radioactive material on the cruiseship BLUE LADY, ex SS NORWAY, along with a list of other hazardous waste. Of note, is that this vessel is looking for a location to be scrapped.

Maritime Links Editor's Blog thinks it is a little crazy of the New Zealand authorities to fine a Captain for not reporting a 'near-accident'. (Sometimes shipping is not much more than a managed near accident. But managed very well. No need to disect my comment.)

Gulf News has the must-read "Duty of care - not just question of compliance" commenting on the Al-SALAM BOCCACCIO 98 sinking and comments on why the potential for more tragic accidents exists in the Persian Gulf, Africa and Asian. (Partly due to a lack of a safety culture.)

MarEx Newsletter has the EU's threat to force Poland to close the Gdańsk Shipyard if they do not meet EU requirements to reduce production capacity by the end of this summer. (This yard was the home of the Solidarity Trade Union. I bet they did not see this unintended consequence of their fight to get out from under the Soviet Union's grip.)

Lech Walesa comments on this issue on the BBC. You can guess how he feels.

Rigzone has Venezuela's takeover of the operating contracts for two Maersk Oil drilling rigs. The question is, do they have enough domestic competence to operate them and the other rigs they have.

Bellona has a ballast tank explosion onboard a Russian submarine undergoing repairs at the Naval Repair yard Zvezdochka, in Severodivnsk, Russia.

Molten Eagle examines the photo in the Bellona article, claiming that is has been altered. The question is, for what purpose?

Space War has North Korea's refusal to recognize the sea border with (South) Korea during talks. Instead, they are demanding that the UN-drawn line be pushed south.

Hengineer posts, after a three-month hiatus, that he is serving as Third-Assistant (Fourth) Engineer onboard the USNS KANAWHA as it gets ready for Shipyard.

Tigerhawk has how Texan oilmen were responsible for the search for North Sea oil.

Ocean Navigator Blog has the ban on commercial shipping in Lake Michigan harbor, in Waukegan, Illinois in favor catering to recreational boating only. 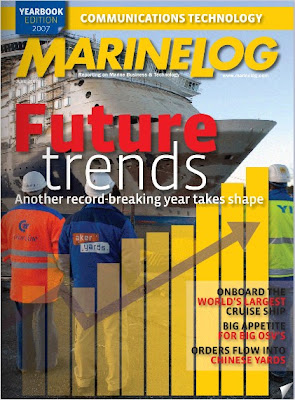 Cruise Bruise has Alaska State Legislator Jay Ramras (R) withdrawing a bill that would have benefited the cruise industry while benefiting him as a side-benefit creating a conflict of interest.

Never Sea Land has a photo and commentary of a superyacht accident literally seconds after leaving the Baglietto ship yard, in Varazze, Italy.

"thyztwizta" has posted to You Tube "Winter - North Sea"

Andrea Doria – Stockholm collision - On July 25, 1956, the Italian ocean liner ANDREA DORIA and the Swedish ocean liner STOCKHOLM collided in fog off Nantucket Island. The ANDREA DORIA sank, with a loss of 51 lives (46 passengers on the Andrea Doria and five crewmembers on the Stockholm). Subsequent investigation, while not fully conclusive, revealed navigation faults and improper use of radar by personnel on both ships. (7/25/07). - Dennis Bryant Holland & Knight homepage (Used with Permission)

Legislation to require 100% container scanning approved by Congress - The Senate and the House of Representatives have approved legislation that will, among other things, require radiation scanning of 100% of the shipping containers bound for the United States prior to loading on ships in foreign ports. The requirement will come into effect in five years after the bill is signed by the President, but it apparently includes a provision allowing the Secretary of Homeland Security to waive the requirement in two-year increments under certain circumstances. Final text of the agreed version of the Implementing the 9/11 Commission Recommendations Act of 2007 (H.R. 1) is not yet available. Speaker Nancy Pelosi (D-CA) issued a press release summarizing how the legislation will make the American people safer. Representative Thompson (D-MS) issued a press release stating that the bill implements the recommendations of the National Commission on Terrorist Attacks upon the United States.

Commentary: The legislation is lengthy and complex, and includes many salutary measures. I will limit my comments, though, to the container scanning provision, which is both unnecessary and misguided. As I noted in a previous edition of this newsletter, the technology upon which this provision relies does not work with sufficient accuracy as to be meaningful. The House Committee on Homeland Security released a Report to demonstrate how the legislation is justified by the various recommendations of the 9/11 Commission. It should be noted that when it comes to justifying the 100% container scanning requirement, the report, on page 5, refers only to a vague sentence (which was not part of any recommendation) on page 393 of the Report about the need to “appropriately screen potentially dangerous cargo”. The report omits the specific recommendation on page 391 stating: “Hard choices must be made in allocating limited resources. The U.S. government should identify and evaluate the transportation assets that need to be protected, set risk-based priorities for defending them, select the most practical and cost-effective ways of doing so, and then develop a plan, budget, and funding to implement the effort.” As the Congress well knows, scanning of all cargo is a quantum leap from screening of potentially dangerous cargo. The best that can be said for this far-reaching and potentially disruptive requirement is that it will not be pouring money down a rat-hole – it is merely advocating that future Homeland Security appropriations bills pour the money. Now that the political points have been scored, we will await the long term follow-through. (7/27/07). - Dennis Bryant Holland & Knight homepage

See Last Week's Maritime Monday for his first commentary on this issue.

Bush signs Foreign Investment Act - WASHINGTON, DC 27 July – President Bush yesterday signed the Foreign Investment and National Security Act of 2007 – a law that could have been called the “DPW not welcome here Act”. The White House says the law will “ensure a thorough and high-level review of acquisitions of US companies by foreign firms that may present security considerations.” The bill, which is now law, was born of hearings held in the wake of the Dubai Ports World debacle, where electioneering politicians in Congress made the DPW-P&O Ports deal the centrepiece of their pre-election strategy. For his part, Bush maintains that “a climate conducive to foreign investment strengthens our national security ... This Administration is committed to maintaining that climate at home, and will continue to seek it abroad.” He then went on to commend members of Congress of both parties whose leadership enabled the passage of this legislation. “The legislation also demonstrates that America can meet the challenges of the post-9/11 world while continuing to welcome foreign investment that provides well-paying jobs and economic opportunity for our citizens,” the White House said in a statement. - Fairplay Homepage (Used with Permission)

Previous Editions:
Here or click on the label below 'MaritimeMonday'.
.
Posted by Fred Fry at Monday, July 30, 2007

Once again I make your Maritime Mondays, thanks? ;)

Always interesting to read, with lots of links around the 'net.

Not to mention on your last one considering the 100% scanning bill...

That is going to cause Mexican and Canadian ports to increase their revenue, while US Ports will dwindle

The trucking industry will do just fine, though..