If you enjoyed this post, tell a friend.
Tell me about your maritime blog postings and news of interest.

As it so happens, I got aboard the vessel sometime back in the '90s. Taking pictures was frowned upon, so this is all I got. The first photo was published in Maritime Monday 9, but it turns out that I had some more. 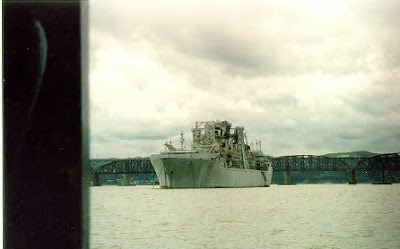 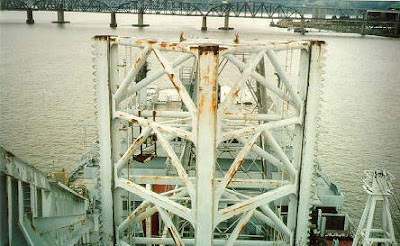 (Looking down on the deck gear of the GLOMAR EXPLORER) 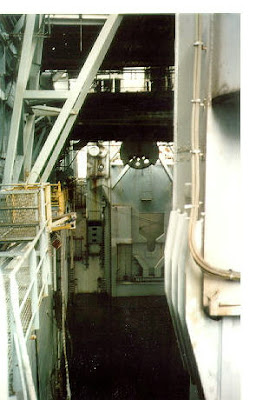 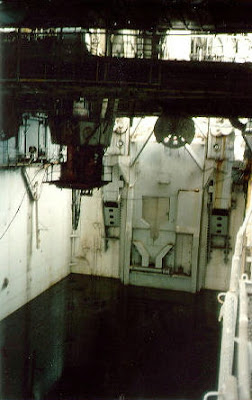 The next photo is not from the GLOMAR EXPLORER. It is from another vessel that is (or was) laid up at the Suisun Bay, California Reserve Fleet. Perhaps a reader can identify which vessel there was equipped with an indoor basketball court. 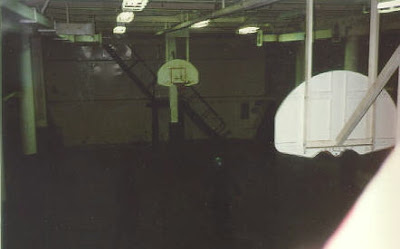 This Weeks Items:
Eagle Speak has an update on the MSC NAPOLI's failed refloating attempt. Dan Kitwood has posted a picture of the vessel here on Flickr, where it is obvious to see that the hull is cracked just forward of the house. (Would that make this the third MSC vessel to crack in two? At least two others have suffered this fate while at sea.)

Philly.com has a dramatic photo and story of the Atlantic Ocean rescue by the containership CAP SARAY of solo sailor Pierre Andre Huglo from on top of his capsized sailboat. He had managed to escape the hull with a satphone and handheld GPS and quickly called for help. Go read the whole story, including a classic comment by the Captain of the CAP SARAY at the end.

gCaptain has the sinking of the Ro-Ro DON PEDRO off the coast of Ibiza, Spain. Maritime Links Editor's Blog notes the resulting oil pollution and expects the media coverage to result in more trouble for professional mariners. (If you want to solve the problem of car traffic, just subject car drivers to a tenth of the training requirements thrust upon seafarers.)

MarEx Newsletter has "UNHCR and IMO Meet to Discuss Rising Death Toll at Sea" which includes this jewel of a quote:

“Finding people clinging to fishing pens, having been dumped in the water by unknown boats at midnight is not a one-off occurrence nor, unfortunately, is the refusal by coast states to allow their disembarkation after rescue.”

MarEx Newsletter also has "Ecuador & Chevron: Trouble in Paradise", noting that the biggest threat to the Galapagos Islands just might be Ecuador itself.

CDR Salamander calls for 'more heads on pikes' in response to the ongoing embarrassment of the defective USS SAN ANTONIO which is probably the flagship for the phrase, 'a boat is a hole in the water you throw money into.' Problem is, this is supposed to be the first in a new class of Navy amphibious warships. I have to wonder if this program is a gift to our enemies.

The BBC has "'Hundreds died' off Yemen coast"

The Torch (Canada) has Canada's planned purchase of Arctic Offshore Patrol Ships as part of their plan to protect their sovereignty over the area, which has been reportedly used more by US and UK submarines than by Canadian vessels. He has a follow-up post here.

Aftenposten (Norway) covers the collision of the ferry MASTER CAT with the dock while leaving the Port of Hanstholm, Denmark for Norway.

The Pilot Boat has photos of the arrival of the new BOURBON OPALE in the Gulf of Mexico.

The Australian has the story of US products being smuggled out of Dubai into Iran against US sanctions.

The International Herald Tribune has Turkey's agreement with Iran to develop offshore gas fields as the major oil players are prohibited from doing so due to US sanctions.

Offshore Oil & Gas Development Blog has the mystery of a self-renewing (refilling) oilfield in the Gulf of Mexico.

Life at Sea explains "Why Seamen Cannot Save?". Money that is.

FILMSCHATTEN has posted a copy of the video "The Seafarers"

The Seafarers - Directed (1953) by Stanley Kubrick. Stanley Kubrick's first feature made in color. Lost for over 40 years! The documentary extolls the benefits of membership to the Seafarers International Union. Narrated by Don Hollenbeck .

Get into Academy has "Military Or Not? Coast Guard Academy And Merchant Marine Academy"

The Shipspotting Forum discusses the decline of the United Kingdom's Merchant Navy (merchant fleet) below 300 ships.

The US Coast Guard has the multimedia presentation "Seasonal Buoys - Aids to Navigation Team New York" where they swap out winter buoys for summer ones and "Coast Guard Cutter Juniper Converts Buoys to LED Lighting". Both presentations have great photos and commentaries so go check them out. (Note: voice commentary for those who may be at work or have their computer on mute. Remember to press the play button!)

Hindustan Times has news that Mumbai, India will be the sixtieth port to join the US's Container Security Initiative.

Paying attention has the debate on whether tankers are banned from British Columbia waters or not. It has not been an issue until recently since the Alberta oil sands project has become viable.

Third Party Logistics has the container cargo backlog at Jawaharlal Nehru Port in India due to Indian Railways inability to clear the port of import containers fast enough.

Cargo Law has photos of the rush to get containers into the Port of Shanghai in advance of the ending of an export tax rebate.

Maritime Compass reports on the find of only the second unused ticket for the TITANIC known to exist.

Tim Blair has a giant Yellow rubber duckie in the US and in France. A Series of six photos of the original duck can be found at Florentijn Hofman.

Second Circuit found all three ships at fault in collision - The US Court of Appeals for the Second Circuit reversed the trial court’s finding that one ship was solely at fault in a collision and remanded the case to the trial court to apportion the fault, directing the trial court “to consider the relative culpability of each vessel and the relative extent to which the culpability of each caused the collision.” In the instant case, two ships collided in the English Channel and another ship was involved in the incident, although not in the physical contact. The trial court determined that one of the three ships was so largely at fault that the court assigned full liability to it for damages arising from the collision. On appeal, the court held that all three ships had been negligent to some extent. The Second Circuit upheld the trial court’s determination that the Pennsylvania Rule, which places a heavy burden on any vessel that violates a statute, would not apply if the 1910 Collision Convention applies. Otal Investments Ltd. v. M.V. Clary, No. 06-0591 (2nd Cir., July 6, 2007). - Dennis Bryant Holland & Knight homepage (Used with Permission)

Hearing on TWIC program - On July 12, the Subcommittee on Coast Guard and Maritime Transportation of the House Committee on Transportation and Infrastructure conducted an oversight hearing on the Transportation Worker Identification Credential (TWIC) program. Chairman Elijah Cummings (D-MD) noted the extended delay in issuance of the credentials and continuing uncertainty regarding the card readers. Ms. Maurine Fanguy, Transportation Security Administration (TSA), discussed some of the obstacles that prevented the agency from meeting the planned deadline for implementation of the TWIC enrollment process. Rear Admiral Brian Solerno, USCG, discussed the maritime security system and adjustments to the TWIC program. Mr. Larry I. Willis, AFL-CIO, testified concerning the impact of the TWIC program on port, maritime, rail, and related workers, expressing particular concern about the methods for determining security risks. Mr. Michael Rodriguez, International Association of Masters, Mates & Pilots, discussed the potential adverse impact of the TWIC program on mariners, including problems presented by incompatible state and local security systems and the fact that foreign mariners are not included in the TWIC program. Mr. Otto Candies, III, representing the Offshore Marine Service Association (OMSA), discussed the impact of the TWIC program on ship owners and operators, expressing doubt that card readers can be made to work properly on ships, especially in conditions of high humidity and adverse weather. (7/12/07). - Dennis Bryant Holland & Knight homepage (Used with Permission)

Spain arrests treasure hunter - ALGECIRAS 12 July – Spanish security forces have arrested the Ocean Alert, a treasure-hunting ship owned by Odyssey Marine Exploration. Spain’s paramilitary Guardia Civil force stormed the ship and took it to Algeciras around 1000 as it sailed 3n-miles off Gibraltar. US-based Odyssey Marine Exploration has claimed the Ocean Alert was boarded illegally, but Spanish forces have been given permission by a Spanish court to search the ship. Spain does not formally recognise British waters around the Rock which are set at a 3n-mile perimeter. It claims that all waters 12 miles off Spain are Spanish. The seizure of the ship follows Spain’s recent launch of a legal case against Odyssey Marine Exploration for allegedly undertaking illegal activities in Spanish waters. Last May Odyssey Marine Exploration discovered a vast trove of silver and gold from a shipwreck in the Strait of Gibraltar. The treasure, weighing 17 tonnes, was airlifted out to the US on a chartered plane from Gibraltar. A judge in Miami is expected to consider the controversial issue over the coming weeks. - Fairplay Homepage (Used with Permission)

Previous Editions:
Here or click on the label below 'MaritimeMonday'.
.
Posted by Fred Fry at Monday, July 16, 2007