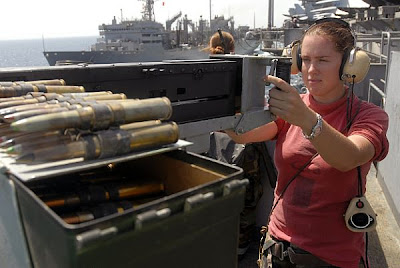 
This Weeks Items:
I cover the disclosure that the Dubai Ports World deal would have been an intelligence bonanza, had the US Congress not scuppered it.

Eagle Speak has an update on the plot by ETA Terrorists to blow up UK ferries departing Spain indicating that this was an active plot. Then there is the Syrian vessel LADY AZZA caught attempting to smuggle explosive materials into Lebanon.

The BBC has "Fifty migrants lost off Canaries"

Pacific Daily News has an interview with the Captain and some Surviving members of the crew of the Chinese-Flag cargo ship HAI TONG NO.7 after they were rescued from two days floating in the Pacific.

Truth about Trade & Technology has posted the Wall Street Journal's must-read story "Activists Choke Growth Of European Shipping". Activists should pick and choose their fights. Trying to save the 'town' of Doel is just idiotic. Nobody in their right mind wants to live next to a nuclear power plant, while surrounded by a container terminal. (From May, 2007.)

Maritime Accident Casebook tells the story of a lifeboat accident on the CAPE KESTREL, noting that the lifeboat is the most dangerous place on a ship. Unfortunate but true.

Sailors, Mariners & Warriors League has Spain's release of the Odyssey treasure ship and troubles for P&O PACIFIC STAR cruiseship which was damaged in a recent storm and has had to discharge its passengers in Vanuatu.

gCaptain has both a bubble chart illustrating the size in number of ships (not the size of the ships) of shipping nations, noting that the open registers (a.k.a. 'Flags of Convenience') are more often than not the big players as well as a graph of ship detentions sorted by flag.

The Globe and Mail has an update on lawsuits filed as a result of the BC Ferry QUEEN OF THE NORTH sinking.

CDR Salamander has France's announcement that they intend to build a second aircraft carrier as part of their attempt to "revive the defenses massacred by the Socialists".

MarEx Newsletter has news of ongoing delays at the Port of Newcastle with ships laying at anchor for a month waiting to load coal.

Nepunus Lex has the US Navy's Aircraft Carrier "distinguished visitor" program. Hmmm. Norfolk is not far away.

TCS Daily has "White House LOST at Sea" (LOST is how detractors refer to the UN's Law of the Sea Treaty, UNCLOS. MY problem with the treaty is that it was created under Soviet influence and as a result contains BS that does not belong in there.)

Fogonazos has a presentation about the Soviet Union's global fleet of spaceflight tracking ships.

BarcePundit has news that ocean levels are not raising as global warmists proclaim. Be sure to click through to the interview with the world's leading sea-level scientist for an explanation why sea levels appear to be rising in certain areas and why there is the bias to blame global warming. (How much do all these new ships being launched contribute to a rise in sea levels?)

A poster on the Maritime Links Discussion Board describes a nighttime encounter with a sailboat and it's sleeping Captain near the Straits of Gibraltar.

The New Zealand Herald has Maersk's confirmation that the NORA MAERSK is not sinking in Waitemata Harbor. It is merely ballasted to permit repair work to the bow thruster in response to many calls from onlookers fearful that the vessel was sinking.

China Economic Review has the Port of Shanghai's 12.5 million TEU throughput for the first half of 2007. That is a lot of crap headed our way.

Shipping Times (UK) confirms that "Latest developments mean UK flag is no flag of convenience" - "UK Ships Register back in Qualship 21 and is top of the Paris MOU 'White List'" Sorry to burst their bubble, but the ITF's definition of a Flag of Convenience has nothing to do with safety:

Where beneficial ownership and control of a vessel is found to lie elsewhere than in the country of the flag the vessel is flying, the vessel is considered as sailing under a flag of convenience. - ITF

Aftenposten (Norway) give us this story:

Dead whale causes a stink: The rotting cadaver of a dead whale was floating in a west coast fjord on Wednesday, sending a foul odor over the area while officials worried it could explode at any time.

There has been lots in the news about the impending invasion of rubber ducks to the UK and The Sun has the possible first find of one.

LiveLeak has video of a NATO UNREP Operation:

Never Sea Land has the story of three ladies making a crossing in the sea of Japan in bathtubs.

Mr. Boat Blog has what appears to be a squid attacking an unlucky fisherman who happened to catch it.

Conference committee agrees to 100% container scanning - Senator Lieberman (D-CT) issued a press release stating that the conference committee on the 9/11 Commission legislation resolved several outstanding issues between the House and Senate versions of the bill intended to implement unfulfilled recommendations of the 9/11 Commission and strengthen the nation’s security against terrorism. With respect to the most contentious issue, the committee agreed to an amendment by Representative Thompson (D-MS) that would establish a five-year deadline for 100% scanning of all containers before they are loaded on ships bound for the United States, but would allow the Secretary of Homeland Security to waive that deadline as necessary. Text of the amended version of the Implementing the 9/11 Commission Recommendations Act of 2007 (H.R. 1) is not yet available.

Commentary: (Dennis Bryant) While I am pleased that Congress is devoting some attention to maritime security, I remain troubled that politics has overtaken reality. The 9/11 Commission never recommended that 100% of containers bound for US ports be scanned prior to loading. Rather, it stated with regard to transportation security: “Hard choices must be made in allocating limited resources. The U.S. government should identify and evaluate the transportation assets that need to be protected, set risk-based priorities for defending them, select the most practical and cost-effective ways of doing so, and then develop a plan, budget, and funding to implement the effort.”

Congress has skipped over the risk-based evaluation, budgeting, and funding. It has proceeded straight to the politically expedient method of directing federal agencies to accomplish an impossible mission, while omitting the funding. Further, it is becoming increasing obvious that the technology behind the scanning effort does not work. Alice in Wonderland had a more coherent story line. (7/19/07). - Dennis Bryant Holland & Knight homepage (Used with Permission)

This is simply an idiotic idea. Keep in mind that not all cargo arrives into the US in containers. Not all of it arrives by ship either.

Cancelled leave led to suicide - DELHI 13 July – Indian ship owners are reported to be deeply concerned by news that senior managers at Shipping Corp of India have been implicated in the suicide of a ship's officer. The officer, Vivek Singh Bisht, is reported to have jumped from his ship in February this year. According to a complaint filed by one of his colleagues, Bisht committed suicide because he had been refused leave from October 2006 to July 2007. The issue has added a new twist to the debate about the worrying shortage of seagoing officers in India. As owners face an unprecedented shortage of officers, crews are denied leave to go home, creating tension among officers. India's National Shipowners' Association has expressed deep concern and says it fears the incident could set a precedent. INSA secretary general SS Kulkarni said the development has deeply troubled member companies. An SCI spokesman said denial of leave is quite common in the industry because of the looming shortage. - Fairplay Homepage (Used with Permission)

Arrests for fraud in rig repair scandal - BRASILIA 13 July – Federal police in Brazil are reported to have arrested 13 people suspected of fraud involving the contracts for the repair of two Petrobras oil platforms, the P-14 and the P-16. Among those arrested under Operation Deepwater are several staff from Petrobras itself as well as executives from the Maua Jurong shipyard. Carlos Alberto Aguiar, the federal prosecutor, says 26 people are, allegedly, involved in passing insider information on to prospective Petrobras contractors. Aguiar said his investigation centres on irregular payments to ghost companies, involved in repairing and constructing the state-owned oil company’s oil platforms. The two contracts under the investigator’s eye were for Reais60M ($32M) and Reais89M. Managers at Maua Jurong and oil-rig equipment maker Iesa allegedly received insider information about Petrobras through contractor Angraporto Offshore Logistica, said the prosecutor. Singapore-based SembCorp Marine, the world’s second biggest oil-rig builder, owns 35% of Niteroi-based Maua Jurong. It is not known what effect, if any, the police raids and arrests will have on the Reais564.5M contract given to Maua Jurong by Transpetro for the building of four product carriers. Yard directors have not responded to Fairplay's questions. The lawyer for four executives at Angraporto Offshore2003 said his clients “deny all the accusations".