Tell a friend about this post if you enjoy what your reading.

This Weeks Photos:
Here are some railship photos.

They operate the railships BALI SEA and BANDA SEA. 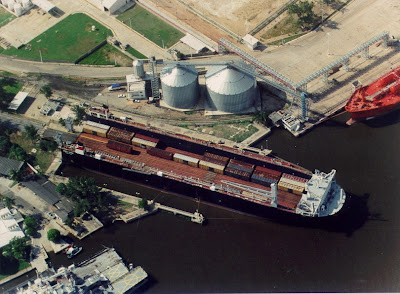 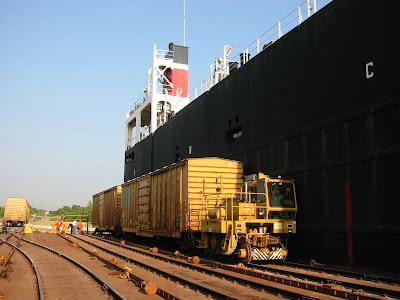 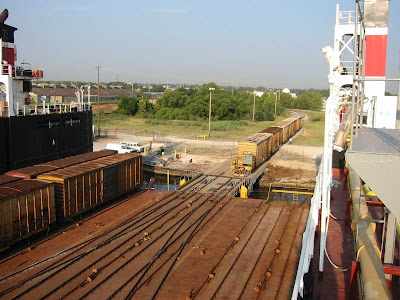 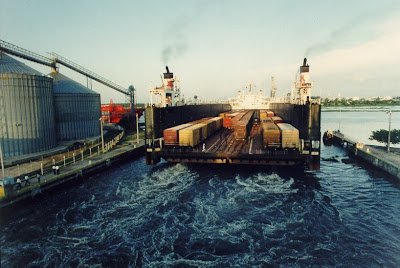 Photos are from the presentation available on their homepage.

Shipping Times (UK) has the ITF's backing of the IMO plan to allow foreign warships to enter Somali waters to fight piracy. The hope is that the Somali Government will now request the UN Security Council to approve the plan. 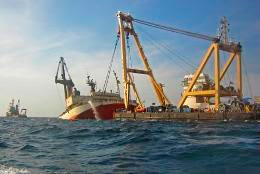 The MSC NAPOLI still remains where it was left, but salvage of the vessel itself continues after full discharge of the cargo was completed in May. It should be refloated any day now.

Cargo Law has the container stack disaster onboard the M/V ITAL FLORIDA.

gCaptain remembers the PIPER ALPHA disaster that took 167 lives. It was the worst offshore oil accident. They also point to other rigs disasters here.

There has been lots in the news about merchant seafarers criticizing how they are treated by the US Coast Guard. Maritime Links provides one perfect example why they are being criticized in the post "Security Farce: Holes in Maritime Security" which includes this jewel:

The ID issue is a trick question. There is no way that a Merchant Marine Officer can get this one right. Take this from Captain Villy Larsen when he asked his Coast Guard boarding party for IDs:

That boarding did not go so well with the Captain ending up in jail for months. That story was covered here:

Scandinavian Shipping Gazette has an interview with an apologetic Captain Villy Larson, the Danish Captain of the DANICA WHITE, who ended up spending 104 days in jail from what appears to be no reason other than the US Coast Guard boarding officer being a jerk. (Note: FFI is highly Pro-Coast Guard!) Summary of the initial incident at Tim's Times (Link redirected to new blog). - Maritime Monday 50

The Stupid Shall be Punished has the arrest of the Disbursing Officer of the USS McCLUSKY who managed to steal $140,000 from the vessel's safe over the course of ten months in pursuit of a Nigeria email scam.

Sailors, Mariners & Warriors League has the detention of the Cyprus-Flag bulk carrier NIKOLAOS P in the UK for being a rustbucket.

Ocra Marine has "EC Allows Sweden To Refund Mariners' Income Tax" (It seems that some Swedes can escape their country's high tax rates, but have to go to sea to do it, or just move away.)

Life at Sea has a post about legendary explorer Captain Jakes Cook.

US Officer Union Master Mates & Pilots has the EU's failed attempt to amend the Facilitation of International Maritime Traffic Convention to permit countries to request crew visa information from arriving ships. This seems to be an end-run around the ILO's Seafarer Identification Convention. This convention is looked after by the IMO. The coverage is a little distorted as the issue appears to be the transmission of data on visas held by crewmembers, while it is portrayed as a requirement for seafarers to have visas. As some countries already require this, it hardly makes sense to think that fighting such a measure at the IMO will prevent other countries from requiring visas if they want to.

Philly.com has a story about the now very busy Aker shipyard in Philadelphia.

Maritime Global Net has Shipping Company Safmarine's response to concerns that it is transporting illegally-felled timber from West Africa to Europe most recently on the SAFMARINE ONNE.

Greenpeace has "Congo timber ship blocked" Wow! The EU seems to really love that illegal old-growth rain forest timber. Why is it that Greenpeace has to step in? Where are the EU Customs Authorities?

Japan Today has the story of a murdered 14 year old Thai girl found on a Japanese-owned Panama-Flag vessel.

Molten Eagle fights against feminization of the US Navy's submarine force.

Neptunus Lex has the protests by local communists over the arrival of the USS NIMITZ in India.

EU Referendum has the debate in the United Kingdom's House of Commons over whether to fund the EU's Galileo GPS System. As you can read, the arguments for going forward are not very strong, especially considering that the US provides GPS already for free. (Maybe the EU can sue the US in the World Trade Organization for 'dumping' GPS on the world below cost.)

EU Referendum also has the EU's attempt once again of creating an EU Coast Guard. I am not sure where that will go as France a couple years back proclaimed that it did not have the funds to create and maintain a US style Coast Guard.

Times-Herald has the upcoming return of WWII 'Mighty Midget' landing craft support ship USS LCS (L) 1-130 from Thailand where it has been in service with the Royal Thai Navy for more than 40 years.

The sad voyage of the SS ST. LOUIS was covered in Maritime Monday 59. Turns out that was not the only passenger ship carrying Jewish refugees to the US. The NY Times has a story on the voyage of the chartered cargo ship QUANZA that carried jewish refugees from Europe. They eventually received visas to enter the US but only after direct intervention by First Lady Eleanor Roosevelt.

Gizmodo has "Jet Kayak is Fast, Dangerous and Awesome".

IMO – proposal for action on piracy off Somalia - The IMO issued a news release stating that the Council endorsed the proposal of IMO Secretary-General Efthimios E. Mitropoulos that UN Secretary-General Ban Ki-moon be requested to bring, once again, the piracy situation off Somalia to the attention of the Security Council, so that it may request the Transitional Federal Government of Somalia to take appropriate action, including consenting to ships entering its territorial waters when engaging in operations against pirates. (6/29/07). - Dennis Bryant Holland & Knight homepage (Used with Permission)

IMO joins migrant taskforce - LONDON 04 July – More than 100,000 migrants cross the Mediterranean Sea each year, according to estimates from the International Centre on Migration Policy Development; at least 10,000 are thought to have died trying to reach Europe's southern shores over the past decade. The plight of these migrants is now to be addressed by the IMO, which has been working with sister UN agencies, including the refugee agency UNHCR, and others concerned with seaborne migration. At the first meeting, the IMO and UNHCR got together with four other bodies – including the UN Office on Drugs and Crime – to seek a co-ordinated approach. There have been two more inter-agency meetings since then, one hosted by the IMO, and another is to be held at the UNHCR later this year. “The issue causes serious concern in relation to the safety of life at sea, which is IMO’s primary objective,” IMO secretary-general Efthimios Mitropoulos said in a statement. LR-Fairplay's security news service Sea Sentinel provides regular updates on migrant movements. - Fairplay Homepage (Used with Permission)