Sean Penn and his Bulletproof Vest

Here we have Sean Penn, trying to prove how easy it is to save people, nearly becoming a victim himself in the process: 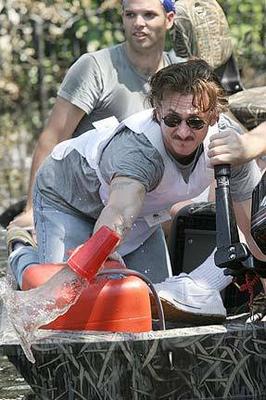 US actor Sean Penn bales water out of a boat with a plastic cup as he and members of his entourage make an attempt to rescue stranded people in New Orleans. Efforts by Penn to aid New Orleans victims stranded by Hurricane Katrina foundered badly Sunday, when the boat he was piloting to launch a rescue attempt sprang a leak. Penn had planned to rescue children waylaid by Katrina's flood waters, but apparently forgot to plug a hole in the bottom of the vessel, which began taking water within seconds of its launch(AFP/Nicholas Kamm)(Yahoo News Link)

The hand in the picture belongs to the helmsman. There are at least three people in this skiff. You can see the whole boat in the Getty pictures. (I think the helsman abandoned ship because in the picture of Penn rowing, he is not in the boat. They did not need him as they could not get the boat's motor started.)

Now Mr. Penn is the only person I know who has a custom white bulletproof vest. Strange as that sounds, this is not the first thought that popped into my mind. What I did notice was that, for some reason, the other two in the boat ARE NOT wearing bulletproof vests.

Did Mr. Penn expect that he would be the only one that maniacs might want to take a shot at? Did he really expect that he might be recognized by a gunman taking shots at him from a distance? Did he think that he was a target because of his fame, and that his boatmates were not at risk? If this is the case, then Mr. Penn is a jerk for thinking that there was a real risk, got himself a bulletproof vest but was too cheap to buy his assistants a vest for themselves. If this is what he believed, then he should have stayed ashore and provided support from there, instead of risking his boatmates.

Of course he could have offered them vests and they declined because there was no way that they would go out there if there was any risk to themselves and knew that the biggest risk for them was Mr. Penn himself. This however brings into question what Mr. Penn thought he was boating into.

Or perhaps he was simply handed the vest by his publisist, photographer, whoever. If that is the case, then that person should be fired because their wardrobe suggestion makes Mr. Penn look more idiotic than getting into a sinking boat to rescue people who have been drowning for a week.

Now if I was a maniac with a high-power rifle and I was taking aim on a boat with three guys in it, and one of them was wearing a vest, just who would I shot at?

None of them. I would pop a couple rounds through the hull. (Penn's boat did come pre-holed)

I do not think that bulletproof vests are approved floatation devices.

My suggestion to Mr Penn:

Donate to the Red Cross: 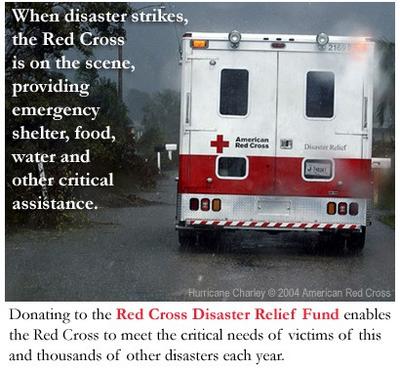