Here is one of the vessel in better days: 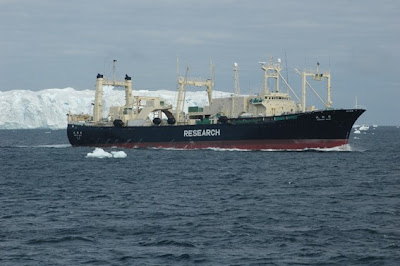 Here are some photos after the fire from two weeks ago: 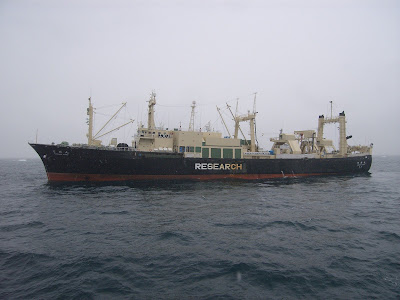 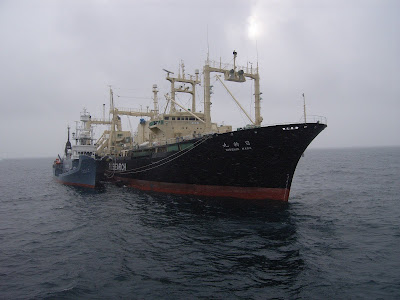 More photos and video at the Institute of Cetacean Research.

ABC News Online has the latest noting that the ship may not be returning home as assumed. (The vessel is needed if whaling is to continue.)

Sea Shepherd notes its return to Australia without difficulties, despite the FARLEY MOWAT arriving without a 'flag'. They also note that they intend to retire the vessel, asking Australia for permission to keep the ship there permenantly.

Eagle Speak has news and photos (of the ships sporting grey and not CG White) that the US Coast Guard will hold onto three Cyclone Class Patrol Ships instead of turning them back over to the Navy in 2008 as originally planned.

Nation's Port Commons has coverage of US Customs clarification of Cargo Security Myths.

EITB24 has the smoking cargo of fertilizer on the Netherlands-Flag OSTEDIJK. La Nueva Espana has stunning photos of the vessel spewing smoke just offshore.

Reuters has the news of Spain and Mauritania refusing to accept a disabled ship with approximately 400 suspected illegal aliens. The vessel is currently being tended to by the Spanish Coast Guard, which Mauritania claims towed it out of Spanish Territory and into theirs. (Now why would they do that?)

Shipping Times covers the hijacking of the UN chartered aid vessel MV ROSEN, which is the fourth hijacking of this type for the same shipping company.

Military.com has the resupply of McMurdo Station in Antarctica by the MV American Tern and tanker USNS PAUL BUCK which were escorted by US Coast Guard Icebreaker POLAR SEA and Swedish Icebreaker ODEN.

Monsters and Critics has the sinking of the Norway-Flag OCEAN CAROLINE and the rescue of the crew by Polish Rescue Services.

Greenpeace UK notes (link fixed) that its vessel, the ARCTIC SUNRISE, has been boarded by military police arresting at least 18, and most likely seizing the vessel as well. It was to be expected when you sail into a restricted zone. Maybe they mis-understood their initial 'reception':

Written by Louise, Greenpeace campaigner, aboard the Arctic Sunrise - Wow. Well it’s now 2.50pm and around seven hours after we set sail. We are still here, right up against the pontoons that surround the Faslane nuclear weapons base – and just some 150 metres away a Trident submarine is sitting there… I keep staring at it… It’s a large beast but it’s still weird to think that something of that size can carry enough nuclear missiles to wipe out hundreds of thousand of people at the touch of a button…

It’s been a mad old morning. As we left Greenock and steamed towards the base - even though I have total faith in our crew onboard - I thought, “there’s no way we are going to be able to blockade that base”. We’ve been sitting around the corner in Greenock for days, on a Greenpeace ship with NO NEW NUCLEAR WEAPONS written down the side, so I was guessing the base would be more than prepared for us. But no, for ages just one police launch and one police inflatable (with one man onboard) was all we encountered. They must have been on a coffee break. - Greenpeace

In a related note, Sailors, Mariners & Warriors League has news of Iran's refusal to permit GreenPeace's RAINBOW WARRIOR to enter the Port of Bushehr to present alternatives to nuclear power to the 'People of Iran'. Since when does Government refusal stop Greenpeace? This is a group where getting arresting is one of the goals of their protests. What a better statement to make than to be arrested by the Iranians. Then again, perhaps they are not that stupid. (Watch next weeks news prove me wrong.) That is why they stick to harassing the US, UK, Japan, Australia, etc....

Helsingin Sanomat documents how while the Finns might be technologically advanced, they still have something to learn when it turns out that every Maritime Monday reader knew of the upcoming tests of the Russian Nuclear icebreaker 50 YEARS OF VICTORY, but they did not. Seems that the Russians forgot to tell them as they should have according to an existing agreement. 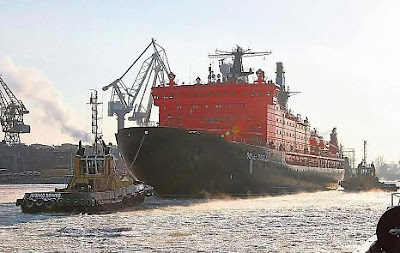 Marex Newsletter has the US Maritime Administration renaming Short Sea Shipping to America's Marine Highway as part of an initiative to push the program forward.

NOAA News Online has news of a Tsunami Warning Partnership with Australia's Bureau of Meteorology. (Go here for a diagram of how the offshore buoys work.)

Cruise Bruise has the fire that gutted the Indonesian ferry LEVINA 1 that killed at least 16.

The Pilot Boat has 'Fatigue Prevention'.

EU Referendum reminds us of the Sherman DD tank which was fitted with a skirt to permit it to swim ashore during D-Day and of the 50th anniversary of the death of Major-General Percy Hobart, who was in charge of the unit that came up with this and many other creative war-fighting machinery.

Ahoy Cargo has the protest by L-1 Identity Solutions over the awarding of the TWIC Contact to Lockheed Martin. (I would prefer to protest the awarding of a TWIC Contract to any company. TWIC is broken. Let the ports handle Port Security.)

O'Reilly Radar has a photo and a story why a town in the UK is putting up signs to prevent truckers from using unsuitable roads that are being suggested by GPS navigators.

York Press (UK) has the defense of sending rubbish to China for recycling, basically being that the initial product that resulted in the waste came from there. (Closed loop recycling.)

Heard through the bubbles repairs an underwater hole in a ship's rudder.

UK – MSC NAPOLI - update - The UK Maritime and Coastguard Agency (MCA) issued an updated status report concerning the MSC NAPOLI. The list of the ship has been reduced to 8 degrees, easing the response operations. Recovery of the remaining oil in the ship is progressing well. Ten containers were lost overboard during bad weather last week, but none contained dangerous goods. 553 containers have been removed from the ship and 293 containers remain on deck. All of the beached containers have been removed. (2/19/07). - Dennis Bryant

Dan Bryan has an account at Flickr where he has a great collection of the MSC NAPOLI cleanup both at the vessel and ashore. 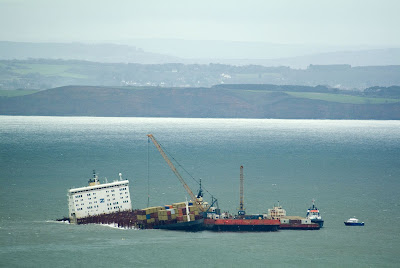 As you can see, most of the above-deck containers have been removed. However, the holds are still full of cargo, and water.

Korea seeks to fill seafarer shortfall - SINGAPORE - 22 February – South Korea is facing an acute shortage of seafarers, caused by a rapid rise in fleets coupled with the attractions of other maritime sectors. Foreign seafarers are to be recruited to meet the shortfall. The Korea Shipowners’ Association expects an annual increase in the number of vessels in member companies' fleets of about 60 ships. Harsh working conditions at sea - despite monthly salaries averaging $2,500 for ratings on ocean-going vessels - is another reason, a source told Fairplay. The problem is exacerbated by the attractions of employment in other sectors, including the shipbuilding sector where opportunities for young people are increasing. However, the supply of engineers is not acute as they average salaries of more than $3,000 a month. Currently, one foreign officer and seven ratings are allowed per ship based on an agreement between management and companies' unions representatives; KSA now plans to discuss the expansion of the number of foreign officers and ratings to three officers and eight ratings during the first half this year. - Fairplay Homepage