This Weeks Photo:
Go here for a slideshow of previous Maritime Monday photos with some others thrown in.

Update: Here it is

The LA Times has this week's must-read: "This repo man drives off with ocean freighters"

Eagle Speak has the US Coast Guard's Patrol Boat shortage. 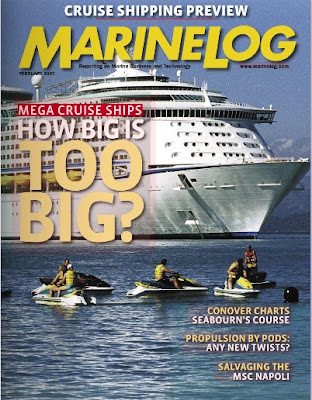 Sailors, Mariners & Warriors League has the 101 year-old Great Lakes Cement transport ship ST. MARYS CHALLENGER. As the story points out, this vessel was built six years before the TITANIC.

Rigzone has news of International Oil Companies (including China Petroleum & Chemical Corp, or Sinopec, Norway's Statoil ASA, Royal Dutch Shell PLC, Italy's Eni SpA, Total SA, Russia's Lukoil and Austria's OMV AG) Investigating Iran's offer to invest in their oil reserves, despite the risk of US sanctions if they do so.

Aftenposten (Norway) has the discovery of a new oil field in the Barents Sea.

Alaska slams Washington state tax - SEATTLE 26 February – Legislators in Alaska last week passed a resolution slamming a proposed $100 fee on all 40-ft containers and a $50 fee on all 20-ft containers imported or exported from the State of Washington. The resolution, which passed unanimously, said the proposed fee would have a "negative impact … on the people and economy of this state." The fee is being promoted by Washington State senator Mary Margaret Haugen. The funds collected would be used to improve transport infrastructure within the state. Projects that could receive funding include increasing the height of Stampede Pass, a railway pass through the Rocky Mountains; improvements to a state highway and a planned connector between two other major roads. If the proposal passes, it would add an estimated $40-$50M a year to Alaska's transport bill. About 95% of goods entering Alaska arrive by sea-borne container with the bulk of those containers shipped from the State of Washington ports of Tacoma and Seattle. The proposed tax is also being opposed by several shipping organisations within the State of Washington. - Fairplay Homepage

Funny, Alaska had no problem approving a $50 per head tax on cruise line passengers a couple months ago. (See: Alaska: All Your Taxes Are Belongs To Us.)

Previous Editions:
Here or click on the label below 'MaritimeMonday'.
-