You can find Maritime Monday 2 here.
UPDATE: Senator John McCain will be the keynote speaker at the graduation of the US Merchant Marine Academy's Class of 2007 on June 18th.

This Weeks Photos:
These are photos of the Ceres Paragon Terminal.

Take a look at this first photo. The interesting part is that they are working at least three adjacent hatches.

To be able to do this, they had to put container cranes on both sides of the vessel. You see, the cranes are wider than the hatches, in order to permit the containers as well as hatch covers and oversized cargo to pass through the crane's legs. This means that in general, you must have one hatch separation between working hatches.

Since you are paying your longshoremen by the hour, you want to make sure that when a crane is finished with a hatch, that you can move the crane to the next hatch to be worked. This is where it comes in handy to have a good stow and discharge plan. (And no, it's not helpful to have a classmate from school in the previous port (Houston) tossing the last 20-30 containers wherever the cranes happen to be at the end of cargo operations just to keep his productivity numbers up. When Chief Mate's first question when you board is "Do you know xxxx xxxx? That guy is a real assxxxx." You know its not going to be a good day.)
An additional benefit of using terminal space on both sides of the vessel is that you reduce traffic alongside the vessel which can also benefit production. 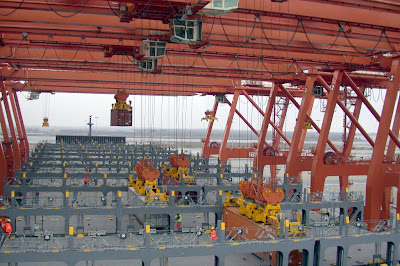 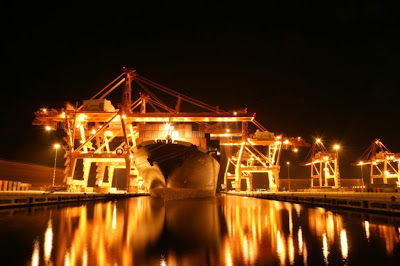 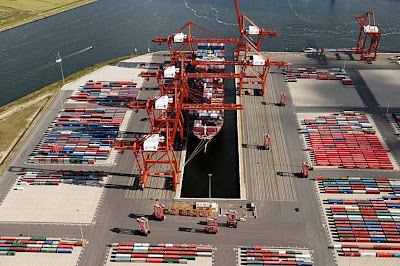 More photos of the terminal can be found here.

This terminal is located in the Port of Amsterdam. As you all know, the big container port in the Netherlands is Rotterdam. This has been a problem for the terminal in getting business, as can be seen by the bottom photo, which is clearly nowhere near capacity.

Ceres is owned by NYK.

Eagle Speak has a last minute delay to what should have been the first day of enrollment for Transportation Worker Identity Cards (TWIC) at the Port of Wilmington, Delaware. Not surprising at all really. There was US Senate testimony given in May, 2006 about TWIC Problems as observed in the Port of Wilmington. Check out Maritime Monday 10 for a summary as reported back then.

Sailors, Mariners & Warriors League has the sinking of the M/V UNICORN ACE in the Philippines.

The Peninsula (Qatar) has an eyewitness account of the kidnapping of 15 British Naval Sailors and Marines noting that the vessel that they had just inspected was anchored in Iraqi waters and it was the Iranians who went into Iraqi Territory to capture them. The Independent (UK) has coverage of what appears to be a failure of UK forces to adjust protection levels after being warned by the US of possible retaliation by Iran for the capture of Iranians in Iraq. This incident is bad enough in itself, but combined with the message the US House of Representatives just sent last week pushing to hobble the US Military in the Middle East is hardly going to do anything but encourage Iran to target the US and UK. (Keep in mind that US cargo ships transit in the shipping lanes off the Iranian Coast and could be seized and charged with spying just as easily as just happened to the British.)

UPDATE: EU Referendum has analysis and questions over how the kidnapping of the British boarding team might happened, noting that the Royal Navy has only one Frigate in the area, making it basically impossible to have a larger military asset watch the backs of all their small boats. (With photos for illustration.) So who was watching their backs?

The Stupid Shall Be Punished has some details concerning the possible cause of an explosion on the HMS TIRELESS while under the Arctic ice.

Daily News (Sri Lanka) has a serious look at the terror threat to India's vast coastline.

Tim at Tims Times signs off his ship in Sweden and gets reacquainted with life ashore. Be sure to take a look into his archives here where he gives you a little insight into sailors.

The Japan Times has suspected smuggled clams in violation of sanctions against North Korea.

The Hamilton Spectator has a story on the Canadian Coast Guard Icebreaker GRIFFON in Lake Erie.

Victoria News has a story about British Columbia, Canada pilots.

Forbes has Waleed Mohammed bin Attash's confession to Planning the USS COLE bombing. That should be enough for a military tribunal to convict and sentence him to death, preferably by hanging. That is what General George Washington would have had done to him.

The Globe and Mail has one year after the sinking of the QUEEN OF THE NORTH ferry in Canada.

Marex Newsletter has coverage of the Panama Canal expansion.

Cargo Law has the vessel named TITAN URANUS. (You are either going to understand this one or your not. If you need help, say the name out loud. If you still don't get it, say it out loud to others around you.)

The Pilot Boat has 'Visual Aids to Navigation'.

Fogonazos has coverage including video of the research platform R/P FLIP, "the only ship in the world having the ability to flip from a horizontal position to a vertical position while at sea".

Navy Newsstand has video of the new USS MONITOR Exhibit at the Mariners Museum in Hampton Roads, Va.

Saanich News has the news that the Canadian navy frigate HMCS WINNIPEG was one of the vessels targeted by USS BENFOLD sailor Hassan Abujihaad (Note: Abu - Jihad). KTAR.com has some of the emails he sent from his own US Navy email address while onboard the vessel as well as an email describing the task force's mission and weaknesses in defense. General Washington would have had him hanged as well. We are extremely lucky that he did not try to sabotage the vessel from within.

Tanker company sentenced – whistleblowers rewarded - The US Department of Justice issued a news release stating that a tanker company was sentenced, in accordance with its guilty plea, to pay $27 million for discharge of oily waste water, conspiracy, false statements, and obstruction of justice. In addition, the company will be on probation for three years and must institute a court-monitored environmental compliance program. In approving the sentence, the court authorized awards of $437,500 each to twelve current and former company employees for their role in disclosing the offenses. (3/21/07). - Dennis Bryant Holland & Knight homepage (Used with Permission)

ABS chief angered by order frenzy - STAMFORD - 20 March – American Bureau of Shipping president Christopher Wiernicki has chastised shipowners for what he termed choosing "short-term parochial interests" over the industry’s pressing image problem. Speaking to the Connecticut Maritime Association yesterday, Wiernicki noted that IACS members spent four years and tens of millions of dollars developing common structural rules (CSR) for tankers and bulker carriers. But just before CSR took effect from 1 April 2006, there was a “frenzied period of ordering by shipowners rushing to beat implementation”. As Wiernicki put it: “Let’s get this straight: the industry repeatedly complained that existing rules did not deliver sufficiently robust ships and governments were expressing concerns about structural adequacy and so shipowners rushed out to order a fleet of ships that will be with us for the next 25 years or more. Where’s the credibility? Where’s the leadership?” The same “rush to order” mentality arose just prior to the deadline for new ballast coating requirements adopted as part of CSR in December 2006, he added. An opportunity was lost to build respect and credibility with regulators, he lamented. "This industry sent a very clear message to the IMO and the bureaucrats in Brussels and the legislators in Washington that it's incapable of effective self-regulation." - Fairplay Homepage (Used with Permission)

Bishop blasts poaching culture - STAMFORD - 22 March - Rampant poaching continues to exacerbate the growing shortfall of qualified officers, the Connecticut Maritime Association was told yesterday. Bob Bishop, chief executive of ship manager V.Ships, hit out at operators who are just paying officers a few thousand more. As a result of such poaching, some officers will be "earning more than the presidents and prime ministers of their countries," said Bishop, meaning that "they don't need to stay at sea as long and can retire ashore and afford to buy a hotel, so they're lost to the industry forever." V.Ships' goal is to increase its seafarer base from 23,500 to 60,000 by 2010 via significant increases in recruitment centres and other measures. "China may have a lot of people, but there's a language issue and when someone in China does learn English, they can do very well in Shanghai and don't need to work at sea." America is showing more promise because "the increasing unification in the cost of seafarers worldwide is opening up the possibility of greater utilisation of US seafarers". - Fairplay Homepage (Used with Permission)

Sounds like Mr. Bishop is a little pissed of that he can't pay seafarers peanuts for wages any longer. As for 'other measures', how about paying your seafarers more money (since the competitors "who are just paying officers a few thousand more.") One reason there is a shortage of seafarers is due to the implementation of the IMO's STCW 95 Convention which set global standards for the Training and Certification of Seafarers. This removed many unqualified/uncertified seafarers. What did not happen was any increase in the training of seafarers to make up for the loss. This combined with a reduced interest in going to sea in some traditional maritime states, such as the UK, is one reason why there has been recent news of deals to employ American Seafarers on foreign-Flag vessels. (The US still has a healthy maritime training infrastructure for both unlicensed and licensed Merchant Mariners.)
Of course, when given a choice and with all other things being equal, a sailor will choose a shipping company that treats it's sailors better. So this makes me wonder if V Ships has other seafarer issues that it needs to address other than low pay.