This Weeks Photos:
Training is expensive in the maritime world. Sure there are simulators, but to get a different perspective there are 'manned models'. After all, you learn when you make mistakes and training is when you are supposed to experiment and practice. Most importantly, nobody is going to let you train on a VLCC Tanker.

There are manned model courses in Poland, France and the US. (Leave a note in the comments if there are more locations.)

The photos below are of the Port Revel Shiphandling Training Center. The photos are by Françoise Massard at marine-marchande.net who has an English summary covering the course. Go to his site where there are many more pictures of the facility and of the training program. 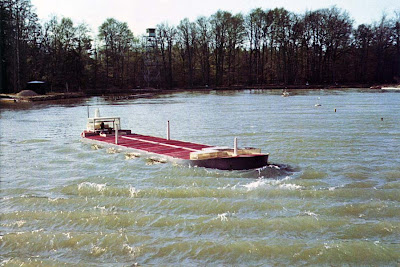 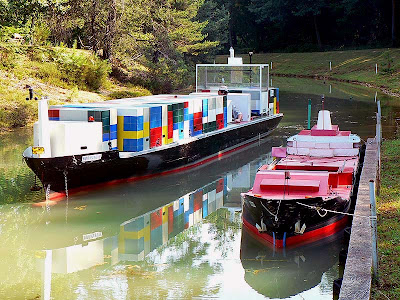 Eagle Speak has coverage of analysis of the possibility of an LNG Vessel Worst-case scenario.

Cargo Law has the recent heavy lift accident on the M/V JUMBO CHALLENGER in the Port of Los Angeles.

Sailors, Mariners & Warriors League has the story of how the Canadian Naval Vessel HMCS FREDERICTON managed to overcome a shortage of cigarettes after it was diverted to Africa without sufficient 'supplies' onboard.

Cars Photos has the best photo coverage of the capsized Grimaldi Lines vessel REPUBLICA DI GENOVA you'll find anywhere on an English-language Blog. (They are from this Belgian site.)

The European Commission issued a press release in December, 2006 declaring that "Forty-five-foot containers can continue circulating on European roads". The press release was required as EU Council Directive 96/53/EC had basically declared the 45 foot container too big, and therefore illegal. However, the 45 foot container becomes acceptable to the EU once the front edges are beveled, which the Germany Company Jost figured out pretty quick, patenting the solution. (Here is a PDF document summarizing the problem and their solution.) 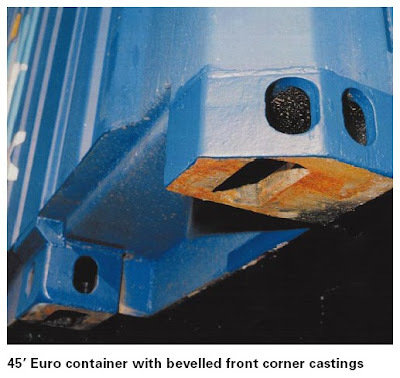 Icelandic Company Samskip issued a press release that they had replaced all their 45 footers with compliant 'Euro Containers.' Since all did not, this Directive surely cost the more compliant-minded European Companies millions, for no good reason.

Marex Newsletter has Legal Action by the widow of a Columbia River pilot who died while on duty.

The Jawa Report has Dubai Port as a transshipment point for stolen 4WD vehicles.

The Pilot Boat has dramatic video from the pilot boat during rough weather. Not only do pilots spend countless hours in weather like this, but they then go and step onto a long rope ladder.

Freaque Waves has video of storm conditions at Cape Horn.

Scandinavian Shipping Gazette has an interview with an apologetic Captain Villy Larson, the Danish Captain of the DANICA WHITE, who ended up spending 104 days in jail from what appears to be no reason other than the US Coast Guard boarding officer being a jerk. (Note: FFI is highly Pro-Coast Guard!) Summary of the initial incident at Tim's Times.

Monsters and Critics has the near collision between the Passenger Ferry SILJA SERENADE and the cargo vessel BALTIC PRIDE after the Pride suffered a complete loss of power while crossing ahead of the Serenade.

Shipping Times (UK) has the news of the four-day tugboat strike in Rotterdam ending due to court order. Something tells me that the tugboat crews are not going to break their backs to clear out the massive backlog that resulted due to the strike. (No word yet on whether they have returned to work yet, just an order to do so.)

African News Dimension has the return of Mercy Ships to Liberia. The Mercy Ships charity homepage is here.

Tims Times has pictures of navigating through the ice in Russia, and what you might find out there.

Navy Newsstand (US) has the President's announcement that he will send the Hospital Ship USNS COMFORT to Latin America on a humanitarian relief mission.

Boating Spectator has US Federal Criminal Charges for the operator of the vessel M/V NORTH PRINCESS and the vessel's Second Engineer for illegal dumping of oily waste water through a 'magic pipe'. (Beware of the 'Magic Pipe' - Other notable dumping cases.)

Site member Thalassa at Shipspotting.com has a great photo of sea smoke taken while piloting the SPAR JADE in Canada.

CDR Salamander has the photo of the naked female 'salute' from the Dutch Navy's RNLMS BLOYS VAN TRESLONG. (Now I could say NSFW, but really the description itself should make that self-evident. Then again, this photo was published on the front page of the news. So click at your own risk.)

EMSA – CleanSeaNet - The European Maritime Safety Agency (EMSA) issued a news release stating that it is launching CleanSeaNet. This service is scheduled to begin operation in April 2007 and will provide analyzed satellite images to EU Member States, enabling them to monitor and detect illegal and accidental discharges of oil into EU waters. (3/2/07). - Dennis Bryant (Homepage)

Senate rejects 100% box scanning - WASHINGTON, DC - 02 March – A push to force scanning of all US-bound containers was beaten back in the US Senate yesterday. As the upper house considers a bill to fully implement suggestions of the 9/11 Commission, New York democrat Chuck Schumer introduced an amendment to mandate the 100% box check. That amendment was debated through most of the day yesterday and then defeated on a 58-38 rollcall vote at early evening. Maine Sen Susan Collins – who was a principal author of the SAFE Ports law that set up pilot projects for container scanning – drove the stake through the amendment’s heart with a motion to table. Maritime interests in Washington had watched the proposal closely, especially after a similar measure for full box scanning was approved by the House of Representatives in its version of the 9/11 bill. But as forecast to Fairplay by World Shipping Council President Chris Koch, the Senate exercised better judgment and rejected the Schumer proposal. Proponents of the concept will have one final chance to insert the controversial language when the House and Senate versions of the bill are reconciled in a conference committee. - Fairplay Homepage

Nice to have someone gather fun and interesting maritime news from all over the globe! I'll be back.

There are also manned model centres in UK at Warsash, and Newcastle, Australia.

The link to the Warsash Manned Model Shiphandling Centre is : http://www.mannedmodel.com

Apologies the correct link to the Warsash Manned Model Shiphandling Centre is : http://www.mannedmodels.com