Welcome to this 1 Year Anniversary Edition of Maritime Monday.

You can find Maritime Monday #1 here.

For those who need a primer, go see Romancing the Road who answers "What's a Merchant Marine?"

This Weeks Photo:
This Week's photo is from the website of Danish Shipping Company Rederiet M.H. Simonsen.

Rederiet M.H. Simonsen is a family owned shipping company operating 7 tankers ranging from 2.000 dwt to 4.500dwt. Our ships are primarily engaged in 2 segments of the north european small tanker market. The majority of the vessels are employed in the transportation of vegetable oils, fats, molasses, waxes, uan and other FOSFA acceptable products. Two units of our fleet MT ORAKOTA and MT ORATECA are futher more dedicated as foodgrade carriers and adheres to the stringiest requirements in our industry. Our latest newbuilding MT ORAHOPE is presently employed on timecharter in the clean petroleum trade. All our tankers are operated by Simonsen CharteringApS. - Profile 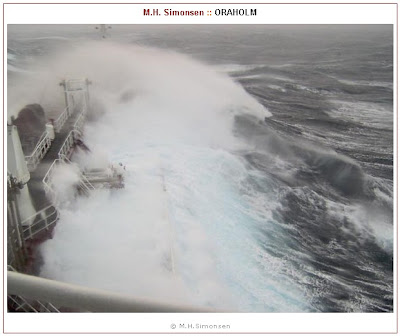 Click on the photo to go to their gallery titled 'Ships at Work'.

This Weeks Items:
Eagle Speak has what the GAO's report on the LNG Terror Threat really said.

Reuters has Mauritania's and Spain's shameful promise not to assist migrants in distress at sea again.

M & C has the deaths of 9 illegal migrants during an attempt to reach Greece via Turkey.

Sailors, Mariners & Warriors League has the rescue of the crew of the AFRODITI S off Greece by the British Frigate HMS MONMOUTH.

Dana Stabenow reports from aboard the US Coast Guard Cutter MUNRO.

Tims Times has photos of Norwegian Fjords. Be sure to read the post as well!

IOL (South Africa) has the story of a Swedish couple whose goods were looted from the wreck of the MSC NAPOLI and their long wait for the return of their goods from those who pilfered their container.

Ocean Navigator Blog has news of the return of the Capn' Navigation Program.

Marex Newsletter has a Security Alert from Tactical Defense Concepts (TDC) concerning the use of ships as weapons. (I have yet to find any more information on this TDC story from last August: Suspected Jihadist Targets US Merchant Vessel)

The Torch (Canada) has "Subs and Arctic sovereignty". Seems that American and British subs spend more time under Arctic Ice than Canada does on the surface, which complicates their claim the area is theirs and not international waters.

The Pilot Boat makes a good point with his photo 'The ship and the sun'.

EU Referendum has an update on the European Union's Galileo (GPS) Satellite Navigation System's growing problems. I agree that this project is probably going to be abandoned. That is, unless they can convince the US to charge a fee for users of their GPS system, or perhaps tax the hell out of GPS users in Europe. (One plan was to use Galileo to track car usage in Europe in order to tax by the Kilometer/mile.)

Road - Satellite navigation will help regulate road use and minimise traffic jams. If all vehicles are fitted with a navigation satellite receiver and a data transmitter, their position can be relayed automatically every few seconds to a central station. This information can then be used in a number of ways to control road usage. It could, [note: will] for example, be used to charge motorists for using a stretch of road, to restrict access to congested roads, or to inform drivers of congestion and suggest alternative, quieter routes. - European Space Agency

I wonder if they are purchasing carbon offsets for this program to make it 'carbon neutral'? Nothing like damaging the environment to install a navigation system where one already exists, all in an attempt to limit global warming due to transportation.

Navy Newsstand has a video highlighting the Merchant Marine and how they contribute greatly to Naval Operations. The video was shot onboard the MV CAROLYN CHOUEST (The Sailors are sometimes also called Civil Service Mariners or CIVMARs due to the Government being either the Employer or 'charterer'). Military Sealift Command, The US Military's Shipping Company, has a story on the CIVMAR Program. More on the CAROLYN CHOEST at MSC's website.

Arctic (at Myspace) has his story of going to a containership to knock ice off the superstructure. Lots of ice. (Note: Contains vulgar language. As it should)

Scotsman.com has a trip to the remote island of St. Helena, where Napoleon was once exiled.

Sisko111 at Youtube has posted this video of the launch of the HOEGH BANGKOK in Croatia.

+
Somebody please pluck Sir Robin Knox-Johnston from his sailboat the SAGA INSURANCE before he hurts himself. You see, the good captain has no concept of the law of gross tonnage, at least that is the feeling I get from reading his blog documenting racing through a shipping lane. (the law was Mentioned in Maritime Monday 5) Even scarier is that he was the first one to sail around the world solo. This time he is racing in the Velux5Oceans solo race. Here is the law, as the US Coast Guard Auxiliary understands it:

Law of Gross Tonnage - The law, which is more common sense then explicitly written in the code, goes like this: “The heavier vessel always has the right-of-way.”

This is based on simple Newtonian physics. Newton’s first law talks about objects in motion stay in motion unless another force is acted upon it. In other words, if a boat is moving a 5 mph east and you were in the vacuum of space, it would never stop traveling east at 5 mph. However, we all know when we stop our engine on our boat, we slow down.

How long it takes to go from 5 mph to zero, depends on wind, and current. Even if there was no wind or current, we’d still slow down, because the water itself provides friction upon the hull of the boat, and that in itself acts as a brake.

We all have, by observation found that the bigger the object, the longer it takes to slow down. Newton’s second law of physics talks about how the amount of force required to move an object is inversely proportional to the mass of the object.

Because if you didn’t move your vessel in less than 60 small seconds, the tug and barge would just run right over you. It would be impossible for the master of the tug to stop, based of the collective mass of both the vessel and the barge, in 1,000 feet.

The law of gross tonnage is un-relenting. It is a fact of life. What also is a fact of life, is that you should not depend on the master of the tug or any other large vessel is able to see you, either visually or on radar. - The United States Coast Guard Auxiliary

He wants to think that the vessels did not see him. Trust me Captain, they saw you. And they were probably betting whether you would get out of the way and busy arguing who was going to have to paint over the scratch marks your boat would have left on their hull once the vessel gets back to port. Anyway, I'm sure they were getting ready to sound the danger signal to encourage you to get the hell out of their way. Really, stay clear of big ships. The least he could have done was try and radio these ships. He should know better. It is no secret that the UK has fined sailboat captains for being stupid in shipping lanes.

ExpectMore.gov has an assesment of the Title XI Loan Program, and rates it 'Moderately Effective'.

Lawfirm Blank Rome has an explanation of the Program.

Germany ramps up training capacity - HAMBURG 14 March – Germany's nautical colleges will raise the number of places by 50% this year with financial support from the country’s ship owners. Federal states Lower Saxony and Bremen will see the highest capacity increases of 100 and 80 college places respectively, while Mecklenburg-Western Pomerania and Schleswig-Holstein will add 40 places each. Hamburg will not resume training after the closure of its nautical department some years back, but it is expected to share in the costs of the capacity additions by the other federal states. The need for German masters and officers has gone up again as the German-controlled fleet continues to grow strongly with more vessels flying the domestic flag in a trade-off for the continuation of the tonnage tax. The German ship owners’ association, whose reflagging campaign was bogged down by the lack of German-speaking masters, has agreed to support the capacity additions with €3M ($4M) over the next three years. - Fairplay Homepage (Used with Permission)

In regards to the MSC article. MSC calls its seagoing employees Mariners and they are technical CIVMARs. That distinquishes them from the jsut plain Mariners who crew MSC chartered or privately owned ships.