This Weeks Photos:
Here are a couple of vessels from Denmark's DFDS:

Freight activities
are operated in DFDS Tor Line. The main customer groups consist of international transport and shipping companies and manufacturers of large quantities of industrial goods whose logistics include a significant element of transport by sea.

As you can see RoRos are big in Northern Europe. RoRos are truly and important part of intermodalism. It does not get much easier than driving the trucks on and off. (Unless of course the driver got wasted in the bar while onboard.) 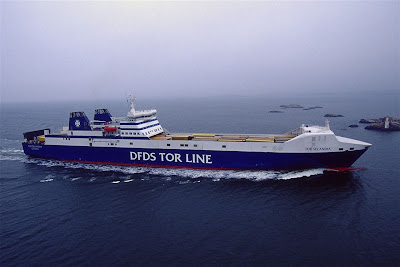 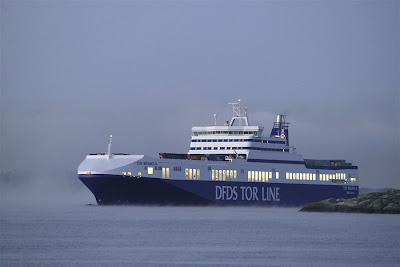 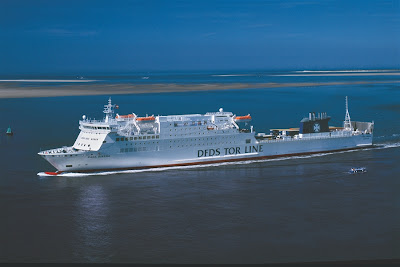 More photos of their fleet here.

Eagle Speak has a story on scanning containers to combat fraud.

Cdr. Salamander has Iran's claim to have 'tagged' a US Warship with the emblem of Iran's Revolutionary Guards. The good CDR dares them to try and do that to his ship. (The claim has been made but so far there is no proof to back it up)

DutchNews.nl has an update on the PROBO KOALA toxic waste dumping scandal. For starters, the owner, Trafigura, has agreed to pay close to $200 million as settlement for the dumping, Amsterdam Port Officials have been arrested and an arrest warrant has been issued for the Captain.

PortWorld has the Port of New York and New Jersey's demands for an $84 million fee in order to obtain its approval of DP World's sale of its US Port operations. (Why wasn't there a demand when the terminals were sold to DP World just a couple months ago?) Eagle Speak has an update to this case where Senators Schumer and Menendez have forced the Port Authority to back down.

Sailors, Mariners & Warriors League has the drowning of 177 migrants from Ethiopia and Somalia after their boat that was headed to Yemen sank. According to the report some who drowned were thrown into the sea from other boats by smugglers to make room for smugglers from the boat that sank.

Scandinavian Shipping Gazette has an editorial on short sea shipping in northern Europe.

The Monitor covers the report issued by Canada's auditor general that declares that Canada's Coast Guard is riddled with incompetence.

Molten Eagle has the result of what happens when you submerge a coffee cup 15,000 feet down in the Pacific Ocean. (On my last vessel we did sampling and a couple of times sent syrofoam cups along with the 'package', although the result was not as dramatic as we did not go as deep.) Anyway, it is worth a look as this was and is an accomplishment and part of American Maritime History.

Sustainable Shipping has Canada's funding of a program to provide shore power to ships in port.

Marex Newsletter has the EU's proposal to criminalize "Environmental Incidents" which will effect the maritime industry and will not be limited to accidents but also to illegal shipments and unlawful trade. (One would think that activities described as 'illegal' and 'unlawful' already have laws to deal with them, but when has that ever stopped the EU...)

Marine Log has ten months of jailtime for Lenny Roman, who thought it was a good idea to hand a fake Coast Guard Master's License to the Coast Guard after he required a tow for his water taxi.

The BBC has the 50th anniversary of the odd John Frum 'Cargo Cult' on the island of Tanna in Vanuatu. Go here for an explanation of cargo cults and here for a summary about John Frum.

Oil Change International has news that French oil company TOTAL knew that the tanker ERIKA was a risk after it come out in court that the tanker did not meet the company's own safety rules.

Greenpeace notes that half of Iceland's whale catch has been left in a dump to rot. (Supposedly the other half is rotting on purpose according to Icelandic traditions) The story also mentions that there are thousands of tons of unsold whale meat in Japan which makes me wonder if the Japanese Government is not whaling due to any demand but simply to maintain their excuse for whaling that it is part of their maritime tradition.

Speaking of waste, Alaska Report notes that the cost to build Alaska's Gravina Island's Bridge to nowhere (not to be confused with Alaska's other bridge to nowhere) has risen by $67 million to close to $400 million. All this to replace a 7 minute ferry trip.

Aftenposten (Norway) has photos covering 'A new Life for Lighthouses.'

The ILO has ten countries listed as ratifying the new Seafarer Identification Convention. Not listed is Russia, whose Duma was reported to have ratified the Convention in November.

For those of you interested the Sea Shepard anti-whaling protests, the ROBERT HUNTER has docked in Melbourne, Australia and has been ordered to inform the authorities of its new flag as its current registration expires today. The unflagged FARLEY MOWAT is approaching Australia and proclaims that it will enter port properly registered, somewhere. (Story at The Age, Australia) Meanwhile the Japanese Whaling vessel NISSHIN MARU was struck by a crippling fire last week, partly fueled by whale oil (How ironic is that?) The disabled vessel has offers from Greenpeace and the US Coast Guard to tow it out of the area and today New Zealand, which is responsible for rescue coordination down there has ordered the ship out of the region. (Story at the Times Online)

UK – smoking restrictions on vessels - proposed - The UK Department for Transport issued a news release stating that it is proposing to restrict smoking on sea-going and inland vessels operating in UK waters. The consultation will close on 11 May. Note: Even the Americans haven’t gone this far – yet! (2/14/07). - Dennis Bryant

Hello, someone needs to tell these lawmakers that ships are not just workplaces, they are also a home for the seafarers. When I was at the US Merchant Marine Academy, they came around one day and told everyone to remove all but the most innocent photos of girlfriends and women in general as our rooms were not rooms at all but Government workspaces. And there was a possibility that a woman might be offended by the phototographs. These would be the very same women who would then go into our underwear drawer to make sure we folded our shorts correctly.

Erika Day 3: Total's embarrassing memo - PARIS 14 February – Erika trial Day 3: French energy group Total, charterer of the Erika, has vehemently rejected all accusations made against the company. “Total cannot be held responsible for the state of the ship and in particular its level of corrosion,” defence lawyers argued. However, a document written in 1998 by Bertrand Thouilin, head of the group’s shipping/trading legal department at the time of the accident, has been put forward. Thouilin wrote that “the responsibility of a charterer may be at stake when it comes to the choice of the ship.” Judges commented that such a document “will carry a certain weight in this trial,” to which Thouilin responded that the document was for internal use within Total only and was meant to reinforce vetting procedures. Nevertheless, even if it proves difficult to establish the responsibility of charterer Total in view of existing laws, the 70 civil claimants present at the trial all want Total to be designated as the responsible party. Depending on what the judges decide, this could lead to a change in law whereby cargo owners would join ship owners as responsible for pollution. “Until now the text of laws governing pollution do not provide for charterer responsibility,” one lawyer outside the trial explained. Meanwhile, ship owner Giuseppe Savarese declared that he is now ruined, dashing hopes of civil claimants that the owner should also be liable for the pollution. Class society RINA has asked the court for “international immunity”, rejecting the competency of French jurisdiction in the handling of the case. Finally, the court noted the absence of the ship’s captain, Karun Mathur; it is now thought he will not attend the trial at all. - Fairplay Homepage

Seeing all the trouble that the Captain went through to be released the first time, I don't blame him for not going back. How come none of these cases ever focus on the Chief Engineer who should know the condition of a vessel far better than the Captain. While the Captain is ultimately responsible, he is dependent on his officers to keep him informed of things....

Budget requests need to be more explicitly tied to the accomplishment of performance goals. The program must better demonstrate improved effectiveness from year to year with emphasis on supplementary performance measures identified in the PART. - Gov

ExpectMore.gov has the program assessment summary for the US Merchant Marine Academy, rating the program as 'Moderately Effective'.

The United States Merchant Marine Academy has a clear purpose to produce well-qualified merchant marine officers who are obligated to serve a set number of years in a reserve component of the US Armed Forces and to work in maritime-related employment.

The Academy needs to improve its ability to achieve its performance goals and demonstrate cost effectiveness, particularly in comparison with other programs that have a similar purpose and goals. - gov

The report provides the following numbers:

Does the performance of this program compare favorably to other programs, including government, private, etc., with similar purpose and goals?

Explanation: USMMA produces nearly 80% of the licensed, qualified, obligated merchant mariners appointed each year in the USNR-MMR program. The balance of USNR-MMR accessions come from the six SMA programs.

The average total cost per graduate at the US Coast Guard Academy is $305,000. - gov

For those who are interested, you can find the one assessment that covers the US Military Academy, US Naval Academy, and US Air Force Academy here. (One assessment was done as they are all operated by the Department of Defense.)