The Mercy class of hospital ships are converted San Clemente-class supertankers now used by the United States Navy as floating ambulances. Two of them are used by today's Navy:

They are both maintained by the Military Sealift Command. - Wikipedia

Well they are a little more than 'floating ambulances.' They each have twelve operating rooms where it is possible to perform two surgeries at once, as often wounded suffer from multiple injuries. They are two of the largest facilities of their kind, either afloat or ashore.

Eagle Speak has the fire on the BALTIMAR BOREAS off Australia. Of note is that the vessel was carrying highly explosive ammonium nitrate. (A shipload of ammonium nitrate leveled Texas City, Texas in the '40s.)

The pilot boat has an overview of the extensive training requirements for seagoing officers as required by STCW 95. (I am told that it is these requirements that are partly to 'blame' for the shortage of licensed mariners. Currently the only First-World country still graduating any substantial number of Deck and Engine Officers is the United States, at about 500+ each year.) Imagine going through this sort of training for a driver's license!

Sailors, Mariners & Warriors League has news that investigators have looked into whether sex was taking place on the bridge of the QUEEN OF THE NORTH during the trip in which it grounded and sank.

Marex Newsletter has the death of a harbor pilot who fell into the water while attempting to board the ENERGY ENTERPRISE at the mouth of the Delaware Bay.

Hello Estonia has the EU's approval of 116 million Euros in aid for the extension of Muuga Harbor in Tallinn, Estonia.

Helsingin Sanomat has the grounding (and freeing) of the Greek-Flag supertanker PROPONTIS in the Gulf of Finland. The vessel is carrying '100,000 tonnes of crude oil.'

Professional Mariner has the accident report summary for the Malaysia-Flag bulk carrier SELENDANG AYU which grounded off Unalaska Island in December 2006. The report notes that four out of six of the main engine's cylinders were broken at the time of grounding.

Marine Log has Transpetro's (Petrobras) order of 10 oil tankers to be built at the Atlantico Sul Consortium in Brazil as part of President Lula's plan to revive the country's shipbuilding industry.

Fogonazos has a photo presentation of Heavy Lift ships titled 'Sea Giants'. To which The Stupid Shall Be Punished (How I found Fogonazos) asked a question about one of the photos that appears to have a Russian sub as cargo. (I would have said check Bellona, but one of the commenter's there already did.)

Aftenposten (Norway) has the merger of Domstein Pelagic, Global Fish, Bergen Fiskeindustri and Koralfisk to form the world's leading herring and mackerel processor to be called Norway Pelagic.

Divided We Stand United We Fall has pictures of the "Plague Ship" QEII in San Francisco and points out that norovirus outbreaks on ships are note exactly isolated to the vessel, especially when the ship makes a port call and it's passengers go "spreading their norovirus contaminated tourist dollars all over our fair city" and calling the visit a biological attack. As twisted as it is, she does make a point.

Bellona has the Sea Trials of the world's largest nuclear-powered Icebreaker, 50 YEARS OF VICTORY. Construction was started in 1989, in the Soviet Union, and finally completed 13 years behind schedule. (Making it 60 years 'of victory'.)

Alaska Report has the arrival of the Sea-based Radar platform.

Divester makes its last post as it is shut down by AOL.

Cape Henlopen – pilot missing after fall while boarding ship - The US Coast Guard issued a press release stating that a pilot is missing and presumed drowned after falling while boarding a ship off Cape Henlopen at the mouth of Delaware Bay. A rescue attempt and an extensive search proved fruitless. (2/5/07). - Dennis Bryant

And this most interesting read:

NATO – Guide to Owners and Masters - The North Atlantic Treaty Organization (NATO) issued its Guide to Owners, Operators, Masters and Officers [ATP-2(B), Vol. II]. The purpose of this document is to provide the commercial sector information regarding interaction with naval forces in a military operations area. This document supersedes ATP-2, Vol. II, which should be destroyed. (2/5/07). - Dennis Bryant 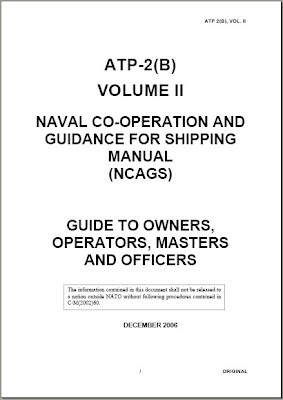 Schroder free, but can't afford appeal - MOBILE 08 February – Capt Wolfgang Schroder enjoyed his breakfast this morning for the first time in four months as a free man – and now he is contemplating his future. Speaking exclusively to Fairplay after his release from jail following his conviction on negligence charges, he said he would like to appeal his conviction but simply doesn’t have the $100,000-150,000 that an appeal would cost. “I simply don’t have the money and I don’t think the company [his employer, Rickmers Redeerei of Germany] would pay,” he lamented. A German national, the former master of the Zim Mexico III now plans to return to his home in England where his wife is set for hip replacement surgery next week. “I have a lot of leave time built up and plan to take some,” he said. “Other than that, I want to get back to work.” Schroder was released from custody yesterday following his sentencing hearing when Chief US District Judge Ginny Granade ignored sentencing guidelines and prosecutor’s requests for a stiff sentence and sentenced Schroder, 59, to “time served”. Chief defence lawyer in the case, Irwin H Schwartz of Seattle, said Granade showed “wisdom, compassion, insight and courage” in her sentencing decision. - Fairplay

Where is the ITF? This is pocket change for them, and a perfect opportunity to actively fight the 'criminalization' of seafarers.