The lift is being done by the Danish pontoon crane SAMSON. 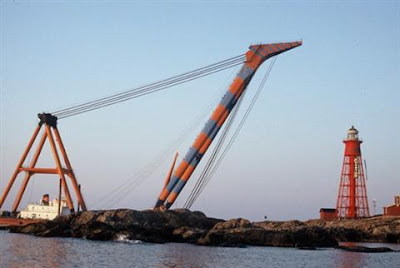 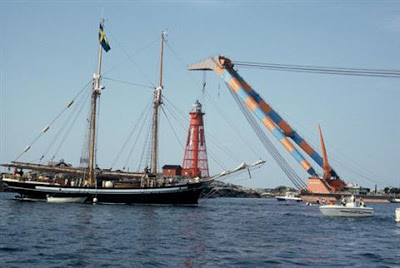 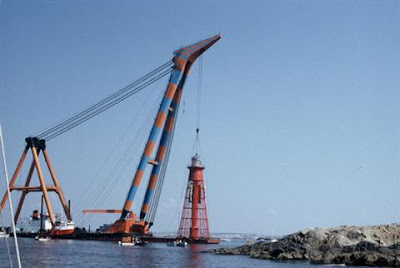 More pictures of the lift here.

Information on the restoration here.

I have video of the rocket liftoff 'anomaly' (explosion) on the Sea Launch ODYSSEY Platform last week.

Irish Sea Shipping has photos of the SEA EXPRESS after it had collided with the Greek-Flagged bulk carrier ALASKA RAINBOW.

Eagle Speak has 'Sunday Ship History: Large Medium Speed RoRos'. (RoRos are a great way to move armies. Winning is all about logistics...)

CDR Salamander has 'Scuttling our Fleet' covering the huge problem with the US Navy's shipbuilding program.

Eagle Speak also covers the issue and lists a number of logical alternatives to the expensive gilded vessels the Navy is currently looking at.

Both these sailors above make the excellent point about the stupidity of building Navy ships that cost $3 BILLION each. It is just plain stupid. Has our Navy really forgotten lessons learned at Pearl Harbor?

The Baltic Times has the Swedish Government's plan to release all video taken of the MV ESTONIA wreck as well as a preliminary report by Swedish scientists that highlight a number of errors in the official report, which only lends further credence to the calls for a new independent inquiry. There is also the suggestion that Sweden will lift the 'oath of silence' they had the divers take so that they can speak about what they observed.

One Free Korea covers US Congress Representative John Salazar's (D-Colorado) proposed House Resolution that calls for the return of the U.S.S. Pueblo which was seized by North Korea in 1968. The official USS PUEBLO website is here. Recent pictures of the ship as a tourist attraction in North Korea are here.

Marine Log has printed a must-read letter from an American Merchant Marine Officer justifiably criticizing the treatment of seafarers in US port facilities, including American seafarers:

Port Security is out of hand; There is no excuse for this type of treatment. As Gaugers, inspectors, pilots and line handlers come and go freely, American mariners can't walk into or out of a facility - Marine Log reader

Did you go read it?

Cargo Law has a summary and pictures of the MSC NAPOLI disaster in the UK including a summary of actions taken concerning the rampant looting that was going on.

Hello Estonia has the Isle-of Man tanker WESERSTERN running aground near Tallinn, Estonia.

Stuff.co.nz has 'Disaster awaits in Antarctica' covering the grounding of the MS NORDKAPP in Antarctica and the upcoming trip of the GRAND PRINCESS to the region. (GRAND PRINCESS's trip was covered in Maritime Monday 27)

MarEx Newsletter has MARAD's approval of the Neptune LNG offshore delivery project for Massachusetts. The project will also provide seagoing jobs for American Merchant Mariners on the Foreign-Flag Suez Energy LNG vessels that will call at the terminal.

Helsingin Sanomat has Swedish fishing trawlers caught by the Finnish Coast Guard illegally inside game preserves for Baltic herring in the independent province of Åland.

It Shines for all has a must-see video of French Marines landing in Lebanon. Watching it reminds me of one quote from Apocalypse Now "Don't get out of the boat!" (This is a perfect example of why you train.)

Aftenposten (Norway) has a story and photos of an encounter with killer whales in a Norweigen Sognefjord, in January.

Professional Mariner has an interview with Gene Pelland, who is Billy Joel's fleet Captain.

The Stupid Shall Be Punished has a photo of the ice-covered submarine USS Philadelphia (SSN 690) after a recent mooring in Groton, CT. (We used to think it was funny to turn on the yachts sonar whenever we saw a surfaced sub while transiting Eastern Long Island Sound.)

The Pilot Boat has photos of the FPSO BRAZIL.

MARAD – foreign-flag crewing practices - The US Maritime Administration (MARAD) published its review of Foreign-Flag Crewing Practices. While crewmembers from 123 nations served on foreign ships calling in US ports, most came from only ten nations, with the Philippines, China, and India being the largest crew providers. (1/29/07). Dennis Bryant

Union fails to halt Queen/North probe - VANCOUVER - 31 January – An attempt by the BC Ferry and Marine Workers’ Union to stop an inquiry by the ferry corporation into the sinking of the Queen of the North has failed. In a judgment issued on Monday, the BC Human Rights Tribunal rejected claims by union president Jacqueline Miller that questioning certain union members about the incident would aggravate or prolong the symptoms of Post Traumatic Stress Disorder (PTSD) suffered by some crew members who were aboard the ferry on the night of the accident. In the complaint ferry officers Karl Lilgert and Keven Hilton were said to have been diagnosed with PTSD and have repeatedly refused to co-operate with the ferry corporation's inquiry into the accident. In her complaint, Miller said the ferry corporation discriminated against some crew members "on the basis of mental stability". In response, tribunal member Toni Beharrell said in her ruling: “There is no information before me that would indicate that the complainant ever provided the respondents with medical information with respect to any specific crew member, and specifically with respect to Messrs. Lilgert and Hilton.” The Queen of the North, carrying 101 passengers and crew, went off course and stuck Gil Island near Prince Rupert at night. Two passengers aboard the ferry remain missing and are presumed dead. Canada’s Transportation Safety Board is continuing to probe the incident. - Fairplay Homepage

I'll have to remember that excuse if I ever need to be interrogated.

Liberia to re-start seafarer training - MONROVIA 02 February – Liberia’s Maritime Training Institute, located near Monrovia, will re-open in March according to a report in The Inquirer newspaper. The Institute is supported by Liberia’s Bureau of Maritime Affairs and the US Merchant Marine Academy. Between them they are revamping the Institute with the intention of increasing the number of Liberian seamen, the report said. The institute plans to run five classes a year with 30-45 students in each. John Morlu, Liberia’s commissioner for maritime affairs, is reported to have praised the interest of the US academy in helping to revamp the Institute. - Fairplay Homepage

The Hong Kong Marine Department has this reminder:

1. Masters, coxswains and persons-in-charge of vessels are hereby reminded to strictly comply with the International Regulations for Preventing Collisions at Sea, 1972 when navigating within Hong Kong waters, especially in poor visibility.

2. All vessels navigating in Hong Kong waters shall do so at a safe speed not exceeding the applicable speed restrictions. Extreme caution should be exercised when navigating in fog, heavy rain or restricted visibility. Appropriate sound signals shall be made in accordance with the International Regulations for Preventing Collisions at Sea, 1972.

4. It should be noted that when radar is used without the benefit of adequate plotting facilities, the traffic information obtained thereof is rather scanty and should be construed accordingly.

5. When the visibility in any part of Hong Kong waters or its approaches is reduced to less than two nautical miles, for example by fog or mist, the Vessel Traffic Centre (Call-sign "MARDEP") will broadcast visibility reports on the major traffic routes and other water areas on V.H.F. Channels 12, 14 and 67. These will be broadcast on each hour until such time the visibility has improved to more than two nautical miles.

7. This notice supersedes Marine Department Notice No.14 of 2006.

Previous Editions:
Here or click on the label below 'MaritimeMonday'.
Posted by Fred Fry at Monday, February 05, 2007