Senator Clinton, the wife of former President Clinton, has come out and made Iraq policy the cornerstone of her 2008 Presidential Campaign.

"I want to be very clear about this: If I had been president in October 2002, I would not have started this war," she said at the Democratic national committee's winter meeting, the first chance for the party's candidates to trade direct political blows.
"If we in Congress don't end this war before January 2009, as president, I will," she said. - News.Com.au

It is kind of early in the year to call this the most self-serving statement of the year, but she has certainly set the bar high for her competitors. Lets just call her policy 'Withdraw now. Cut and Run later.'
This latest position is a contradiction of her vote to give permission to the President to wage war against Iraq. If she would not try to stop the war as a Senator, why should we believe that she would not go to war as President?

To the disappointment of some antiwar liberals in her Democratic base, Clinton, the former first lady, voted in favor of the Iraq war resolution in October 2002.
"Obviously, I've thought about that a lot in the months since," she said. "No, I don't regret giving the president authority because at the time it was in the context of weapons of mass destruction, grave threats to the United States, and clearly, Saddam Hussein had been a real problem for the international community for more than a decade." - CNN

So, as late as 2004 she was still in favor of going to war and still believed that Saddam was a threat back in 2002 when she had voted? So was Saddam a threat or not? All the major powers wer in agreement that Saddam had weapons of Mass Destruction, including France, Russia and even her husband's administration.
I believe that the only real thinking Senator Clinton has done about the Iraq problem is how to keep it from damaging her campaign (and Presidency). Since she cannot change the record of her vote, she now has to promise to withdrawal our troops from Iraq regardless of the situation in 2009. This however, only puts her in lockstep with a number of her party's other Presidential Candidates. (Although she is probably lying about the promise to withdraw. She will find some reason to keep them there if elected.) But to get to the White House, she will first have to immunize her campaign against that vote as far as possible. This is probably why she appears to be making an Iraq withdrawal the cornerstone of her campaign, at least for the moment. This would also explain her recent trip to Iraq. 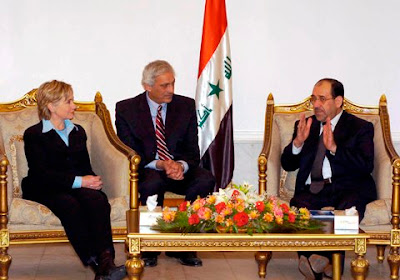 Iraq is where she then threw the current Government and its Prime Minister, Nouri Al-Maliki, under the bus:

She was traveling with U.S. Sen. Evan Bayh, D-Indiana, who opted out of the 2008 race, and Rep. John McHugh, a Republican from upstate New York. They also planned to travel to Afghanistan.
The three, all members of armed services committees, also met with Iraqi Prime Minister Nouri al-Maliki.
"I'm skeptical that the Iraqi government will do what they have promised to do, and that I think is the concern of all of us who have heard this before," she said, referring to earlier security efforts that have failed to stop the sectarian attacks that have been increasing since the Feb. 22 bombing of a Shiite shrine in Samarra. - Boston.com

This is how Senator Clinton supports our Allies. And this was one who really could have used some words of support.
Even worse, is that in recent history, the US has only pulled out unconditionally twice, both with disastrous consequences. First was Vietnam. Then there was Somalia. Since it was her husband who pulled out of Somalia, it is all the more reason for Hillary to avoid doing the same, if only to avoid being compared to her husband as weak on defense.
Oddly enough, within a day of her promise to abandon Iraq, she was talking tough about Iran:

In a speech Thursday night at a Manhattan dinner held by the nation's largest pro-Israel lobbying group, the American Israel Public Affairs Committee, Clinton called Iran a danger to the U.S. and one of Israel's greatest threats.
But the New York senator also said, "We need to use every tool at our disposal, including diplomatic and economic in addition to the threat and use of military force" when dealing with Iran. - Washington Post

So now Iran is a threat and somehow worthy of mentioning the threat of military force as part of the solution. Too bad it is this mere 'threat' of force that our allies the Russians use as an excuse to vote against sanctioning Iran, or any threat for that matter.

Of course after the US does something, then we will find out that we were wrong about Iran and they were not a threat either, or that they only had one nuke and since they had already used it against Israel, they were no longer a threat.
Too bad Senator Clinton almost never means what she says, because if she did, we would not be having this discussion now:

On a different topic, Clinton once again eschewed any interest in the vice presidential slot on the Democratic ticket this year, saying she would turn down Sen. John Kerry, the presumed nominee, if he asked her to be his running mate.
"I'm so happy being senator from New York right now. I love my life. I love my job. I want to see it through," Clinton said. "The people of New York took a chance on me, and I'm well aware of that.
"I said I wouldn't run, and I really mean it. I'm not going to run."
Elected in 2000, Clinton faces re-election in 2006. - CNN (April, 2004)

Sure she really meant it. Like this was some sort of new idea that popped into her head. Maybe she can borrow Senator Kerry's flip-flops.
More here:
Dear Senator Clinton: Soldiers Need a better Rifle

We won the war but lost the peace. Civil war now, and not gonna get better. We did what we came to do, get rid of Saddam and take care of the WMD. The rest was just mission creep.

Time to get very, very lost. Declare victory and vamoose.