This Weeks Photo:
Someone had forwarded these photos to me while I was on active duty (in Washington, DC) during operation Iraqi Freedom. I do not know who took them, so apologies to the photographer who clearly was in the helicopter during unrep / vertrep (vertical replenishment) operations. More vertrep photos at Google Images. The supply vessel is the SS CAPE JOHN. It is my understanding that the Navy made fun of this 'ancient' vessel, after all it was built in 1963. But it did prove its worth during the Gulf War. 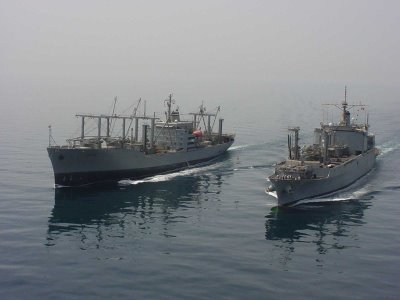 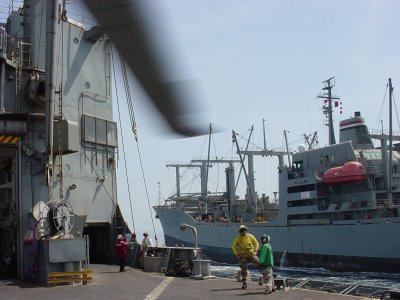 The Transportation Safety Board of Canada has video taken of the QUEEN OF THE NORTH on the bottom as they go into the bridge to retrieve equipment such as the bridge computer, etc.

Diesel Duck at The Monitor has the news of the fire on the Ferry COLUMBIA which runs between Washington State and Alaska.

Rhode Island News has coverage of the fire at a Providence, RI terminal in which the gasoline tanker NORD EUROPA made a narrow escape.

Dean's World has word of what might be the cause of the sinking of the Confederate submarine HUNLEY during the US Civil War.

EagleSpeak is following the evacuation of Americans from Lebanon:

The Travel Bloggers has news of the CROWN PRINCESS listing accident which resulted in something like 10% of the passengers receiving injuries.

Sailors, Mariners & Warriors League has coverage of the theft of the containership M/V UMFALOZI.

My Sea Journey has posted a summary of the rest of his trip. (note for navy people, merchant vessel watches are normally 00-04, 04-08, 08-12 with the same crew standing both morning and afternoon watches with no rotation from day to day.)

Dowbrigade News wonders why don't ships deploy sonar warning signals to warn whales of their approach at the news that the Coast Guard is proposing speed limits for cargo vessels.

Canadian Sailings has the news of Dutch shipping company Nirint Shipping starting a new cargo service from Halifax to Cuba. (They are not the first.)

The World Bank's Private Sector Development Blog discusses some UN findings that warn third-world nations from looking at pipelines and land bridges as ways to improve their own nation as the positive effects may be limited. The report uses the Panama Canal as a guide, where it notes that the US benefited most from it's construction. (That's Your tax money at work.)

The Torch is concerned about the deterioration of the Canadian Coast Guard.

The Providence Journal has news of home brewing of beer at the US Coast Guard Academy using Government funds.

Take a look inside the bridge of the MS CLASEN RICKMERS.