Lebanon was a Catastrophe before Israel Attacked

The global community seems to be concerned about the damage that Israel is doing to Lebanon in response to the kidnapping of two of it's soldiers. Prime Minister Tony Blair is the latest to comment, calling the resulting damage on the ground a catastrophe.

British Prime Minister Tony Blair on Monday afternoon defined what is taking place in Lebanon as a "catastrophe." According to Blair, the situation is harming the state and weakening democracy.

He said he hoped a peace plan for Lebanon can emerge within days that could lead to a cessation of hostilities, but said details need to be worked out for an international force before a ceasefire could be declared that would hold on both sides.

The first thought that comes to my mind is that Lebanon was a catastrophe well before this latest violence. After all the whole lower third of the country was controlled by a terrorist organization. It was not the Lebanese military that was manning the border with Israel, it was the terrorist group Hezbollah that was there. Hezbollah's 'soldiers' are not being paid by the Lebanese Government nor is it the Lebanese Government that is supplying them with weapons. Hezbollah also has no accountability back to the Government for it's actions.
They however can cause a great deal of trouble for the country that they occupy as we can all see. If these recent events are anything, they are a clear confirmation that 'CONTAINMENT' is a strategy that just does not work. At it's best, it only serves to reduce the level of violence between two parties. At it's worse, you get the situation we have now. Hezbollah was arming itself and conducting operations against Israel while under the protection of 'containment'. Along with Iraq, we have two clear cases where other Governments are more than willing to help regimes circumvent containment. After all, just how does a terrorist organization obtain heavy weapons? The missiles that Hezbollah is firing against Israel are not 'small arms and light weapons' as defined by the UN. They are military weapons that never should have gotten into the hands of those using them now.
In a story that ran on the front page of CNN.com, Cal Perry writes about child victims as part of the cost of war. Of course it is terrible to have ANY children suffer for war or for any reason, but why the sudden concern? 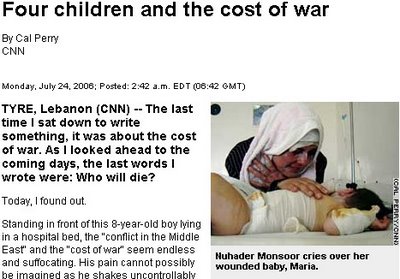 At least this reporter took the time to comment that there are children on the Israeli side suffering as well.

Today, as I finish I am sitting in the same spot and the shells are still falling. Hezbollah rockets are firing toward northern Israel. I can imagine another reporter, in another flak jacket, standing over an 8-year old Israeli boy. - CNN

We have CNN, other reporters, the UN, the EU, and others (Like France and Russia) shedding tears and yelling (mostly in one direction) over relatively few casualties. Sure there are the two soldiers who were captured, but how often do you hear the press mention the eight other soldiers of their unit who were killed in the process of kidnapping the two? So this is not any 'ordinary' kidnapping since the kidnappers are also murderers. In this conflict we are talking about a couple hundred victims, with one side attempting to target their strikes to limit civilian casualties and the other side targeting to maximize them.
All this over a couple hundred casualties. Have these people heard of the crises in The Sudan, Zimbabwe, and North Korea? In these other conflicts we are talking about tens of thousands of children suffering and dying without a care from all these talking heads. Take this horrific and graphic story out of North Korea of how they treat babies there:

Today the Soviet Union is gone, but the communist system lives on in a few places. The glimpse we have into North Korea's delivery rooms is into those at detention centers for political prisoners, as described to Marie Claire magazine in 2002 by Lee Young Suk, a 65-year-old grandmother who was deported back to North Korea after she defected to China. At a detention center in South Sinuiju province, Lee Young was assigned to help deliver babies of other prisoners.

When she delivered the baby of the first woman under her care and reached for a blanket, a guard stopped her: "You crazy hag, are you out of your mind? What are you doing with the baby? Just put it in the box!" He grabbed the baby by a leg and dumped him into a wooden box that was sitting on the floor. He hit Lee Young's arm with a leather strap.

"North Korea is short of food already," the chief medical officer explained. "Why do we have to feed the offspring of foreign fathers? Since China is an open country, they could even be babies of American sperm, so then we'd be feeding Americans."

The procedure was as follows: Once the box was filled with infants, it would be taken to the mountains and buried. Most of the babies would die within four days, but Lee Young recalled two particularly healthy ones who took longer, moving their heads left to right, opening and closing their eyes and making froglike croaks. Their skin turned yellow and their lips blue until the medical officer finally stabbed them through the skull. Lee Young was reassigned when her heart weakened from what she was witnessing. She eventually bribed her way out of prison and into South Korea. - Opinion Journal

Sorry I have no pictures to go with the story as the MSM (mainstream media) does not consider these human rights crimes as newsworthy. At least not yet. You see, at some point, North Korea will collapse and then the talking heads will gain access to this 'catastrophe' that until that day was ignored by CNN, other reporters, the UN, the EU, and others (Like France and Russia). Most likely because it is North Korea killing it's own and not President Bush. As Rightwing Nuthouse points out, "BDS GOES GLOBAL".

Just imagine the horror and global outcry if a US airstrike took out a couple hundred North Koreans at a secret nuclear site. The US would probably need to nuke North Korea to get anywhere near the body count that North Korea's own Government has amassed. Oh hell, take Nobel Peace Prize winner talking head Betty Williams:

Campaigning on the rights of young people at the Earth Dialogues forum, being held in Brisbane, Ms Williams spoke passionately about the deaths of innocent children during wartime, particularly in the Middle East, and lambasted Mr Bush.

"I have a very hard time with this word 'non-violence', because I don't believe that I am non-violent," said Ms Williams, 64.

"Right now, I would love to kill George Bush." Her young audience at the Brisbane City Hall clapped and cheered.

"I don't know how I ever got a Nobel Peace Prize, because when I see children die the anger in me is just beyond belief. It's our duty as human beings, whatever age we are, to become the protectors of human life." - The Australian

Gee, that's a pretty strong opinion and President Bush hasn't yet killed any North Korean children. Come to think of it, neither he nor the US is behind the attacks in Lebanon, it's Israel. And it was not Israel who started this latest conflict; it was terrorists who were operating under the safety of the Government of Lebanon. (Not entirely the Government's choice, but that is a different issue.)

Funny thing is, the only people in the US news for even threatening children are child molesters and and at least one liberal blogger. (But that's OK because they the kid's father is a Bush supporter.)

Just how do these people manage to live with themselves?

People, being human, are always ultimately going to base their opinions on what is good for them, personally. In many cases, with our society shunning deferred rewards, would rather plunge into the scenario of basing their opinions upon emotional debate rather than reason. When the media floods us with images of horror, especially affecting the young or innocent noncombatants, the natural reaction is one of horror and dismay. But many people stop there. They don't ask the big questions of WHY such things occur. Those of us who do ask those questions are vilified as cold and unfeeling. I prefer to think we may be the only thing keeping us from anarchy. I have some questions, maybe someone else could answer them...
1. Why did the UN observers FILM THE KIDNAPPING OF THE ISRAELI SOLDIERS and do nothing?
2. After filming, WHY DID THEY LIE ABOUT FILMING THIS ACT? Was it politcal correctness, the need to garner European acceptance or simply a will to defeat any action that would put Israel in the light of being victimized rather than the oppressor?
3. Why has ANNAN and the UN remained silent and not offered any reproach for the inaction of the UN Observers? Think-if they had STOPPED THE ABDUCTION THIS WOULD JUST ANOTHER DAY AND THE WHOLE ACTIVITY WOULD HAVE BEEN AN ENTRY ON A FILE. Instead, the UN Observers once again have failed to avert catastrophe and in the end, when the smoke has cleared, there should be an international investigation into the disregard for Israeli human life.

Not that I am holding my breath for that to happen.

Thanks for your blog. I've read a lot and, though not terribly conservative myself except in fiscal and social matters, I feel your blog is very balanced and well-researched. I have enjoyed your coverage of the Israeli-Palestinian-Lebanese conflict. Keep up the good work.

My personal take on Israel: if I hear the phrase "disproportionate retaliation" again, I'll vomit until I'm dead. Israel has been a nation under seige since day one (and the many decades before independence). While I disagree with the continued occupation of the West Bank, Israel has mended its ways and let go of southern Lebanon, Gaza and soon (God willing) the West Bank. But no amount of withdrawal will appease groups like Hamas or Hizbullah. It is ridiculous and dangerous to imagine two groups whose charters specifically list Israel's destruction as their top priority sitting down at a table and being diplomatic. No amount of kiss-and-make-up can recall thousands of foreign-supplied rockets sent out over civilian targets in Israel.

That said, Israel should be looking at every country on the map to sit down and discuss the situation with and not just the US. Even hard-core lefty nations like England could lend a sympathetic ear if Israel would drop by. It should be planning alongside Lebanon to rout out Hizbullah (Israel in from the south + Lebanese army from the north = Hizbullah squeezed back into Syria). And it should even engage Syria in a discussion of cease-fire and truce. Israel's military might cannot change its neighborhood: these countries are there for good or ill. Regional dialogue must follow military exchange.