This Weeks Photo:
Where do old lifeboats go to die? Not to Amsterdam. If they make it there they seem to be reborn and given a new lease on life as private canal boats to take friends and family out on. Of course they are renovated to provide more room 'on deck' (mainly by removing most everything inside) and the fading orange is covered over with a paint scheme of the new owner's choosing. Seems like the cool thing to do there is to go cruising the canals, especially on Friday evenings: 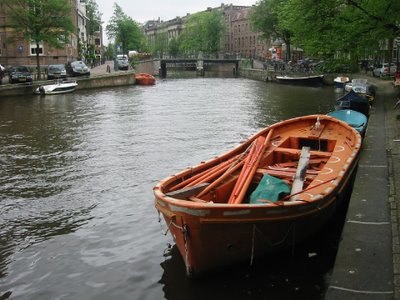 Virginia Virtucon has coverage of the nomination of Sean Connaughton for Maritime Administrator.

Maldives Shipping Today has information on the grounding of the SAFMARINE AGULHAS off London, England.

The Business of America is Business 'opines' about what labor unions mean when they claim to be against deals that compromise the safety of port workers.

News you Can Abuse has coverage of stowaways found dead inside a container in Miami.

Sailors, Mariners & Warriors League has news of a US Navy port call in Vietnam. Yes, in Vietnam.

EagleSpeak has news of the Indian Navy's efforts to keep an eye on the Chinese Navy and their new naval acquisitions.

The Black Kettle points out the threat from the sea.

'Kings Pointer' has news of her upcoming entry into the US Merchant Marine Academy, Kings Point as part of the class of 2010 which just happens to report on this Thursday, 6 July. (Little eager with her ID me thinks.)

In other USMMA-related News, Astronaut Mark Kelly (Kings Point class of 1986) will pilot the Space Shuttle DISCOVERY on this week's mission (STS-121) weather and foam-issues permitting.

IMO – piracy report – April 2006 - The IMO issued a Circular forwarding summaries of reports it received concerning acts of piracy and armed robbery against ships during April 2006. The IMO received 29 such reports for the month. MSC.4/Circ.86 (PDF) (5/31/06). - Dennis Bryant

Just discovered your site when I saw that we are listed on the same google search page! My son is an '05 grad of KP, and it just so happens that I know the "Kings Pointer" hopeful you mention above. Under most circumstances I would think you are right - but she has two older brothers who have paved the way - a graduate of the class of '04, and one in the class of '07 - and I believe she has a better than average chance of making it! Blessings!