Hopefully, your kid is not being used as a human shield. Take a look at this photo which shows the true nature of terrorists who have no regard for not only their lives, but for the lives of others, including children. (Possibly even their own.) 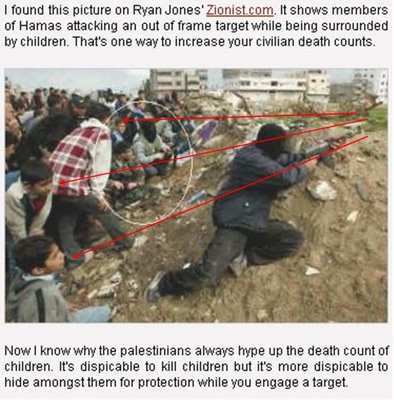 Conservative Thinking has more on the photo. The circle in the photo notes that there are two additional terrorists hiding under the children gathered around them. I added the red lines for clearer illustration, not that those three are in more danger than the others as a missile or grenade tossed that way will take care of all in the photo, including the photographer.

I don't get it, where are the parents. Even if these guys are their dads, where's mom? Where for that matter are the snipers. I am not saying to strike the kids. I just think that they would not be too eager to hang out with these guys once a couple get their heads blown off. (Before you post on that last comment, keep in mind that the guys they are standing behind are SHOOTING PEOPLE!)
.
Posted by Fred Fry at Wednesday, July 19, 2006

Who says this is an actual situation? It could as well be a training/show/live-propaganda event by Hamas or some other group.

In real situation that cameraman was either very brave or very stupid.

Mighty brave accusations based on one photo. Even terrorists aren't that stupid.

Is this a real or staged propaganda event?
- If the event was staged for propaganda, then I seriously doubt that the photo would:
a) Include children in the picture, which leads critics like myself to charge that they are using children as human shields.
b) Show the terrorists hiding from the enemy. Instead the terrorists would be in the middle of some brave action against the 'enemy.'

Concerning:
"In real situation that cameraman was either very brave or very stupid."
- Either way the cameraman is a tool of the terrorist. If he wanted to be brave, he would have been on the receiving end of the terrorists attack.

"Mighty brave accusations based on one photo. Even terrorists aren't that stupid."
- I see terrorists hiding amongst children. Is this where you want your children playing?
- Are you a complete idiot? Look at the picture again.

"Anonymous" is posting from Finland.

You know what, perhaps your right. However, the staging of events does put into question everything that is presented as coming out of Palestine.

I find this thought more troubling. See the updated post as noted at the top of this one.

I'm not a complete idiot, thanks anyway.

You seem to think everything from one side only, you are extremely subjective, and on more than many occasions just plain wrong.

And you call me an idiot. Thanks, again, I feel sorry for you really.

If you feel like insulting me further please email me, so you don't embarrass yourself more online.

"You seem to think everything from one side only, you are extremely subjective, and on more than many occasions just plain wrong."

How about explaining just where I am wrong.

How about taking another look at the photo and the one I am adding today and justify the actions of these gunmen to those of us who thinks these men are nothing more than criminals endangering these children.

Go ahead, keep defending these criminals.