Here is a picture of chickens on their way from the US to Puerto Rico. I was told that the 'flat-rack' container had approximately 8,000 chickens on it. At least when we left port in Jacksonville it did.

These are pictures from the afternoon after leaving port. That morning I was awoken by the Chief Mate with the question "Are You seasick?" The ship was rolling badly, but I had already been on the ship for two months so I was somewhat confused by the question as he knew that I did not get sick. I answered no and was told to see the Captain. When I got up to the bridge the Captain asks "Are you seasick?" "No Captain." I replied. "Good. Go forward and help with the chickens."

When I got on deck, I could see that some of the chicken coops on the bottom of the flatrack were crushed. Those stacks were now hanging over the side of the ship. There was chicken poop and eggs everywhere. Chickens were loose on deck. And many chickens were crying (for lack of a better description.) Then there was the smell which defies description. We next spent the next couple hours sorting the mess out. Stacking cages on deck and throwing dead chickens over the side. When we got to Puerto Rico, the crane positioned another flatrack alongside the ship by the chickens. The longshoremen came to unload the chickens would grab a cage and then instead of placing them on the flatrack would drop the cages to their buddies 40 feet down on the dock who quickly emptied the cages and placed the chickens in their cars in a blantant act of pilferage. Once their cars were full, they unloaded the rest. Of 8,000 chickens, we were told that only 5,000 were received.

A month later the bosun gave up trying to scrub the smell off the hatch cover and had the whole thing painted over. 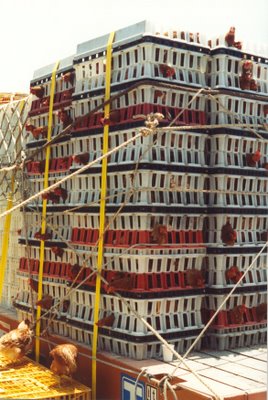 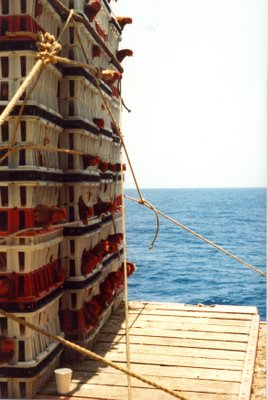 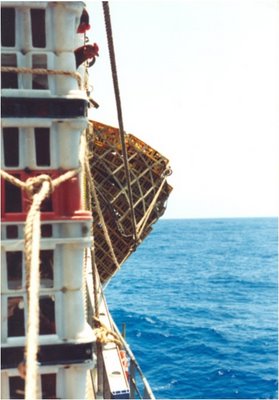 Gates of Vienna has a two-part post. First there is coverage of some recent pirate activity in the Straits of Malacca, which so happened to target UN relief supplies. The second post highlights a reader's comments to the suggestion that the UN could solve the pirate problem by simply declaring them NGOs.

Speaking of pirates, EagleSpeak has news of the UK's determination that they have underestimated the threat of piracy.

Confederate Yankee covers Operation Enduring Service and their plan to preserve historic vessels as well as use others as 'First Responders' for future disasters.

Hello Estonia has word that the EU will be taking Finland, France, Italy, Greece and Portugal to court over not meeting EU port waste requirements.

The Gray Monk has photos of the SA AGULHAS aground off East London, South Africa.

MarEx Newsletter has coverage of a $1 million fine against Pacific-Gulf Marine (located in US) for illegal discharges of oily-waste at sea. Picture of the vessel here from 1999. The recent 'history' of US-Flag Car Carriers covered under the Maritime Security Program is summarized by Global Security dot Org.

Sailors, Mariners & Warriors League has coverage of the protests on the STOLT AUSTRALIA over (well-founded) fears that the vessel will be reflagged from Australia to the Cayman Islands. (Note: The crew has returned to work, for now.)

Benjamin has coverage of the fire on the offshore 'nation' of Sealand. The post is aptly titled "The Whole Country is on Fire."

Mainichi Daily News has the news of Japan banning vessel traffic from North Korea for the next six months as part of sanctions for NK's missile program.

Florida Maritime Lawyer notes that he has 'adopted' the Wikipedia article on Admiralty Law as his own in order to clean it up.

Ocra Worldwide has a story on the Cyprus Maritime Conference where speakers discussed the Flag's recent decline from 5th to 9th largest.

UK – text-messaging leads to vessel grounding - The UK Marine Accident Investigation Branch (MAIB) released the report of its investigation into the grounding of a container vessel on Trindelen Bank in the Baltic Sea on 5 January 2006. The ship grounded at night in good weather on a charted shoal. It appears that the Officer of the Watch (who had sent the lookout below) became engrossed in text-messaging on his cellular telephone and missed a planned alteration of course. Report No. 17/2006 (7/6/06).. - Dennis Bryant