Here are more pirate attack photos. Best is that they use Molotov Cocktails as part of their defense strategy as suggested in my post "On Defending Unarmed Merchant Ships Against Pirates" (Are they drinking on board? Looks like the company owes them a couple rounds at the next port, AND A BIG FAT BONUS!)
Photos found via the UK's Mail Online's story "Pictured: Desperate Chinese sailors fight off Somali pirates with beer bottles and Molotov cocktails" and reproduced here for the benefit of seafarers: 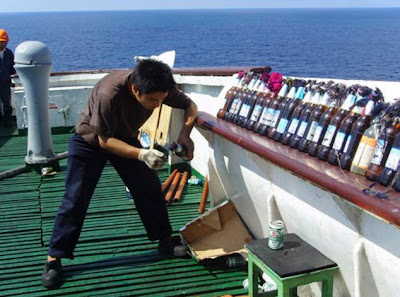 - "Standby to repel boarders: A Chinese sailor lights a Molotov cocktail before throwing it overboard at Somali pirates" - 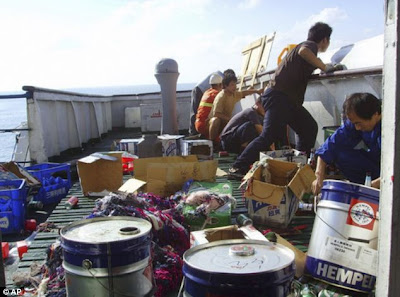 - "Peeking over to see the damage inflicted on the pirates, a Chinese sailor and his shipmates prepare more missiles to throw at the bandits" - 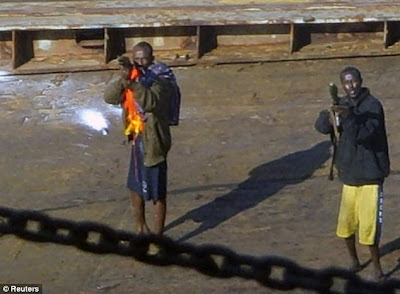 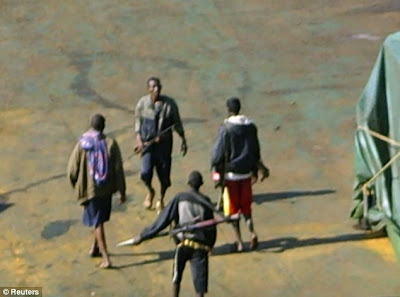 - "Four of the nine pirates wander about the deck of the Chinese cargo ship. To prevent the vessel falling into their hands, the sailors had locked themselves in their accommodation area" -

- Having been blasted with gunfire from two helicopters, the Somali bandits climb back aboard their speedboats and flee to their hideout -
Seems that they did a great job fighting off the pirates, especially given that they had boarded the ship. One item that can be improved on is better protection for the seafarers who are fighting back, such as better armor in the areas they are using as defensive positions. As seen in my previous pirate photo post "Pirate Attack Photos - M/V KAPITAN MASLOV" RPGs can go right through soft ship steel.
Great job. Lets see more of this.

These guys know how to improvise. There are ways to keep pirates from boarding, however there is no absolute full proof methods. Some basic rules: Never stop the ship, use maximum speed, evasive maneuvering, but the best thing you can do is Be Prepared. We actually issue air tasers, stun wands and bolo machetes. If a grapple hook is thrown on the rail, cut it off. In defending a ship you have the advantage of elevation and maneuverability. From experience, I can tell you it is not easy to board a vessel underway carrying an M-16, climbing a rope or ladder and be prepared to use the M-16 at the same time. By the way, gas works good too. Gotta give these guys a hand, they improvised and bought enough time for help to arrive. Michael seamarshals@yahoo.com