I managed to pick up a refurbished .30 caliber M-1 Carbine at the last Gun Show held in November. It was pretty hectic there with it being the first gun show after the Election. I was not interested in anything that is on the moonbat's immediate hitlist, but still wanted to get a 'new' rifle. I really enjoy shooting my .22 caliber Iver Johnson M-1 Carbine so figured that I might as well pick up a real one.
So, I am now the proud owner of an early model Underwood M-1 Carbine. (No bayonet lug and flip sights...) the rifle was refinished and looks like new. I purchased the rifle from James River Armory.

Managed to get it to the range last night and shoot it for the first time. It shoots great and was fun to shoot as well. 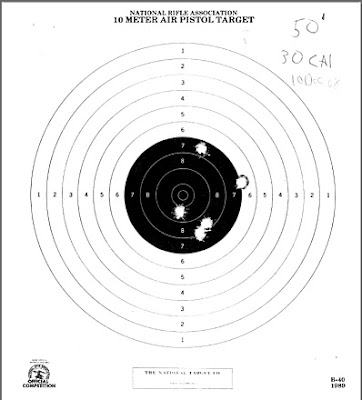 First day - 5 Rounds Standing at 50 Feet
I went with two friends and they really enjoyed shooting it also. Neither currently owns any weapons but I suspect that their situation will change soon concerning that. I also had a new pistol at the range. More on that one next week.
--------------------