The M/V BISCAGLIA was taken over by pirates last month. Of interest was that the ship had onboard a three-man security team that once the ship was lost jumped overboard on the chance that they would be picked up by a nearby helicopter.
Here are a couple photos that were taken by another helicopter that had initially come to the aid of the ship but it was all over by the time they got there, other than the fate of the unsecured security team.

The photos were found on the UK's Mirror site under the story on the event: "Heroic Brit trio take on Somali pirates before escaping into sea" They are reposted here in the interest of seafarer safety. 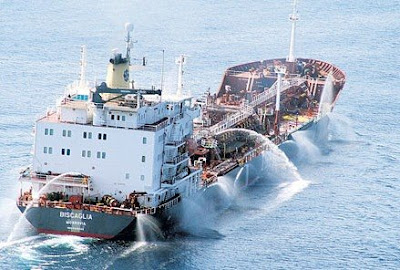 - MV Bisaglia fires water cannon to try and repel invaders -
Can you see the LRAD in the photo above? I can't. 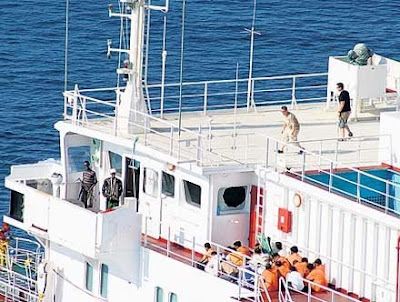 - Pirates hold crew at gunpoint - Mike & Rocky watch from above -
There appears to be a broken window in the photo above. 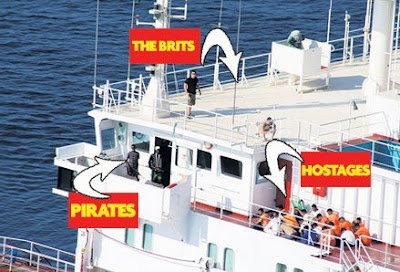 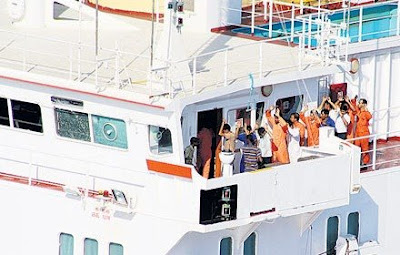 - Gun-toting pirates force the crew inside the bridge -
There appears to be a shattered bridge window in the photo above. 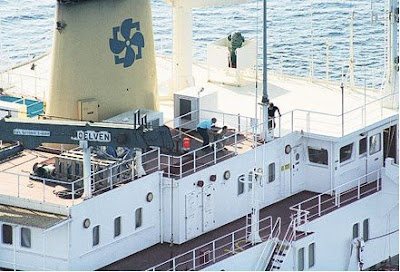 - Ex-British soldiers up on the deck preparing to jump in the sea -
Go read the story for a summary of the event as provided by the head of the security company.

Keep in mind that they were not able to defend the ship with firearms. They had an LRAD device (See gCaptain's summary: LRAD - Video Of An Amazing Anti-Piracy Device) but according to the articles the pirates were not deterred at all by it.

“We thought it would make the pirates back off, but they just laughed. It was a total waste of time.” - Mirror, UK

I wonder about that since according to the video linked above, the device is currently in use in Iraq. I would think that any problems such as this would have shown up by now. Didn't they test this thing on themselves before boarding this ship? I would think it would be a good idea to understand what they are doing to the people they aim the thing at, at least at a lower setting. (The highest settings reportedly can cause permanent injury.) Keep in mind that this device was claimed to have ward off the pirate attack against the cruiseship SEABORNE SPIRIT. (See more video here: LRAD: Long Range Acoustic Device)
Update: 12/31/08
One last thing. Take a look at the top photo. All that water being sprayed over the side looks nice, but all those running hoses surely kept the water pressure on each low. The point of using a fire hose against pirates is that the high pressure of the water stream is something that you can't advance against. As it is a fire hose under full pressure should have three people manning it in order to safely control it. The spray from the hoses above does not seem to have enough pressure to do the job. (Now it could be that the fire pump is not running at full pressure at the time the photo was taken.)
Cross posted on gCaptain here.

I appreciate this post you have put up. The Brits look like a few tourists that have taken a ride on a ship. It appears that they have no equipment at all, not even proper uniform that could deter pirates from thinking of boarding in the first place. I have a Sea Marshal company for ship protection and seeing this makes me more proud of our men and tactics. Nothing against Brits but obviously that company does not have the experience to properly defend a ship against piracy. Michael, seamarshals@yahoo.com

as per our information the ship is left with food and water to last for only 5-6 days.i am personally involved with a crew member. pl.anybody guide me as to what can be done so that this message goes to the owner of the ship?what can be done to get the owners of the ship to reveal us the state at which talks with pirate are proceeding.pl help.

You might want to contact the crewing company that hired your seafarer and try to get information from them that way. (Assuming that he was hired by such a firm.)

I would like to think that the owner of the ship is somewhat aware of the conditions onboard. Sadly it is the responsibility of those currently holding the ship to deal with the water and food situation, even if it is to demand more food for the crew.

I can assure you that the crew is taken care of since the motive is financial gain. i say this from experience. A comment on the LRAD, this device is not the answer. It can easily be defeated with proper hearing protection and it is directional only. this means if you are attacked by multiple aggressors in different directions, you have a big problem to rely on the LRAD. seamarshals@yahoo.com

By the way, how could they have done all they could to protect the ship? they never left the flying bridge

just received a call from one of the victim of biscalgia ship.the talk about ransom money is not acceptable to the pirates and piartes have warned the crew member of dire consequences in case talks fail before 48-72 hours.this post is only to make public aware about the way owner of the ship is bargaining with the lives of crew members.the office of the owners at mumbai when called just now,is unattended at phone no 40502100.where do we pass our grief and ask for information?

As a civilian landlubber I am amazed and appalled that the captains have virtually no recourse to defense of their vessels. Firehoses and Axes? LRADS? That is an insult to the sailors putting their lives on the line to deliver goods.

This so-called Piracy is no different from the Drug Traffic faced in Latin America and a similar International War On Pirates Should/Must be declared.

The French are actually trying, but delivering the pirates to the Somali Coast Guard (per international requirements) is a joke - they will be back to pirating before the day is out.

- Where are the ship owners on this?
- Why can't / won't they bring the pressure needed to properly arm vessels or provide Military Support?
- Why do major Ports ban legitimate registered vessels who happen to arm themselves to protect life, ship, and cargo ?
- Why can't an armed vessel have the ability to secure weapons with locks and customs seals (just like cargo) upon entering port?

The so-called non-lethal deterrents clearly do not work and failing the above I can only see the following recourse:
- Build your own 2" compressed air deck cannon, in theory to fire rubber shells, but load it with molotav's as needed.
- Build your own Compressed air cannons, but make them robust enough to handle 2 pound charges of Black Powder with Cannister Shot.
- Engage Blackwater, Sea Marshalls, or the like; deploy a properly armed squad with M-60's, M-16's, and their own RPGS, picked up and dropped off outside the authority of the ports
- Arm yourselves and damn the ports: a dozen SKS carbines can be had for less than 150 EU each and secured in a hidden locker.

- Get the *truth* out to the press!
The Great Unwashed Public is blissfully unaware! Until the Bread and Circuses are interrupted nothing will happen!

I realize this is difficult, but organize a Seafarer's Blockade and refuse assignments in this region until the pirates are wiped out.

That entire region of Africa is in an unfortunate state of chaos - whilst I feel for the innocent civilians that are affected,
the lawlessness will continue as long as it is both profitable and tolerated.

Paying them off is stupid and shortsighted - as Kipling said, "once you pay the Danegeld, you never get rid of the Dane" (no offense to the Danish)

grumpy old guy
(get off my lawn)